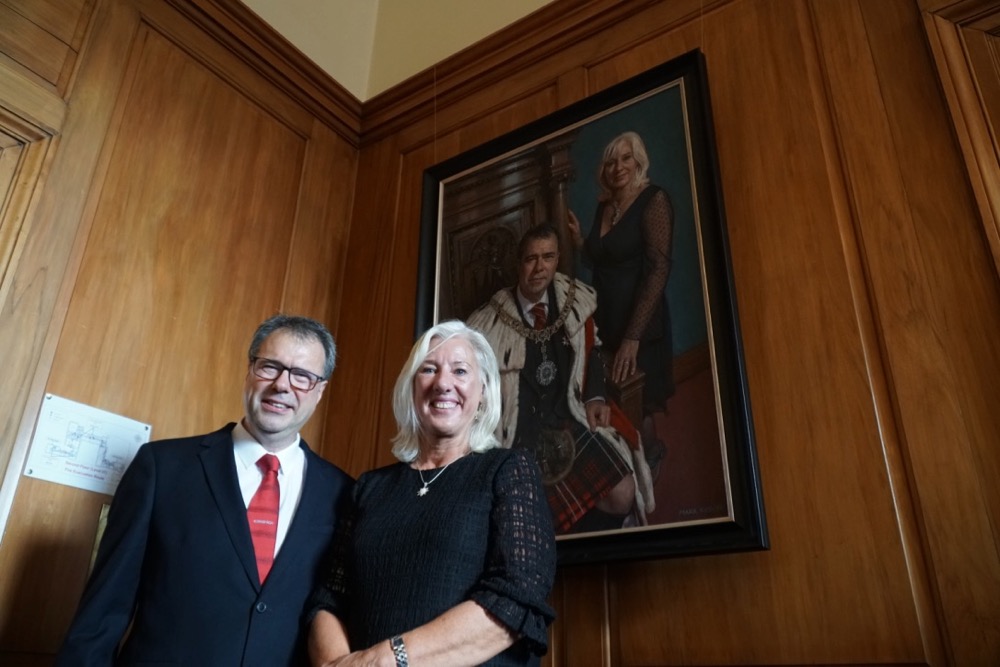 The portrait of the former Lord and Lady Provost, Councillor Donald Wilson and his wife Elaine, was unveiled by the current Lord Provost Frank Ross earlier today at a small ceremony.

The portrait painted by Mark Roscoe now hangs in the Dunedin Room alongside portraits, both painted and in photographic form, of previous Lord Provosts produced to recognise their time in office.

The council paid for the portrait of Councillor and Mrs Wilson to be produced in photographic form, and the difference to allow a painting to be commissioned, was paid for by a number of public donations.

The Lord Provost Frank Ross welcomed the new painting to its place alongside the portraits of the other esteemed former holders of the office. He commented : “Congratulations on a job tremendously well done. I am only beginning to get an understanding of how much hard work and commitment is required to deliver the service, and I think it is service, to the capital. Donald you have left a tremendous legacy out there in the capital.”

Donald Wilson said that he loved the painting and said that he and his wife felt very honoured to have been Lord and Lady Provost and that he feels the portrait is a very fitting tribute.

He recounted some of the stories of what happened during his time in office, when he took up running and completed several marathons raising money for the OneCity Trust, the Lord Provost’s charity.

He said that he and Elaine both really like the portrait and that Elaine has an air of real strength in the painting. He said that from the start they had each decided to pick their own roles during the five years.  The former Lord and Lady Provost were married in the City Chambers during his time in office.

Mark Roscoe is from Kirkcaldy and attended Duncan of Jordanstone College. He is a member of the Royal Society of Portrait Painters and has previously painted 33 members of the Faculty of Advocates, and lots of people from Oxford and Cambridge colleges.

Interestingly he has also painted the Lord Mayor of London and the Mayor of Kensington and Chelsea, but never a Lord Provost of the City of Edinburgh before.

He explained the process to The Edinburgh Reporter : “Nowadays I try to minimise the sittings. In this case we did two or three sittings and then the gold chain was brought in at the end. It was difficult to reproduce the chain. I try to get everything I need in as short a time and as quickly as I can. I take lots of photographs and some sketches to try and keep things fresh. A sitting would have meant the couple sitting for a couple of weeks at least, I would have had to get mannequin dolls to model clothing – it could have taken up to a year!

“It was hard to find the style I wanted to use. I can paint in several styles with a photorealist image on fine canvas and board, but I don’t really like that. I could have also done an impressionistic painting.

“But I decided on a painting where they both look like themselves, they have the right expression but it is still a painting. I enjoyed the sittings and it was very nice to chat to them during the process.”