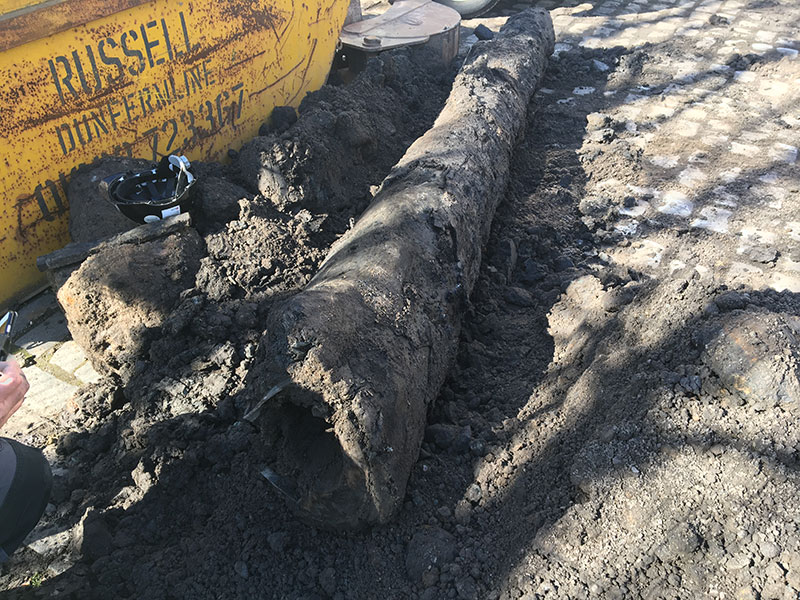 Workers have unearthed rare 260-year-old wooden water pipes during a dig in Edinburgh.

Fifteen pieces of the elm piping was unearthed during excavation work at George Square, where a new underground heating system is being built by the University of Edinburgh for its new student centre.

The wooden pipes were part of an underground network of pipes to supply drinking water which was built in 1756. It ran from the Comiston area of the Capital to the Royal Mile.

Archaeologists called to examine the find – used to bring the “sweet water of the country to the centre” – describe them as being in “very good” condition.

Lindsay Dunbar, Fieldwork Project Manager for AOC Archaeology Group which carried out the excavation, said the pipes fixings of metal bands and lead fittings were “very typical” in wooden pipes used across the UK in the 18th century.

She said: “To uncover these water pipes preserved in situ beneath the cobbles was just incredible. Whilst the use of such wooden pipes is well-documented and preserved examples exist within museums and collections, to find the pipes in situ is much rarer.

“These are first examples we have ever excavated in more than 25 years as a commercial field unit. The level of preservation was very good and allowed important details relating to fittings, construction, size, joining techniques to be recorded prior to their removal.”

Although similar pipes have been found before across the Edinburgh’s Old and New Towns, this is the first instance of a section being archaeological excavated in recent times. The City of Edinburgh Council’s Museums have several examples of these pipes within their collection including examples on display at the Museum of Edinburgh.

Bill Elliot, National Stakeholder Manager at Scottish Water: “This is an amazing find for our customers in Scotland’s capital who have the opportunity to see first-hand how water was distributed in years gone by.

“These pipes made up the first dedicated water supply in Edinburgh, and when the pipes were brought into use the town council described how they would ‘bring the sweet waters of the country to the centre’.

Records held by Scottish Water show before the wooden water pipes were laid residents could go many weeks without fresh drinking water.

Councillor Donald Wilson, Culture and Communities Convener, City of Edinburgh Council, said: “This is quite a significant discovery and the first time archaeologists have unearthed the city’s original plumbing system for a long time.”

“Similar pipes were discovered in 1894 in West Register Street. Made from hollowed out elm they date from the 17th to 18th centuries and were used to supply water to Edinburgh’s Old Town from springs like those out at Comiston. In fact, we have two sections of it on display at our free to visit Museum of Edinburgh in the Canongate. It’s pretty fascinating.”