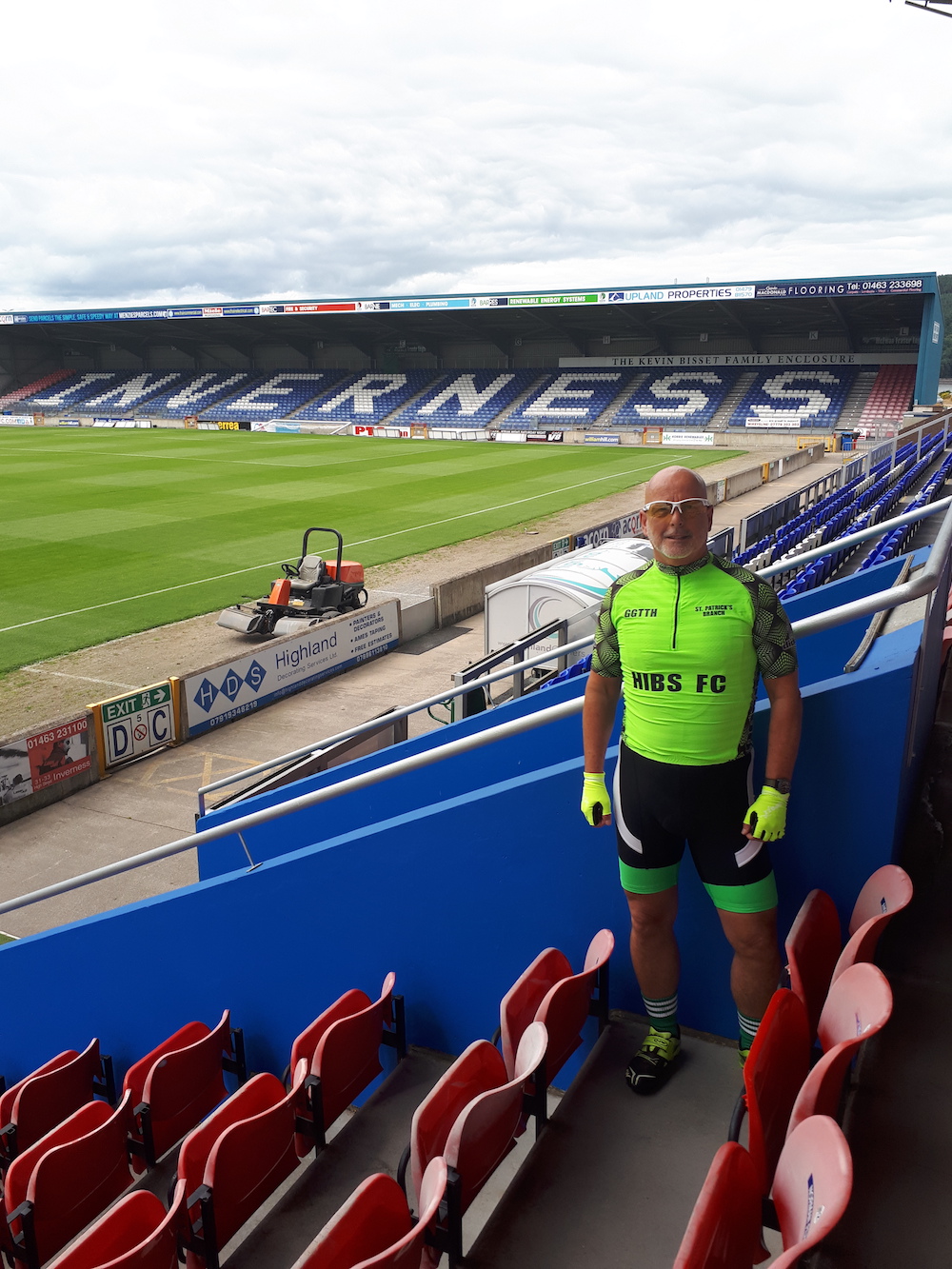 Hibs’ fan Hugh Cockburn has completed the penultimate leg of his amazing quest to visit all the football league clubs in Scotland in memory of fellow St Patrick’s Branch member Shaun McKinley who sadly passed away after a brave fight with sarcoma cancer on 31 Dec 2016.

This time Hugh visited the Highlands where he received a warm welcome and was provided with some good old Scottish hospitality. Next month he will return to Scotland to complete the ride and plans to visit, amongst other grounds, the home of city rivals Hearts.

Hugh told the Edinburgh Reporter: “On Wednesday 18 July I got the train up to Dingwall from Newcastle, arriving about 1.30pm and headed straight to Victoria Park, home of Ross County.

“A short journey of 15 miles and a nice ride over the Kessock Bridge, saw me arrive at the Tulloch Caledonian Stadium and Inverness Caley FC. There I was met by a nice man, Jim Oliver, who gave me a tour of the stadium and took my customary photos.

“I also managed to squeeze in a visit to Highland League side, Inverness Clachnacuddin before bedding down for the night. “The next day saw me set of for my destination for the night which was Buckie. On route, I visited Station Park, home of Nairn County (Highland League), Elgin City and Mosset Park Forres Mechanics (Highland League).

“72 miles saw me arrive in Buckie, where is still had time to visit Victoria Park, home of Buckie Thistle (Highland League).

“Before heading to my B&B for the night, I stopped for much needed refreshment at the MOTION FITNESS, where a lovely lady, Claire Gardiner, made me a wonderful protein drink.

“We had a nice chat about my ride, the reason I was doing it and she amazed me even further by donating £10 to the charity. lovely gesture from a lovely lady. “On the Friday it was Buckie to Peterhead. Before leaving Buckie I was treat with more generousity when my hosts for the night gave me another £10 for charity.

“My first stop of the day was Banff and a visit to Deveronvale FC (Highland League), then on to Turiff United (Highland League). It was then on to the Balmoor Stadium, home of Peterhead. There I was hosted by a lovely gentleman named Martin, who did the honours with a tour and photos. I was then blown away when two fellow St. Pat’s members who live locally arrived to say hello, courtesy of Big G, Shaun’s dad.

” Larry and Marshall were amazing and just the tonic I needed after 64 long hard sweaty miles in the saddle. Thank you so much guys, you were true gents and a credit to our great club. “Marshall also handed me £60 donated by his work. Larry then gave me an escort to my digs for the night, kind people up north!!!!

“On Saturday I cycled 40 miles to Aberdeen train station for my train back to Sunderland. This was the leg I was most wary of but it turned out to be one of the best, in terms of scenery, weather and people.

“I now have one team left to visit, Edinburgh City, where I intend to cycle to from Perth at the end of August, having already visited St.Johnstone.

“I aim to visit on route, Murrayfield, as it could become home of Scotland National Football Team, Tynecastle and its new stand and both homes of Edinburgh City, Ainslie Park and Meadowbank. I will then finish my quest at Easter Road where it all began last May.”

Donations can be made on Hugh’s Just Giving page.