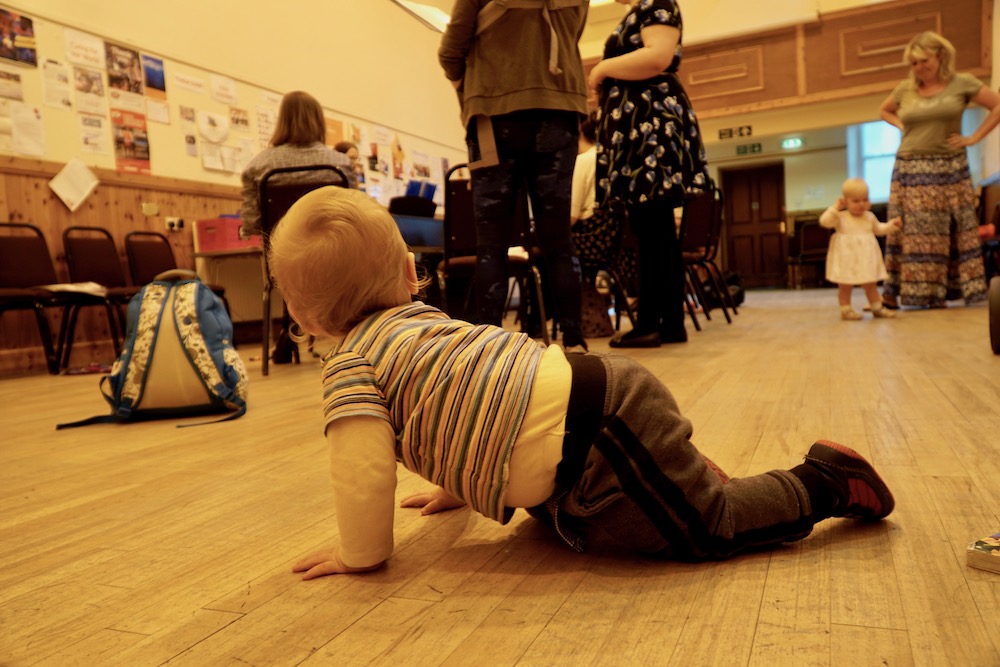 When Lynnette’s daughter, Korra, was just 9 months old she went walking with Elspeth who organised buggy walks in Leith.  By chance she mentioned that she is a music teacher specialising in singing.

Lynnette explained : “I had always wanted to run my own choir and Elspeth suggested setting up a maternity choir. It almost seemed like a throwaway comment, but over the following week or two, I began to realise that this was an amazing idea! I told Elspeth that I was going to do it and she wanted to help me set it up.

“It was perfect, because I could take Korra with me while I took the choir and Elspeth could look after Korra and help out with the teas and coffees after we sang. Now that Korra’s at nursery, I run the choir on my own and I love it.”

The Edinburgh Reporter went along to one of the Melody Mummies sessions when they were learning A Whole New World and Feeling Good. Interspersed with a bit of noise from the babies, it was a lovely way to spend an hour in the afternoon! And then the mummies got tea, coffee and a chat with each other.

If you have a baby or toddler you might like to join the Melody Mummies choir which meets every Wednesday at 1.30 at Leith St Andrews Church… they were sounding good when we met up with them! pic.twitter.com/kFXSgzHXWW

What struck me was that the babies were spending quality time with their mothers, away from mobile phones and housework and everyone was getting something out of it. Even the baby who simply fell asleep straight away! Babies and toddlers were there and it has to be said that mostly they were fairly quiet during the rehearsal.

Lynnette continued : “The thing that stood out to me when I was a new mum was that there were loads of groups and classes and such for new babies, aimed at them. This is fantastic, and I really appreciate that, but there doesn’t seem to be much for the mums or dads themselves.

“With Melody Mummies, the focus is on having something fun for mums to do that they can bring their babies along with them. The bonus is that babies love to hear their mums sing. I thought that having something for the mums was so important, as it fosters a sense of self as opposed to just being ‘mum,’ and since I suffered from post-natal depression, I thought this was so important for others.

“Singing is also known to help a lot with mental health, not to mention the fact that it is a fantastic way to socialise, especially if you’re a bit of an introvert, and joining these groups is daunting. If you don’t want to chat, then you can sing!

“I had originally wanted it to be a parent choir, and I know shared parental leave is becoming more and more popular, but my worry was that since men have such a different voice type to women, if only 1 or 2 men showed up, their voices would be too obvious which could make them feel somewhat isolated.

“My plan for the near future is to start an evening choir for mums as some of the mums only left because they had to go back to work, and some have told me since how much they missed it.

“My plan for the not so near future is to set up a Dad’s choir and perhaps even have them sing together in shows, and also a parent and child choir to foster parent-child relationships. A family that sings together, stays together!”

There is a website where you can find all the information about Lynnette and the Melody Mummies choir.