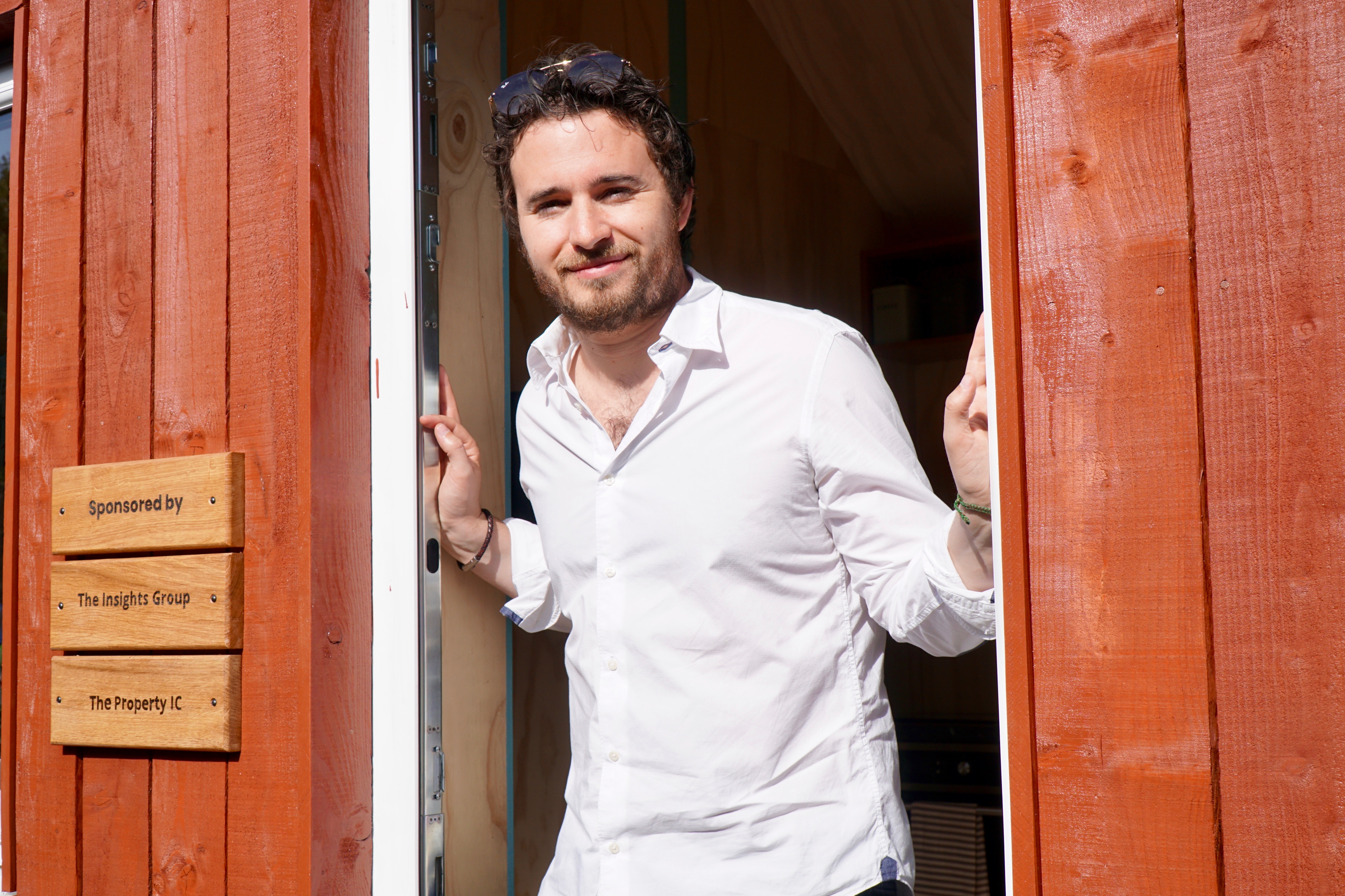 This is the charity which brought George Clooney and Leonardo DiCaprio to Edinburgh, and which made hundreds sleep out in Princes Street Gardens last December, and it seems that it is all down to Josh’s determination and drive.

The Social Bite Village is the latest in a long line of his many  accomplishments. This plans to give homeless people a chance to get off the streets to go and live for a while in a community of Tiny Houses set up in Granton. There they will be helped by Edinburgh charity Cyrenians to get back on their feet, no matter what their problems are. It was there that I met Josh Littlejohn and got him to sit still for ten minutes to talk to me.

What did you get your MBE for?

Emmm… services to homelessness I think. Can’t really remember! (The official citation is for services to social enterprise and entrepreneurship in Scotland.) How much has it cost to build the Social Bite Village?

This project in total has cost about £750,000 in the end to do , but that is probably half the cost it should have been. We have had so much donated in the way of expertise, architecture, engineering the groundwork, most of the materials that make up the houses were all donated from over 100 companies in the construction industry so there has been a phenomenal amount of support to allow us to deliver it within that budget.

The Sleep Out in Princes Street Gardens raised around £4 million, so what are you planning to do with that money?

Housing First is trying to help people who find themselves homeless – primarily rough sleepers and people on the streets who are the most severe instances of homelessness, helping them into mainstream flats.There is also quite a structured comprehensive and flexible support resource to wrap around that tenancy so we are just about to embark on quite a significant programme across five cities.

Is that not something which councils should be doing?

Well one of the things that is challenging for local authorities is to dual fund two systems simultaneously. At the moment the vast majority of homeless people in Edinburgh live in bed and breakfasts which are privately run for profit. The council spends on average £6 million per annum on that kind of accommodation which is a vast amount of money. I think that is probably their whole budget to spend on homelessness!

It is difficult for any local authority while funding the existing homelessness system to fund the new one. I think we can’t do it by any stretch alone and we certainly cannot do it in the long term but one of the things we want to do with the monies raised it to help to catalyse and to stimulate a broader structural change. So we will be working with the council and The Scottish Government to push that programme forward.

How will you choose the people who come to live here?

We are working with the Cyrenians to choose the residents. It is largely done as an opt-in. In most homelessness services there is very little choice and the choice is that you are told where you will live.

The plan here is to advertise it across hostels, B&Bs and night shelters but also through our Social Bite shops where we engage with hundreds of homeless people. We have already had a few referrals from that channel. People will then apply to come and live here and Cyrenians are running the process to select people to build a community. What will happen to the residents when they come to live in the Village?

The whole thing is based on the idea of community where people will support each other. We envisage that people will live here for 12-18 months supporting each other to get back on their feet with the intensive qualified resource too. What else will residents do while they are here?

There are loads of plants around which will need to be kept and right next door there is the Walled Garden and the community group there will invite the residents in to help out. But there are also lots of links to mainstream employment. Lots of employers have pledged employment opportunities, we have a relationship established with Edinburgh College who are offering quite tailored and flexible academic courses. So if people want to get trained or qualified in a particular area they can do that.

We are very outward-looking and hopefully people will get new experiences, employment or education or whatever they want out of it.

This and our Housing First programme are our main objectives in terms of future plans.

“Between this and Housing First these are our main objectives in terms of our future plans. I hope we can keep up the momentum in terms of pushing the brand raising awareness around homelessness, and raising money.

Can we get to zero homelessness?

I believes that it will be possible to reach zero homelessness in Scotland. The statistics as I read them if you break them down city by city, they are not that big. It is simply a matter of focus  and I hope this project will help with that. With the Scottish Government and local authorities all behind this then I believe that homelessness could be a thing of the past.”