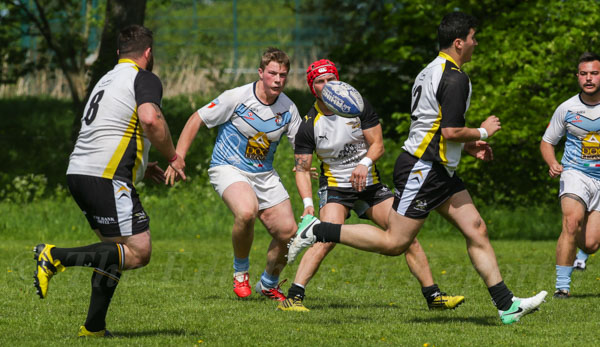 Eagles show the Roosters how it’s done in Edinburgh In another warm and sunny day, Edinburgh ran out winners in a scoreline that did not reflect the effort and commitment of an Italian side who never gave up.

The visitors chose to start the game and a promising first set of six for Edinburgh saw Mark Robertson run from inside his own half only to be tackled short of the try line. This was perhaps a sign of things to come although the early stages saw both sides complete their sets with neither dominating until a high ball from Eagles on the 5th tackle near the Saluzzo line wasn’t dealt with and Nick Hanmer was on hand to pick up the bouncing ball to run in under the post for the first try of the afternoon, converted by Stuart McBain to give Edinburgh a 6 – 0 lead.

From the restart, the Eagles continued to pressure the Roosters, disrupting their rhythm with some strong tackles and continuing to stay on top by allowing the ball do the work in the warm conditions, using the full width across the field as they sought to find a way through the Italian defensive line. This finally paid dividends when the hard running Doug Watters was on the end of a cross field movement in the left centre position to go over for the second try of the afternoon to give Eagles a 10-0 lead.

Soon afterwards, a dropped high ball saw Luke McKinney go over to extend the lead to 14-0 and Saluzzo appeared to have no answer to the Eagles, who were ably moved around the field all afternoon by half backs McBain and Lewis Clarke.
The Italians never gave up but the Eagles pressure continued and they were soon gave up another try, this time by Robertson who intercepted and ran in unopposed under the posts from thirty metres. This time the try was converted by McBain to give Eagles a 20-0 lead.

Although this was a friendly, neither side let the intensity drop and the defence from both teams was, at times, ferocious which saw a number of players taken off for injuries, although thankfully none were serious. The enforced breaks in play did disrupt the flow of the game but not the determination of the Eagles to put on a good display in front of the onlooking spectators, who boasted two Scotland Rugby League representatives among then, all of whom would have been entertained with what they were seeing.

The Eagles finished the half with back to back tries, both scored under the posts. The first by Terry Logan, closely followed by a second of the afternoon for Luke McKinney. McBain added the two conversions to give Eagles a 32-0 lead at half time.
The second half was a much quieter affair and whilst the flow of the game remained as one of Eagles pressure, a combination of improved defence by the Roosters and the hot weather resulted in a much lower scoring affair.

Saluzzo had the first chance of the half to score but were unable to get over the whitewash. This resulted in an Eagles attack which saw a high ball bouncing desperately in the Saluzzo in-goal area and finally picked up by a Saluzzo player who was able to evade Eagles defenders to race down the field, only to be tackled short of the goal line, much to the disappointment of the watching crowd who by this time wanted the visitors to score. The visitors did get their reward their efforts deserved when hard-working forward Leonardo Grasso scored the opening try of the second half. Unfortunately though this wasn’t to signal a change in fortunes as happened for the opposition last week and it was Eagles who scored next with a try by Seb Jablonski on debut for Eagles. He will, no doubt, remind his son of this fact as he too was also playing his first game for the Eagles. The Jablonski try came from broken play following another Robertson run which had the Saluzzo defence at sixes and sevens. Sadly he just didn’t have the legs of his younger days to finish however it did allow the Jablonski try to be scored on the next play.

Although the Saluzzo defence was tighter in the second half, Eagles remained in the mood to score and finish the game with two tries. By coincidence, the scorers were the same as those who rounded off the scoring in the first half.This time though, the first came from McKinney, to complete his hat trick, and finally Terry Logan, who switched to the centre, ran in on the left edge after running over two tired defenders to leave the final score at Eagles 44 – 4 Saluzzo North West Roosters.

Eagles coach Barry McGuffog said; “I’d like to thank Paolo, Marie and the rest of the players, staff and supporters who made the trip over and contested what was a highly entertaining game played in great spirit. They’re in a similar position to ourselves in terms domestic fixtures so play their regular rugby in the south of France.”

“Obviously it was disappointing that Strathmore pulled out on Friday afternoon, but after some quick discussions with Paolo at the Roosters and with our lads, we were able to get a full sided game arranged in place of the 9’s which ultimately will have benefited our guys more. We got another eighty minutes under our belts and were able to build on last week’s performance, righting a few wrongs and putting things we’ve practiced in training this week in place. We’ve got Cramlington away next week which allows us to continue building towards the cup game against Gateshead Storm on the 26th.” 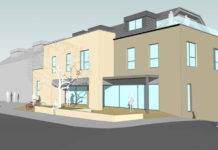