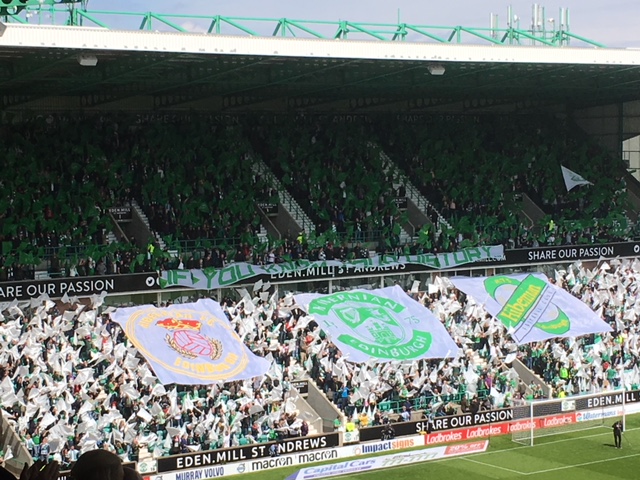 Hibs ended the season in fourth place with a record number of points after one of the most remarkable games of football ever seen in the capital.

Ten goals, numerous booking, a red card, a number of disputable refereeing decisions and Neil Lennon sent to the stands for celebrating a late equaliser by running onto the pitch imitating an airplane in front of the Rangers fans.

Lennon made three changes to the starting XI that lost the Edinburgh derby in midweek. Martin Boyle, Darren McGregor and Brandon Barker made way for Vykintas Slivka, Jamie MacLaren and Dylan McGeouch.

Neil Lennon took his place in the dugout and received a terrific reception form the Hibs’ fans who belted out ‘There’s only one Neil Lennon’ in his honour.

The game started at a frenetic pace then got faster.

Hibs opened the scoring in the 10th minute after Jamie MacLaren was bundled to the ground as he was trying to get on the end of a Slivka cross from the right. Referee Andrew Dallas pointed to the spot and Florian Kamberi fired a brilliant penalty high into the top corner of the net leaving Jak Alnwick helpless.

Eight minutes later Slivka cushioned a long Lewis Stevenson’s cross into the path of Scott Allan, who bundled the ball past Jak Alnwick from close range.

Easter Road erupted moments later then Jamie MacLaren headed another superb Stevenson cross into the net and the home fans started to believe that the impossible six goal victory which would have seen Hibs overtake Rangers into third place could happen.

Hibs continued to press forward and Alnwick did well to save a header from Steven Whittaker as Lennon’s men looked to make it 4-0.

Jamie Murphy then send an inch perfect through ball which Jordan Rossiter drilled into the bottom corner of the net, effectively ending Hibs’ hopes of achieving the impossible.

Rangers caretaker manager Jimmy Nichol replaced Sean Goss with Bruno Alves to steady the defence however it ws at the other end where the Portuguese international made an immediate impact sending a superb curling free-kick over the wall and into the net to level the scores.

Just before the break Rossiter was booked for scything down Kamberi and Scott Allan was also shown a yellow card for a late challenge on Rossiter.

The visitors started the second half strongly and Cummings set up Holt whose shot was deflected into the net off Efe Ambrose.

In the 68th minute, holt tried a long range effort which appeared to be heading wide until it deflected off Josh Windass leaving Marciano helpless.

Two minutes later MacLaren grabbed his second goal of the game after good work from John McGinn and Slivka.

McGeouch almost made it 5-5 with a powerful strike but Alnwick produced a fantastic save to deny the midfielder.

In time added on Barker skipped past Tavernier and fired a low cross which rebounded off Bates and Maclaren flicked the ball high into the net sparking mayhem inside the stadium.

Lennon ran onto the pitch with his arms outstretched mimicking either Henrik Larsen or an airplane and was sent off for his celebration.

Rangers had a final chance in the dying second when they were awarded a free-kick 25 out but Alves’ strike hit the wall and was cleared.

After the final whistle, the fans stayed behind to show their appreciation to the Hibs players for a fantastic season.