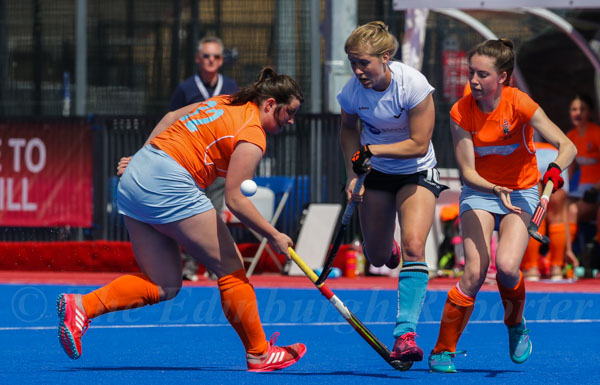 Team of the day, Braxgata, score four in first quarter against Western The opening match on Day 2 of the EuroHockey Club Challenge at Peffermill was between Italy’s Pisa and Lithuania’s Gintra. The first half was split fairly evenly, with both teams making ground into opposition territory, but neither could find the net and so the half finished 0-0.

However, early in the second half Gintra scored two goals in quick succession to go 2-0 up, before sealing the match with a third in the final quarter. The match was notable for the number of cards awarded from one particular umpire, but one or two may have been a touch dubious. Next match up involved Clydesdale Western from Glasgow and Braxgata from Belgium.

Both sides looked evenly matched on paper, but by six minutes of the first quarter, Braxgata were 3-0 ahead from three superb goals from open play. Western had barely touched the ball and were looking to be struggling. A fourth from the Belgians just before the end of the quarter, effectively, ended the match.

Western came back into the match in the second quarter, pressurising the Braxgata defence, but couldn’t get the ball over the line.

The second half saw no more goals, but it wasn’t for lack of effort on the Belgian side’s part, exerting geat pressure on the Western defence. Western had a few breaks upfield, but in the end, were never really at this particular race. Second last match was played between Russia’s Metrostroy and Swiss side, Rotweiss Wettingen. This really was an end to end affair, both sides gaining and losing territory and possession at a equal rate. However, despite several penalty corners both ways, neither team could find the back of the net. In the latter stages, Metrostroy had the better of the chances, but, less than two minutes from time Wettingen turned a drive upfield into a win via a ball into the area, which struck the post and was then pounced on as the defence looked on and netted for their one-goal win. Edinburgh University and Swansea City then played the final match on Day 2 with Swansea really needing the points from a win due to their drawn match the previous day.

This one was the end-to-ender the fairly large crowd had turned out to see, with both sides creating and destroying attacking chances, but it wasn’t until near the end of the first half that the deadlock was broken as Edinburgh scored from open play for a 1-0 lead. A lead they held for just about a minute as Swansea broke from the restart and scored an equaliser on the cusp of half time.

The second half was probably more Edinburgh’s but Swansea had their chances as well. However, neither side could add to their tally and the match finished 1-1.