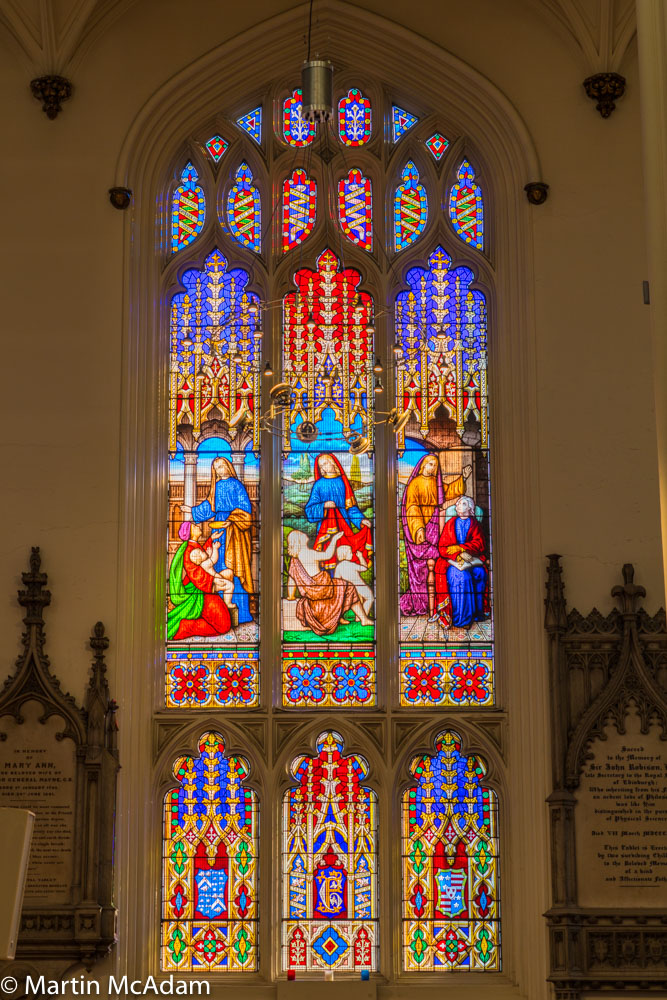 St John’s Church on the corner of Lothian Road and Princes Street is a bit of an undiscovered gem.

This Episcopal church has the most beautiful ceilings, and is a rich example of the architecture that we are so used to in Edinburgh.

St John’s celebrates 200 years since it was first consecrated on 18 March 1818. Information about this year’s events are on Facebook and on Twitter with the hashtag #StJohns200. Matins will be recreated on 6 May 2018 as it was celebrated when the church was first built.

Sadly as is the way of many developments even now, it meant the felling of trees.

In Memorials of His Time Henry Cockburn wrote that ‘one lamentable error’ continues to be committed : “A group was felled about the year 1826 which stood to the west of St. John’s Chapel, on the opposite side of the Lothian Road, and formed a beautiful termination of all the streets which join near that point.

“One half of the trees, at the least, might have been spared, not only without injuring, but with the effect of greatly adorning, the buildings for which they have been sacrificed. Moray Place, in the same way, might have been richly decorated with old and respectable trees. But they were all murdered, on the usual pretence of adjusting levels and removing obstructions.” Dr Eleanor Harris who researched The Episcopal Congregation of Charlotte Chapel, Edinburgh 1794-1818 told us : “I should explain that it wasn’t St John’s that resulted in the felling of trees, which took place nearly 10 years later and on the other side of the West End.

“When St John’s was built, the West End must have been a lovely leafy corner on the edge of the city. Henry Cockburn also famously writes about listening to corncrakes at the corner of Charlotte Square, until Moray Place was built in 1822.

“Development arrived bit by bit – Moray Place took the corncrakes in 1822, the canal arrived around the same time and Lothian Road was filled up with coal yards, timber yards, offices etc. The trees were felled in 1826, then the railway arrived in the 1840s and suddenly the semi-rural regency church was in the middle of a bustling, industrialising Victorian city (and became rapidly smoke-blackened – I remember it being cleaned again in the 1990s) St John’s is modern gothic revival. It was in the forefront of a revival of interest in all things gothic and it’s no coincidence it was built the same year Frankenstein was written!

“St John’s in 1818 must have felt a very creative place. It was a new church for a new town – the whole area had been fields not long before, and the gentry, solicitors, bankers, solidiers, grocers, hairdressers, servants and labourers who mingled in its aisles had all moved here recently from other parts of Edinburgh, Scotland, around Britain, and from around the world.

“It was one of the first gothic revival buildings every to be built in Edinburgh, the first of the ‘dreaming spires’ to adorn the classical and rather austere city, and it must have been a sensation when it was built.

“I became interested in St John’s history because I have sung in the choir there for many years. The choir was also founded in 1818 on the opening of the church, as part of a programme of changes to worship to make it a more participatory and sensory experience than the congregation had experienced in its former chapel in Rose Street. “Back then, there was very little church musical tradition in Edinburgh, and the choir was notoriously bad, but successive rectors and vestries persisted in encouraging the music, and eventually it achieved a respectable standard. The choir sings new music almost every week and with several composers amongst its members.

“I like to think that we are keeping alive the creative engagement between ancient tradition and contemporary development, which inspired the church’s foundation.”