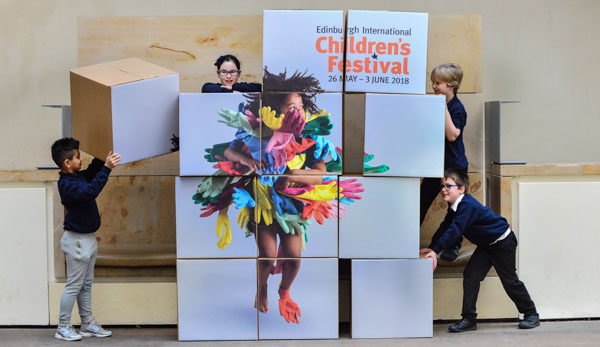 Produced by Imaginate and funded by Creative Scotland, the 29th Edinburgh International Children’s Festival (26 May – 3 June), launched its 2018 programme to the public today. From intimate, immersive theatre specifically designed for babies, through to high-energy and thought-provoking shows for teenagers, the Festival presents the gold standard of theatre for young audiences from around the world.

This year’s programme features 14 shows from 12 countries, giving a varied programme of theatre, dance, multi-media and puppetry curated by Festival Director Noel Jordan. In addition to well-loved Scottish companies such as Catherine Wheels, families will have the opportunity to see productions from as far as New Zealand and Canada, and for the first time, an exciting show from South Africa partly performed in the clicking language Xhosa.

This year, the festival has also extended opportunities for families to attend shows with performances in the evening, at the weekend and on Friday afternoon.

“2018 promises to be another spectacular year for the Festival,” said Edinburgh International Children’s Festival’s director Noel Jordan. “Where else can you share the lives of two young refugees from Syria, thrill to the rebellious curiosity of a boy made entirely of clay or delight in watching childhood toys infiltrate and disturb the lives of busy executives. Whilst the stories they create are incredibly unique and offer different perspectives of the world, at their core is a belief that children – no matter what their circumstances may be – deserve the best art possible.” This year’s festival doesn’t shy away from difficult topics. From the refugee crisis in Europe (We Come from Far, Far Away), to four young girls’ obsession with death (Mbuzeni), from climate change (Loo) to overcoming grief (Eddie & the Slumber Sisters), this carefully curated programme tackles big issues with sensitivity and humour, giving children and their families plenty of food for thought.

The festival will open with a family weekend at the National Museum of Scotland (thanks to an enduring partnership with National Museums Scotland) with free drop-in events throughout the building including live music, pop-up performances, storytelling, hands-on arts activities and more. As part of the celebration of the Year of Young People, Imaginate has recruited six passionate and enthusiastic Young Associates aged between 17-24 yrs to help programme and deliver the weekend festivities. They have been given free rein to curate a key strand of the weekend.

The festival will also go beyond Edinburgh with a 3 week tour of Scotland of Baba Yaga, Imaginate’s new international co-production with Shona Reppe and Windmill Theatre Co (Australia) funded by the Scottish Government’s Edinburgh Festivals Expo Fund. A new twist on an old Russian folktale created by three unique female artists from across the globe, the show is set in a “retro-futuristic world” where Vaselina must achieve three impossible tasks to escape from the witch Baba Yaga.

“I recognise the importance of young people engaging with the arts and the significant benefits gained by increasing access and opportunities for all our young people particularly this year, as we celebrate the Year of Young People. The 2018 festival will deliver a high-quality programme of work in Edinburgh and beyond including Baba Yaga, which was funded through £100,000 provided by the Scottish Government EXPO fund. Research has provided strong evidence on the value of young people experiencing culture from an early age, and the Children’s Festival ensures their exposure to performances and experiences of world class quality.” The festival will also see the culmination of a special initiative, which gave a group of 10-15-year-old children from Craigmillar the opportunity to work with the festival director. Together, they attended nine productions at the 2017 Edinburgh Festival Fringe and following heated discussions about what they had seen and liked, selected The Road That Wasn’t There to be included in the 2018 Children’s Festival programme. The project was funded by The City of Edinburgh Council.

Megan, one of the young person involved this year said: “I found it good to hear the feedback of different people and what they thought of each show, but it was kind of hard to put across what I thought and explain why I wanted it included in the programme”.

· 14 productions from 12 different countries, including for the first time, South Africa

Festival tickets are on sale now. For full programme and booking information, go to http://www.imaginate.org.uk/festival. Tickets can be booked online or at 0131 228 1404.