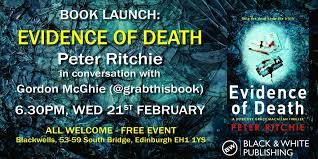 Fans of Peter Ritchie’s crime novels are in for a treat this week with the latest in the Grace Macallan series, ‘Evidence of Death’ out tonight.

Billy Nelson is back home in battle-scarred Belfast. But the Troubles have cut this ex-Army Loyalist hard man deep – and now that his city’s allegiances have shifted, nothing is quite the same.

An outbreak of gang violence forces Billy to move on. This time to Edinburgh, where he muscles in on the capital’s drug trade and the family who run it. As the balance of power tips, underworld rivalries between Edinburgh, Glasgow and Belfast spill out onto the streets.

With a spate of horrific incidents and a trail of victims, the pressure is mounting for Grace Macallan, new superintendent of the Crime & Counter Terrorism Directorate. Troubled by her own demons and with everyone baying for the blood of Billy Nelson and his old paramilitary contacts, can Grace hold her nerve?

Peter began his working life at 15 as a deep sea fisherman before joining the police service and moving through the ranks of CID/Murder Squad/Regional Crime Squad in Scotland.

He then went on to manage the Organised Crime Unit in the National Criminal Intelligence Service in London where he ran a multi-agency team drawn from various branches of the law enforcement and the security services. This was a unique concept at the time and Peter travelled to many parts of the world in this role. He was subsequently appointed as the UK Liaison Officer to Europol in The Hague where he spent five years.

He returned to Lothian & Borders heading the Major Crime Team before taking on an advisory role for a project in Croatia.

Following his retiral he worked on a number of private investigations before spending the next few years as part of the public inquiry team looking into the murder of the LVF leader Billy Wright in the Maze Prison.

He also worked on a public inquiry into the death of eighteen patients in the Vale of Leven Hospital from a hospital acquired infection.