We indulged ourselves in the most quintessential of English customs, afternoon tea. It appears to be fashionable again and many establishments in and around Scotland’s Capital city are heavily prompting options.

However, the custom of drinking tea actually dates back to the third millennium BC in China.

It was popularised in England during the 1660s by King Charles but afternoon tea was really introduced in England by Anna, the seventh Duchess of Bedford, around the 1840s.

She had a habit of becoming peckish in mid-afternoon and dinner didn’t arrive in her house until eight.

So, the Duchess apparently ordered tea, bread and butter and cake be brought to her room.

London’s finest hotels Claridges, The Dorchester, The Ritz and The Savoy along with Harrod’s and Fortnum and Mason are famed for their teas.

The event is also well-known in other parts of Britain and regularly convenes in Dorset, Cornwall and Somerset and The Gleneagles Hotel claims to provide Scotland’s finest afternoon tea.

Traditionally, the package consists of dainty sandwiches, scones served with clotted cream and preserves plus cakes and pastries.

However, we found that Kyloe provides something different, giving a meaty twist on tradition.

The selection of fine delights first. Carrot and pecan muffin was packed with spices and topped with a soft, cream cheese sauce which was not as compelling on its own but, together with the muffin mix, it was indulgent delight.

I’m not a fan of contemporary, mass produced doughnuts from major chains – no names – but this lemoncurd version was surprisingly light and the tangy, citrus inside was an ideal foil to the dough.

The fudgy oreo brownies had bags of flavour but were, after a few bites, heavy but the freshly-baked scones – crispy on the outside and soft inside – had a fine texture and taste.

The seasonal jam, however, for me lacked real flavour, disappointingly, and we sidestepped the clotted cream.

There were five assorted savouries, four of them hot. The pick of the bunch was Bee’s Dad’s beef focaccia with pickle, onions and curry spices.

This scored heavily as the flavours complement rather than compete with each other and the beef was beautifully cooked with a hint of moisture.

The pear, apple and cheddar sandwich on walnut and honey bread stacked up, once again the flavours merging. The bread could be a tooth buster, however.

Mini lamb burgers were packed with flavour and came with a mango chutney and rocket on a neat bun.

The chicken pie with lime and chilli looked superb but was, however, disappointing. A small piece of chicken was wrapped in chewy pastry and I felt that pickled mackerel on crispy pumpernickel was way out of line with the rest of the offering.

Presentation was first class. You eat with your eyes and the selection arrived in a wooden basket, mirroring the wood panel on the roof of the well-appointed restaurant at the West End of Princes Street.

We declined the champagne and homed in on the organic and ethically-sourced teas. They promised to deliver an outstanding cuppa every time.

Pam plumped for English Breakfast, a classic with a blend of assam and nilgiri leafs.

My pick was pure Himalayan darjeeling, a black tea with a sweet muscatel taste. After a five-minute brewing time it proved an ideal accompanying to the meal, although don’t leave it too long as it became bitter.

I was tempted to try Bird of Paradise, a blend of white and green tea with apple and pear flavours. This was too sweet for my palate and did not work so well with the food but others may differ.

The experience, and it is an experience, starts with a seasonal milkshake in a dainty, wee milk-style bottle with a straw.

We were offered banana and Nutella, a brand of sweetened hazelnut cocoa spread manufactured by the Italian company Ferrero that was first introduced in 1965.

We had not tasted Nutella before, but this milkshake was both interesting and refreshing. I’ll now try to replicate it at home, it was that good.

We were also offered sorbet between the savouries and the fine delights, a palate cleanser and an innovative idea.
I plumped for figs. Not the best choice in hindsight as I became bored after two spoons.

Pam picked blackberry and the subtle taste was a highlight of the afternoon.

Kyloe is comfortable. You can chill and our window seat allowed us to watch the world go by.

The music proved an ideal background and Claire our waitress was bubbly and knowledgeable, talking us through the process.

A word of caution. Women guests not used to Kyloe will have to get their head around meeting a man in the toilet, but the booths are clearly marked.

Kyloe ticks many boxes. It is spotless and the service slick so five-stars for this £25 offering. 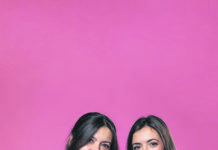 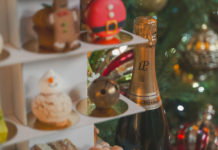 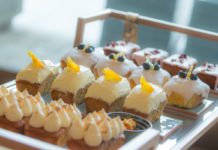 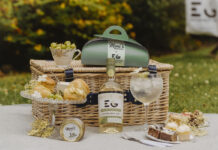 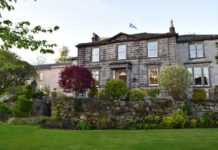 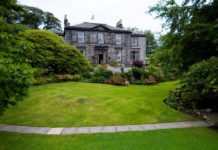 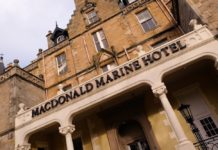 Have a festive afternoon tea at Macdonald Marine Hotel

Kyloe – satisfaction on a plate with a sensational view

Where to eat in Edinburgh – Afternoon Tea at Tigerlily