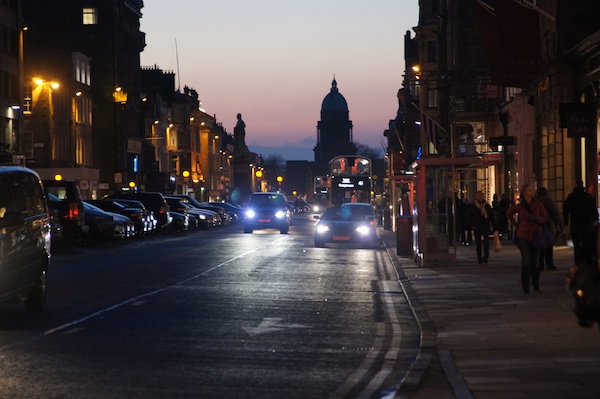 Home News Time to turn to George Street – drop in event tomorrow
Share
Facebook
Twitter
Pinterest
WhatsApp
Print
Residents, businesses and other interested parties are being given the opportunity to help shape the future design for George Street and the surrounding area at a drop in event tomorrow.
Design consultants WYG Environment Planning Transport Ltd, in collaboration with LDA Design, are holding the first in a series of public drop-in event tomorrow Tuesday 16 January 2018 to learn more about the needs and views of individuals, community groups and stakeholders. Participants will help shape clear design objectives for the ‘First New Town’, which encompasses George Street, Castle Street, Frederick Street and Hanover Street. Objectives will build on stakeholder engagement and a set of design principles adopted by the Council last year following a year-long trial to increase pedestrian and cyclist provision on George Street.
The output from these events, against which future designs for the First New Town will be developed, will also feed into the Council’s wider context of the Central Edinburgh Transformation project.

Transport Convener, Councillor Lesley Macinnes, said: “George Street, as part of the First New Town, is one of Edinburgh’s key thoroughfares and is  central to the way our city centre operates. That’s why it’s essential that we involve as many people, organisations and businesses as possible in the discussion about its future.

“Throughout the initial George Street trial we worked with the public to explore needs and desires for the street. We want to reflect this approach with the broader, longer term Central Edinburgh Transformation, creating an overarching plan for a more welcoming, accessible city centre.”
In 2014 there was a temporary scheme to transform George Street which the council says enabled them to closely examine  its use alongside regular engagement with stakeholders. The results of the study helped them and their advisers in creating detailed design principles to guide its future development.
WYG Environment Planning Transport Ltd and LDA Design were appointed by the Council in October to draw up a long-term vision for the historic First New Town streets.
Once developed, the new, preliminary design will take into account George Street’s interdependence with intersecting ‘First New Town’ streets Castle Street, Frederick Street and Hanover Street, as well as Charlotte and St Andrew Squares.
January’s drop-in events are open to all members of the public and will be held on Tuesday 16 January from 3pm-8pm  at The City Art Centre, 2 Market Street, Edinburgh, EH1 1DE.