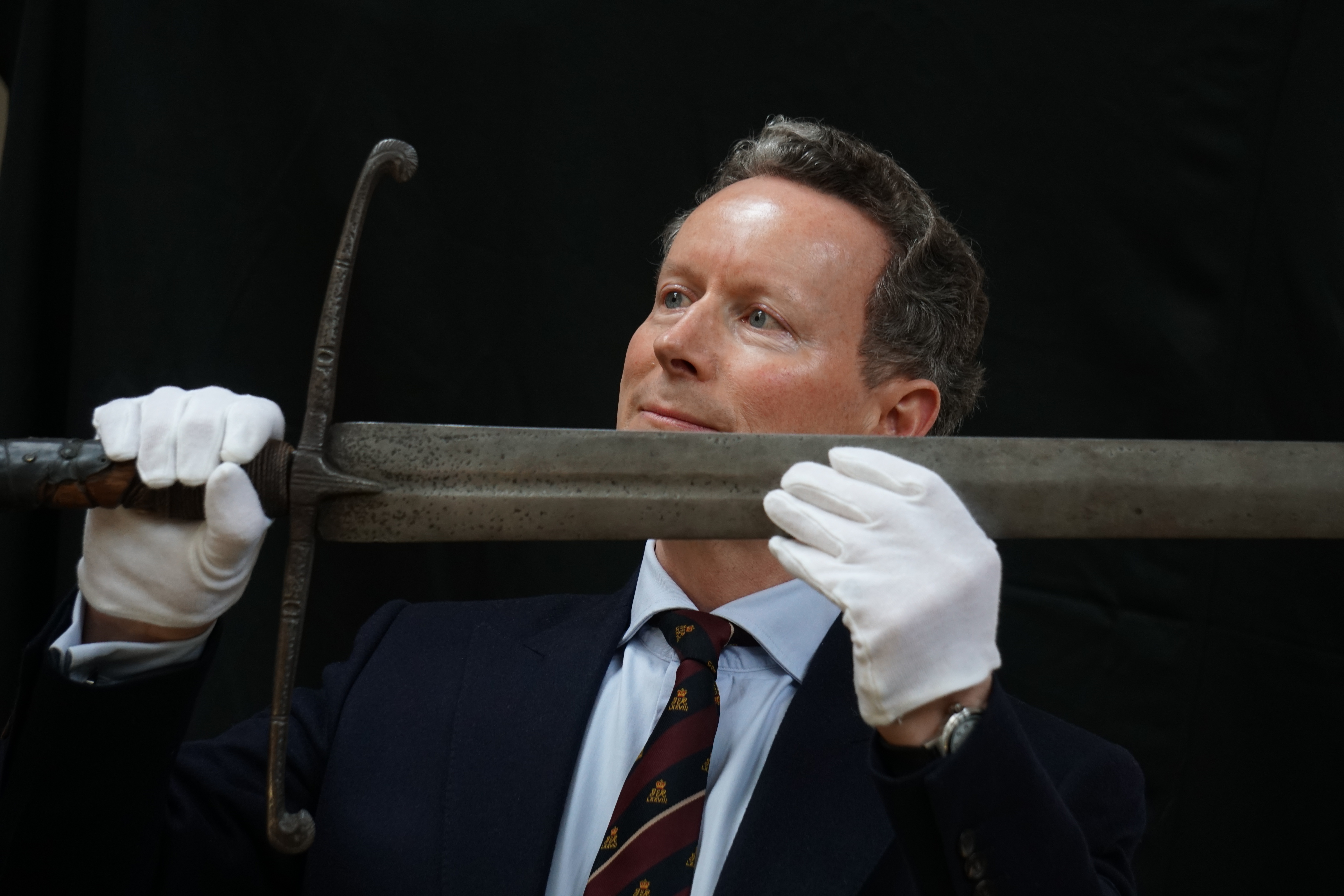 Bonhams the auction house on Queen Street has a fabulous display of treasures for you to see when you visit next week. These are all from Broomhall House, the home of the Bruce family for 300 years, and they include a mighty sword which was once owned by Robert the Bruce.

Lord Charles Bruce is seen below with the 14th century Sword of State (but please don’t think he was holding it on his own – there were two strong men, one at either end!) Other items, which are loaned for display purposes only by the Bruce family, include a suit in the Bruce tartan from the 18th century which was commissioned by James Bruce of Kinnaird. This was only possible after repeal of legislation prohibiting the wearing of tartan. The suit is woven from linen and silk weave. Lord Bruce explained to The Edinburgh Reporter that the tartan is in good condition as it has been kept out of the daylight and away from moths, and it appeared to have  been an inspiration for fashion designer Vivienne Westwood at one time.

He said “Vivienne Westwood chose this tartan and that is why it became so popularised at that time.She had a shop in Mayfair and I used to pass it when I worked nearby in the 1980s. Suddenly her shop was festooned with Bruce tartan. In this suit some colours like turquoise were introduced for the first time in Scotland.”

Broomhall House is not open to the public, but it is now open for events both corporate and private. You may find more details here.

Speaking with Lord Bruce about the treasures from Broomhall from Phyllis Stephen on Vimeo. There is also a painting by Allan Ramsay of a different Charles Bruce, the 5th Earl of Elgin. The Earl was a founding member of the Royal and Ancient old Club of St Andrews.

The specialists at Bonhams are eagerly awaiting visits from members of the public bringing in items for sale at the next Scottish Sale in April.

The exhibition and valuations are free, but members of the public are invited to make donations to the Kolkata Scottish Heritage Trust which is restoring the Scottish Cemetery in Kolkota.

Charles Graham-Campbell the Managing Director of Bonhams in Scotland said : “It’s a pleasure and a privilege to be hosting these treasures from Broomhall House belonging to the Bruce Family. This is a great opportunity for people to see important and wonderful artefacts from our nation’s history that are rarely on public display.”