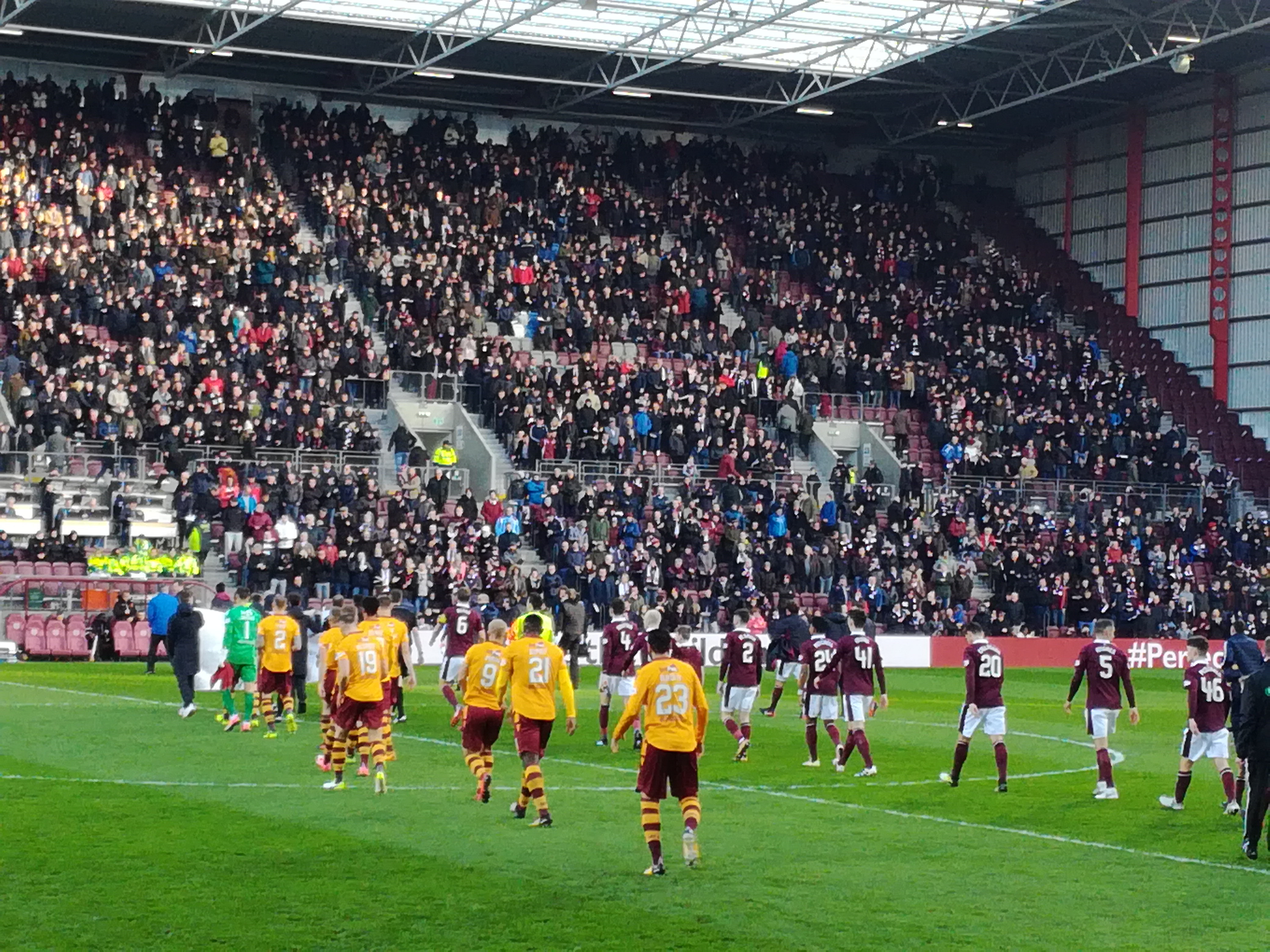 Hearts extended their unbeaten run to 12 games with a 1-1 draw against Motherwell in the Ladbrokes Premiership at Tynecastle Park on Saturday.

However, a 95th minute equaliser from Motherwell’s Curtis Main not only denied the Maroons all three points but also denied them extending their run of games without conceding a goal to nine games. It was doubly frustrating as many of the Hearts players, including goalkeeper Jon McLaughlin, believed the ball had not crossed the line for Well’s equaliser.

Hearts Head Coach Craig Levein had expressed concern about the number of games in quick succession following the winter break – Saturday’s game against Motherwell was Hearts third in six days – and he made four changes to the team that won in Hamilton on Wednesday evening. Aaron Hughes, Michael Smith, Arnaud Djoum and Anthony McDonald returned to the starting eleven replacing Connor Randall, Don Cowie, Lewis Moore and Harry Cochrane whom the Head Coach said had ‘ran out of gas’ at Hamilton and was taken off at half-time.

It was Foundation of Hearts day at Tynecastle and there was a cracking atmosphere as the game kicked off on a blustery day in Edinburgh.

Ten minutes in and Hearts created the game’s first real chance when 17-year-old Andy Irving’s cross was deflected by Dunne towards his own goal, but the ball bounced off the post.

A fine run from Demetri Mitchell saw the on-loan Manchester United defender pass to Ross Callachan who set up Anthony McDonald. The 16-year-old evaded a late challenge and fired in an effort on goal, but the ball sailed into the Roseburn Stand.

The referee was Willie Collum, therefore it was inevitable there would be controversy at some point. The first contentious incident came midway through the first half. Anthony McDonald’s cross was headed on by Ross Callachan and hit the arm of Motherwell’s Kipre. Penalty shouted the Hearts players and supporters. Mr Collum didn’t want to know.

Steven Naismith then tried a long-range effort which was direct at keeper Carson.

In the 29th minute the visitors thought they had ended Hearts long run without conceding a goal when Aldred’s shot on goal was turned in by Main but referee Collum ruled it was offside.

The afternoon’s second controversial incident came when Ross Callachan drove into the Motherwell penalty box only to be tripped by Aldred. Penalty this time, bawled the home support. Mr Collum merely shook his head.

Motherwell had a chance five minutes from the break when Main got on the end of Ciftci’s cross, but his header went wide.

Hearts almost grabbed the lead on half-time when the impressive Demetri Mitchell raced into the Motherwell penalty box and fired in an effort which smacked off the post to the agony of the home support.

Hearts started the second period on the offensive and young McDonald forced Carson into a fine save early in the second half.

Moments later, Steven Naismith set up Mitchell but his fierce strike on goal from 20 yards flew inches over the crossbar and into the Gorgie Stand.

Craig Levein brought on new boy Danny Amankwaa with just over 20 minutes left in an attempt to make the breakthrough.

Main had a chance to open the scoring for the visitors with 15 minutes to go but his shot went wide, and Hearts heaved a sigh of relief.

With ten minutes left, Hearts took the lead. A free-kick was delivered by Andy Irving and fell at the feet of substitute David Milinkovic who fired the ball past keeper Carson to the delight of the Maroon Army.

Connor Randall was next to try his luck for the home side with a long-range effort which went just wide as Hearts looked for the crucial second goal. It nearly came from that man Mitchell who saw another effort go just over the crossbar.

The fourth official indicated there would be five minutes additional time. In the fifth minute of this, the inevitable happened.

David Milinkovic collected the ball on the edge of the Motherwell penalty box but instead of running down the clock, the winger’s pass was cleared by the visitors who broke forward. Arnaud Djoum then gave away a needless free-kick on the edge of the Hearts penalty box. From the delivery there was an almighty scramble inside the Hearts area where Well’s Main got the final touch to stab the ball over the line for the Steelmen’s equaliser, despite fierce protests from Hearts Jon McLaughlin, in particular, that the ball had not crossed the line. But referee Collum awarded the goal and Hearts threw away two points – and 13 hours and 50 minutes without Hearts conceding a goal had come to an end.

“Today was disappointing. For the life of me I don’t know how we didn’t get two penalties in the first half.

“I’ve seen both situations on video and both are blatant penalties. So, I’m disappointed for the players considering the effort they’ve put in after two particularly hard games recently.

“And to be in front going into the 5th minute of injury time only to lose a goal was extremely disappointing.

“I’m also disappointed that we invited the late pressure by giving two free-kicks away in the last three minutes. That invited six or seven of their players into our box and I’m disappointed with that.

“I feel we merited to be in front at half-time, we hit the post twice as well. The supporters were good today and backed us despite us not taking advantage of the chances. So yes, I think disappointed sums up my emotions today.”

Hearts now must lick their wounds ahead of Tuesday’s visit to Celtic Park.