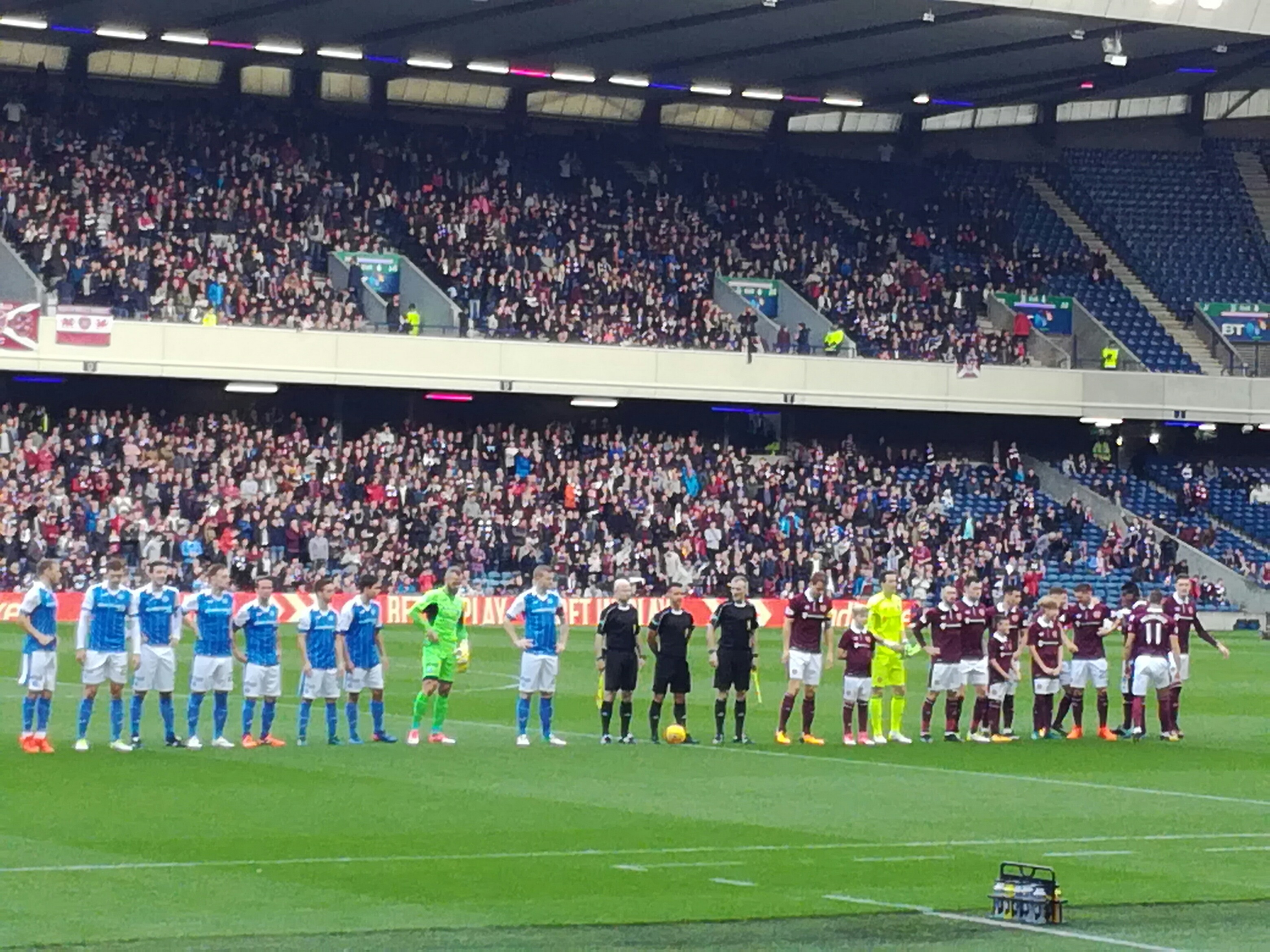 For only the second time this season Hearts played a Ladbrokes Premiership game in Edinburgh when St Johnstone were the visitors to BT Murrayfield on Saturday afternoon. More than 18,000 fans headed to Hearts temporary home but, it must be said, the game was not a thing of beauty. The only positive things which could be said of the afternoon were Hearts won and there were encouraging displays from three graduates of Hearts youth academy. Oh, and Hearts leaped above Hibernian in the league table…

Head Coach Craig Levein was forced into three changes from the team that defeated Ross County seven days ago; the injured Don Cowie and suspended Connor Randall missed out while 16-year-old Harry Cochrane was left on the substitutes’ bench. Replacing them were Ross Callachan and Jamie Brandon while there was a starting place, at last, for David Milinkovic.

It was Milinkovic who made a bright start, his trickery on the wing looking like it could cause a few problems for the Perth Saints but the French born attacker seemed to fade as the first half wore on. However, he wasn’t the only Hearts player to be guilty of this as a poor opening period took on the same attraction as watching the paint dry on the new Tynecastle main stand.

Kyle Lafferty had, arguably, the game’s first decent chance in the 15th minute but headed John Souttar’s corner wide. Lafferty appeared to be playing a tad deeper than normal with Milinkovic and Isma Goncalves spearheading Hearts attacks. If this was puzzling so too was the sight of defender Souttar taking corner kicks. With St Johnstone liable to counter-attack one wondered about the wisdom of having the former Dundee United player out of position.

Hearts were resorting to too many long hopeful punts forward, some of which were aimed at Goncalves, others apparently with a view to getting the crowd more involved given the number of clearances that sailed out of play.

Jamie Walker had a shot which was deflected wide while Christophe Berra’s header was pushed away by Saints keeper Mannus.

St Johnstone were dangerous on the break with O’Halloran proving dangerous. But, if truth be told – and it always is in The Edinburgh Reporter – it was an awful first half and one most of us were glad to see the back of.

We pushed out levels of optimism on the premise the second half couldn’t be any worse. There was hope when Craig Levein opted to leave Prince Buaben in the dressing room at half-time – he was surely more use off the pitch than on it – and replaced him with Harry Cochrane.

David Milinkovic did appear to have been pepped up by his half-time orange and he started the second period the way he began the first.

The game did liven up slightly and fine play from Jamie Walker, racing through the visitors’ defence, set up Goncalves but the former St Mirren’s shot on goal was poor and did little to trouble keeper Mannus.

Just when it began to look like Hearts second game at BT Murrayfield this season would end the same way as the first – goalless – the Maroons took the lead with just 15 minutes left. Determined play by another young Hearts substitute Euan Henderson saw Cochrane try for goal. His effort was intercepted by Kyle Lafferty who spun and shot for goal. His shot took a deflection and trundled past Mannus and into the net. It was a goal rather in keeping with the afternoon.

With Saints pushing for an equaliser, Hearts managed to hang on. Indeed, young Cochrane almost added a second with the last kick of the game but his shot hit the post.

The game ended with Hearts first home victory in the Ladbrokes Premiership this season which meant the Maroons jumped above St Johnstone and Hibernian in the league table.

Hearts youngsters Jamie Brandon, Harry Cochrane and Euan Henderson all impressed and it’s good to see Hearts giving youth a chance again, something the Gorgie club has a notable reputation for.

Craig Levein was content with the result, if not the performance. He told the official Hearts website after the game:

“It wasn’t a great match, was it? It was a war of attrition. Previous seasons would have seen us lose similar matches, but today we dug out the win.

“I thought our forward play wasn’t great, we got confused at times about whether to go long or come short, and chose the wrong option, but we need to continue to be dogged.

“If you’re difficult to beat in matches, sometimes you get that bit of luck that wins you the game, like it did today.”

“I was really chuffed with the kids,” Levein went on. “Jamie Brandon had a slow start, but after 15 minutes he started getting really tight to Scougall and he caused no problems after that.

“Henderson did a good job too, he chased things into corners, pressured them into mistakes and kept the ball to bring others into the game, while Harry was just really good.”

Top man: Jamie Brandon – booked early on but the young defender looked more assured as the game went on.