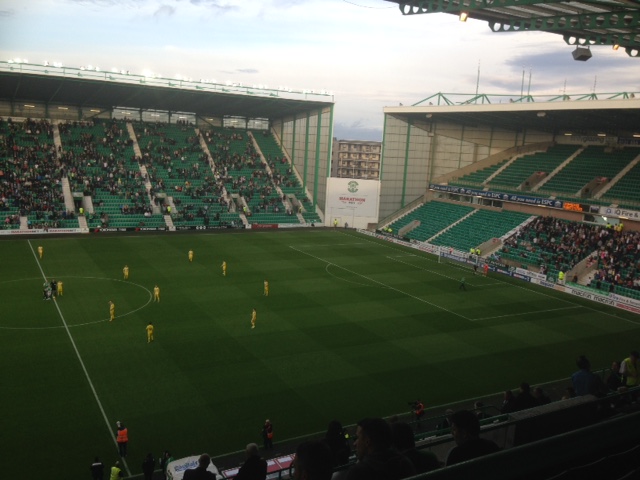 Hibs cruised into the last eight of the Betfred League Cup with an emphatic 5-0 win over high flying Ayr United at Easter Road this evening.

Head Coach Neil Lennon made four changes to the starting XI that defeated Partick Thistle on Saturday and also changed the formation from a 3-5-2 to a 4-4-2.

Steven Whittaker and Martin Boyle dropped to the bench whilst Paul Hanlon and Marvin Bartley were rested.

On the half hour mark, Stokes turned provider when he produced a sensational reverse through ball into the path of Simon Murray who slotted home his ninth goal of the season.

Hibs continued to press but were unable to add to their lead before the break.

The hosts ensured qualification in the 58th minute when John McGinn found Murray on the left wing. The striker ran at the Ayr defence before curling an inch perfect cross to the back post for Stokes to tap in.

Murray and Swanson were then replaced by Martin Boyle and Vykintas Slivka then eight minutes later Hibs added a fourth when Porteous headed down a McGinn corner into the path of Efe Ambrose who fired the ball into the net form close range.

Deivydas Matulevicius replaced Dylan McGeouch and he marked his debut with a goal with six minutes remaining. McGinn’s corner was cleared into the path of Ambrose who fired the ball into the box and after several rebounds it landed at the feet of the Lithuanian who hammered the ball past Jordan Hart to complete the scoring.

After the game a delighted Lennon said: “I’m delighted with the goals and the quality as well but we are in the quarter final and that’s the main thing. Stokes showed some great touches tonight and in addition to his two goals his play in general was quality.”

The draw for the quarter finals will be made tomorrow.