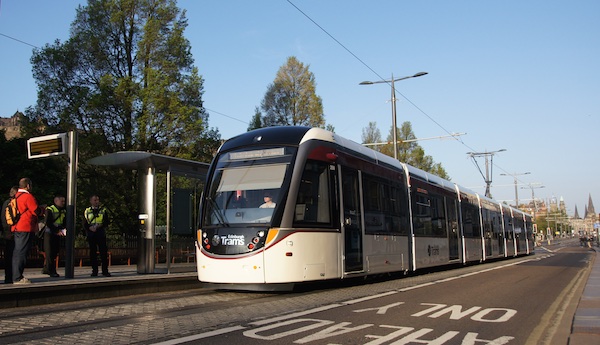 We posed some questions to the Council Leader Adam McVey following the announcement that the Outline Business Case has now been developed for approval by the council next month. This means that the tram will, if agreed by the councillors, extend to Newhaven by 2022.

The Council Leader @adamrmcvey explains the process for taking the tram down to Newhaven pic.twitter.com/vLaZud6f5Q

The cost will be £165.2 million. So our first question was this:

TER : HOW WILL IT BE PAID FOR?

Councillor McVey : “Essentially the test we set out as the SNP Group at the recent council elections and other parties did also was to make sure that if we progressed with tram extension it does not put the council under any additional financial pressure.

“We’re developing a business case that relies on a contribution from our other transport company Lothian Buses, and also makes sure that the revenue from the patronage from people using the tram is enough to sustain the borrowing that we will need to carry out the extension. Councillor McVey : Leith is the most densely populated area in the whole of Scotland. There’s a huge number of people who need to get around the city.

“I think the thing the tram is good at is high capacity public transport. That is what it is. It is for 9 o’clock in the morning and five o’clock at night when it is trying to move vast numbers of people around our city.

“Delivering it to the highest densely populated area in Scotland will create a ready-made customer base for tram.

“If you look at the business assumptions that were made in the first case, in the revised business case which ended the current line at York Place, we are not only hitting those expectations but we are beating them.

“We’ve made sure that the process that we’ve continued with is a conservative one. We are hoping that these estimates to go forward, and this is what our business case is based on, are not ambitious one that will leave the city having to pay a deficit.

TER : Why is it going to take so long to complete this line?

“We are being cautious and conservative in our approach and that is what I think the people of Edinburgh expect. We got into a massive ‘fuddle’ in this city over the first incarnation of the tram. We weren’t prepared.

“We did not spend enough time planning. We spent more time on site. We are trying to make sure we spend the planning time that we have correctly that we make that as long as, frankly, it needs to be.

“If it needs to be longer then we’ll postpone it and make it longer because the important thing is when we are on site when we put that first shovel in the ground and start creating disruption for people, that that is the time we are really interested in making sure that the disruption is kept to an absolute minimum.”

TER: Are we definitely going to get an extension to the tram line?

Councillor McVey : No. Right now councillors from all parties are going through the business case page by page, number by number, line by line.

“We won’t progress with the tram extension if we don’t think that this business case is as robust as it needs to be.”

“The people of Edinburgh deserve us to behave in that way. I think even if we go forward from now all we will be doing is putting out a tender and asking companies that can come and build us an extension to come and bid for that extension work.

“Again there will be another decision that we need to take after that process is concluded to make sure that the assumptions we have in the business case over cost, disruption, over a whole host of elements of this project, are holding true, or as my eternal optimist is always hoping that things are better than we have anticipated in the business case.

“If we can get better than anticipated  and we have made the decision on that basis then at that point in October 2018 we will progress with the tram extension and at that point it will be a definite.”

“We can’t just keep on putting more and more buses on Princes Street. It doesn’t work as a model. We have a hugely successful city. It’s a growing city and we need to cater for that.

“We need to make sure that people who are moving to North Edinburgh, to Leith, to the centre, to the west have an effective and efficient way of getting around.