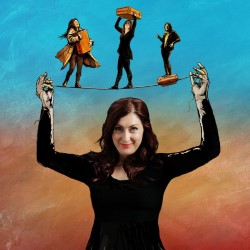 “Mimi’s Suitcase” packs an incredible amount of moods and experiences into one hour as it describes how a party-loving young girl confronts the realities of religious fundamentalism in Iran during the 1980s. Mimi has spent her early teenage years in Barcelona where she revelled in freedom, romance and badly translated songs from “Grease.” Returning to Iran to be re-united with her family, she comes into conflict with the repressive powers of the state and how these powers are used to control women.

“Mimi’s Suitcase” blends the light and dark elements of its tale with force and humour. Ana Bayat is an exuberant performer in constant motion. She switches languages from English to Spanish to Farsi and characters from easy-going Spanish neighbours to sinister religious policemen.

She revels in the pop culture of the 1980s from Duran Duran to Flashdance and her account of how the Ayatollahs stopped the party is funny and disturbing.  The regime’s use of fear, threats and punishments is vividly conveyed as is the arbitrary changing of rules and laws.

In such conditions, the authority of the state provides a motive and excuse to men who enjoy dominating women.  There are however small acts of defiance that provide hope and solidarity for Mimi, her family and friends.  Nevertheless, Mimi has to decide whether to keep pushing against the limitations of her life or seek to escape by cutting loose, footloose.

The show slightly loses focus towards the end with some important questions unanswered, but overall “Mimi’s Suitcase” tells a compelling story with humour, passion and humanity.