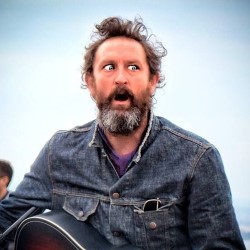 Phil Kay‘s current show is part of Bob Slayer’s Heroes of Fringe and let’s face fact, that’s what Phil is.  In ten minutes, he will show more improvisation, originality and archaic surreal humour than most comedians will perform in a year.  If they’re lucky.  His new show, Phil Kay: Euphoric, does not disappoint and I was left breathless from the laughter he induced. Kay, who created one of my favour Fringe children shows of all time (Gimme Your Left Shoe), is a performer who has some baggage.  Some will tell you that he is mercurial, brilliant at one point and going up his own arse in the next breath.  In all the times I’ve seen him I’ve never left disappointed and Euphoric was no different.  I’ve no idea how much of the show was scripted and you would see on the next performance but you will have fun.

On Friday night he discussed staying in Airbnbs while visiting Australia, the dubious joys of using a dustpan and brush, coincidences, hitching from airports and his recreational pursuits.  He also contended with a heckler, who was either foolhardy, brave or egotistical.  However, instead of attacking them, Kay serenaded the person; that’s not your usual comic’s response to having somebody fact check your material.

If you like your comedians madcap and slightly manic and your humour slightly leftfield, then get yourself along to this show.  Phil Kay will transport you to a place of happiness, before dropping you back at the baggage carousel of life feeling much better for the trip.