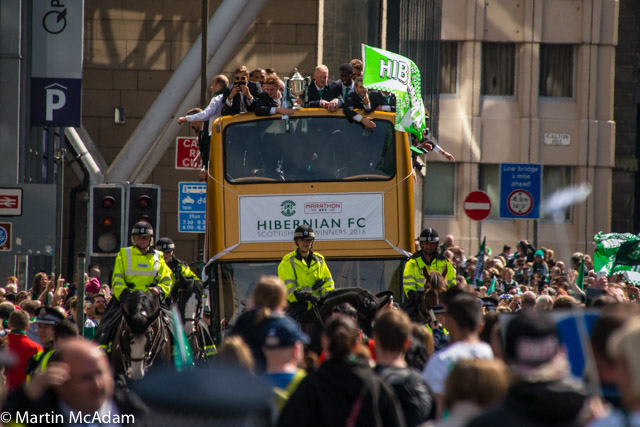 Hibs’ latest signing Anthony Stokes has revealed that Neil Lennon was a big influence in his decision to return for a third spell with the club.

Stokes achieved considerable success under Lennon with Celtic and he believes that he thrives when given the freedom to make his own decisions on the field.

The Republic of Ireland international enjoyed a successful spell at the club under John Hughes which earned him a move to Parkhead then capped off his second spell with a ‘man of the match’ performance against Rangers in Hibs Scottish Cup victory.

The news that he had finally put pen to paper was greeted with universal support from the Hibs’ fans who are already claiming that this year’s transfer window was the best ever.

Stokes told Hibernian Media: “I am delighted to be coming back to Hibernian. I believe that it’s the right decision for me and my football.

I’ve always enjoyed my time here. I know most of the players and the people who work in the background.

“For me to come into an environment where I am happy and comfortable will bring the best out of my football.

“The manager was a big influence as well. I worked with him for five or six years at Celtic. He knows my qualities and he knows how to get the best out of me.

“He gives me the freedom to play and is not on top of me with tactics and I feel like I thrive in those conditions.

“He put forward his plans for this year and he wants to have a real go. I know he is ambitious and he is used to winning things at Celtic throughout his career.

“I want to play for a manager who has that type of ambition and doesn’t like losing games.

“I know plenty of the boys here and I know there is a hunger to win matches and improve and if we are all at it and push in the right direction we can have a very successful season.

“There is a really good squad here and I think I can help to improve the squad.

“The club has a big place in my heart and it’s where I’ve played some of my best football.

“It’s an environment that can get the best out of me and I am looking forward to getting back amongst the squad and scoring goals again.

“The scenes of celebration following the cup win will live long in my memory, and the only disappointment from my last spell was that we didn’t get promotion.

“The boys did brilliantly last season and now I’ll be looking to help us push on back in the Premiership.

“I thought I did very well during my first spell at the club but my second spell, I wasn’t fit coming into it but I capped it off at the end and couldn’t have left on better terms. It was a special, special day in May.

“I’m 29 and at my peak although I haven’t played in a while. I’m coming here on a permanent contract and I am very confident that the fans will see the best of me.”