Justin Sedgmen clinched the Scottish Open for the first time at Armadale in sensational fashion.

The former Edinburgh Monarchs star left racer Erik Riss in his slipstream after trailing the German early in the final.

Aussie-born Sedgmen, who is now with Belle Vue Aces, said: “I knew if I stayed on Erik’s wheel that I had a chance and this is awesome.” 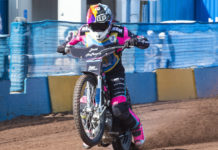