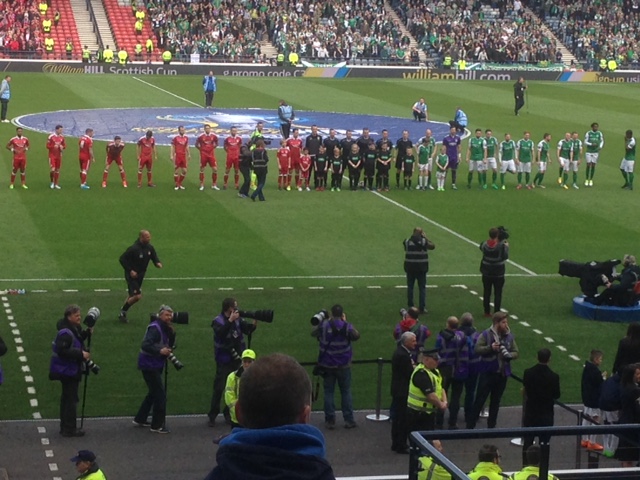 Hibs’ hopes of retaining the William Hill Scottish Cup were dashed following a narrow defeat to high-flying Aberdeen at Hampden Park this afternoon.

After a dreadful start to the game, Hibs fought back from two goals down to equalise only for a cruel deflection to end their dreams.

Neil Lennon made one change to the starting XI that defeated Queen of the South to clinch the Championship title last weekend with Marvin Bartley replacing Andrew Shinnie.

Hibs took almost 20,000 supporters through to the national stadium and they were in fine voice in the pre-match build up outnumbering the Aberdeen fans by almost two to one.

Hibs kicked off but found themselves a goal down after only 12 seconds. John McGinn was dispossessed in the centre circle then Marvin Bartley won the ball and passed to Darren McGregor who tried to find Efe Ambrose but Adam Rooney intercepted the pass and fired the ball low into the bottom corner of the net.

The Dons then dominated possession and added a second in the 24th minute. Fraser Fyvie was booked for a challenge on Kenny McLean then from the resultant free kick Ryan Christie curled the ball into the net at the near post with everyone anticipating a cross ball.

The substitution paid immediate dividends when Martin Boyle beat three defenders and sent a cross to the back post which Holt nodded past Joseph Lewis with his first touch of the game.

Hibs then dominated the remainder of the first half but were unable to grab an equaliser.

Hibs deservedly drew level on the hour mark when Bartley won the ball in midfield and passed to Dylan McGeouch on the half way line. The midfielder surged forward and at the edge of the box played a 0ne-two with Holt, who flicked the ball back into his path and he kept his composure to fire the ball into the net, sparking wild scenes from the large Hibs support.

Both teams had chances but the game was decided by a stroke of luck with four minutes remaining.

Jonny Hayes tried a speculative long range shot which appeared to pose no real threat to Ofir Marciano’s goal until it took a deflection off the unfortunate McGregor and rolled into the corner of the net.

Boyle had a great chance but was denied by some excellent defending then in time added on Marciano came up for a corner which he headed towards goal, but Lewis produced an acrobatic save to ensure Aberdeen progressed to the final.

After the game Lennon told BBC Scotland:  “We needed a 36-year-old (Grant Holt) to come on and get us playing.

“He was brilliant, Holt. We scored two fabulous goals and then we’re in the ascendancy. They got a huge slice of luck with the third goal.

“The first 30 minutes was pathetic and totally unacceptable. It’s nothing to do with tactics or formations, it’s to do with decision making and individual errors.

“We didn’t deserve to lose the game but you can’t give a team like Aberdeen a two-goal head-start.

“Anything can happen once it gets back to 2-2. It just wasn’t our day, but I’m not happy with the way we approached the game.

“All the old habits coming back in, people hiding, not taking responsibility. Gallant losers are losers.”

“Darren (McGregor)  has a lapse in concentration. You can’t concede a goal [Christie’s free-kick] from that angle. Aberdeen haven’t worked to score three goals. The first two goals are unforgiveable.

“They’ve got loads of character but they shouldn’t have to fight back in the first place.

“They’ll go away with loads of regret. They were as good as Aberdeen if not better.

“I felt we were good enough and had the players to go to the final and beat Aberdeen and it was certainly in evidence today for long parts of the game. ”