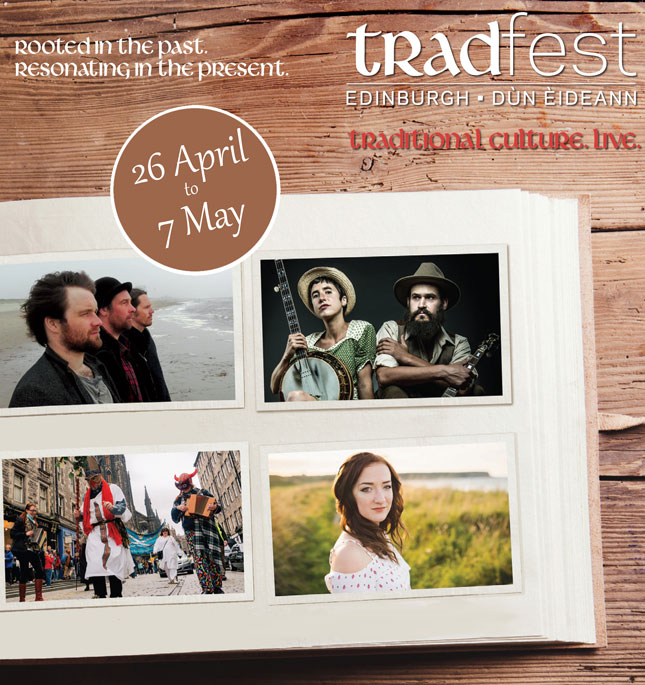 Tradfest will have over 100 events in celebration of this year’s theme as 2017 is the Year of History, Heritage and Archaeology.

Running from 26 April to 7 May 2017 this is the only festival dedicated to Scottish traditional folk arts, showcasing culture – LIVE!

This year’s music hub at Summerhall showcases The Soundhouse Organisation’s music programme, which includes appearances from Dean Owens and Amy Geddes as Redwood Mountain: Transatlantic Crossings as they build on The Book of American Folk Songs by archivist Alan Lomax, Ireland’s Connla who are taking the trad world by storm and the UK debut of American Roots duo The Lowest Pair.

Local Cultures at the Storytelling Centre

Local Cultures showcases music, song, storytelling and dance traditions highlighting the dynamic community heritage which is showcased with pride in the heart of Edinburgh’s World Heritage Site, making its inclusion as a key strand in Scotland’s Year of History, Heritage and Archaeology all the more pertinent.

Celebrations of Scotland’s languages are showcased at Poet’s Howff, A Braw Nicht Oot and Lorgan Bàta Nan Salm – Traces of the Psalmboats. Storytelling sessions traverse Giants, Fairies and Something For A’body to get to grips with Scotland’s legends.

Music and story fusions promise spell binding evenings with Seal Skins, Storms & Treasures Deep, The Music of What Happens and An Irish Hoolie, while cultural diversity and fusion is celebrated at Baghdad is Still Singing, ISSHO Drummers: From Taiko To Txalaparta, Unspun and Four Nations United – A Cultural Journey in The Heart of Edinburgh.

This year’s programme also contains a new strand, The People’s Heritage, which features a host of storytellers popping up to introduce key characters and unusual stories from Edinburgh’s popular history and culture throughout TradFest. This showcases the connection between people, place and community which Scotland’s Year of History, Heritage and Archaeology celebrates.

Ranging from The Knitting and Stitching Show at the Royal Highland Centre to the Look Again series at the National Library of Scotland; from Wee Folk Club sessions in The Royal Oak to nightly TradFest Sessions at Sandy Bell’s, see Edinburgh afresh as a capital of folk culture.

Experience walks, talks and trails, offering live, up close introductions to Auld Reekie, as well as highlighting the vibrant world of trad performance happening across Edinburgh’s communities, with lots of opportunities to get involved in drop in sessions and more in depth workshops, like the Royal Scottish Country Dance Society’s Children’s Scottish Dance Workshop through to Liz Doherty and Amy Geddes’ day long Fiddle workshop.