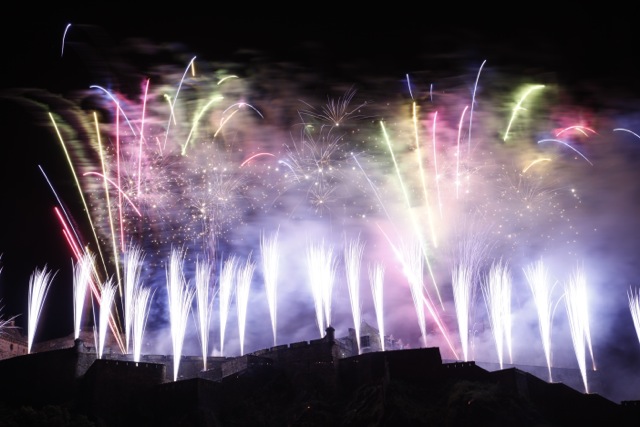 It was Conservative Councillor Joanna Mowat who first whispered the words Silent Fireworks, asking for this possibility to be looked into in a way that the visual spectacle would be retained but the noise impact reduced.

Council officers have clearly taken this project very seriously, and the Corporate Policy and Strategy Committee heard a full report earlier today which included comment from a Pyrotechnics Professor.

Professor Dr John Conkling is former Executive Director of the American Pyrotechnics Association and he said : “Because they do not include big aerial explosions, quiet shows cannot entertain a large audience.” At the council meeting today there was a resounding silence when this matter came up for discussion.  Although the Conservatives did lodge an addendum asking for more information this was not accepted by the Convener and the matter was put to a vote.

Convener Andrew Burns said :  “I think the report is very clear on the matters raised and I think there is no need for a further report.

Cllr Joanna Mowat said: “I think the report does not respond fully to the original motion. I thought hard about a constructive addendum to this motion instead of saying this recommendation is a bit of a whitewash.

“We have to balance the role of the city as a tourism centre with the interests of those who live here. I thought the report raised the questions about people living in the city centre but it did not answer them. It is extremely disappointing that my addendum was not accepted.”

Cllr Cameron Rose said : “If the report is deficient in information then we should ask for more information. It is important that we have a balanced report that gives us options rather than one written from one standpoint.”

Cllr Burns rejected the claim that this was not a balanced report. He said : “The further information requested in the addendum can be investigated by elected members with council officers and does not require any other report.”

The motion was carried by 8 votes to 5.

The council carried out an investigation and found there are no ‘silent’ fireworks but there are laser displays, which we are quite familiar with here in Edinburgh.

The council found that event organisers regard those as supplementary to a fireworks display rather than substituting them.

Councillor Mowat pointed out in her original motion to council : “The fireworks set off regularly in the city add excitement, colour and gaiety to celebrations in Edinburgh but that there is an impact from these regular fireworks on the residents living close to the launch sites and that there are concerns that the increasing scale of such may be having adverse impacts.”

She asked that the council looked into the impact of noise on health and wellbeing of people and animals and whether any damage to buildings results from the vibrations from the large fireworks displays.

It appears from the council’s investigations that there are no legal restrictions on the noise level that Category F4 fireworks can produce, although there are some restrictions for those in categories F1 to F3. These are the types of fireworks which can only be used by professional companies.

In addition the Fireworks Regulations prohibit fireworks after 11.00pm and before 7.00am.

Special events can get a dispensation (otherwise we would have no Midnight Moment on Hogmanay!)

The council says that if quieter fireworks were used then the bangers would not rise just as high and so audiences would have to be much closer if they wanted to see them. Council officials have taken the view that this would not be such a great spectacle.

Apparently Historic Scotland (now Historic Environment Scotland) told the Edinburgh Evening News in 2012 that fireworks displays do not have any adverse effect on structures such as Edinburgh Rock, and had monitored the position for a year.

There were only eleven complaints made to the council about fireworks, all concerned the noise level one of them raised a question as to the effect on pets and six about the timing of the displays.

The Royal Edinburgh Military Tattoo ordered their fireworks would be reduced in size in 2015, which they believe has reduced noise levels from the spectacles in the summer from the Castle Esplanade.

So it appears that the large fireworks displays which mark Edinburgh on the map in the summer and at Hogmanay will continue.