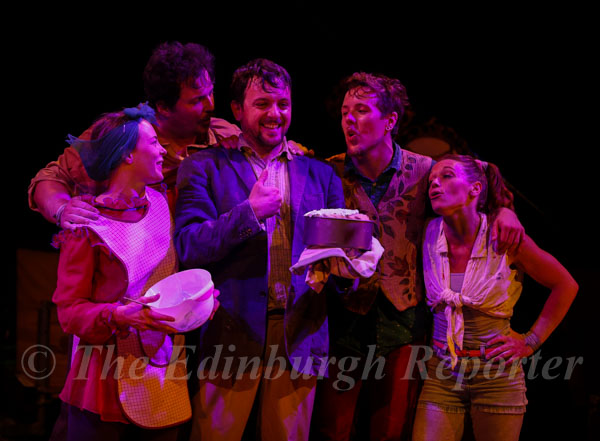 Lost in Translation Circus and their show The Hogwallops return to the Fringe this year at the Underbelly’s Circus Hub. It’s a show of physical comedy, theatrical storytelling and slapstick, and company director Annabel Carberry took some time to tell The Edinburgh Reporter more about it.

1.     After a prior successful run at the Fringe, and British, Italian, and Irish tours, The Hogwallops are back in Edinburgh. What’s been happening since Edinburgh last saw you?

After going international last year, this year we have been touring the UK widely with an Arts Council England supported tour produced by Jacksons Lane Theatre. We have toured all sorts of venues, but we were particularly looking forward to bringing the show back to Edinburgh – somehow it feels like home already after only two years. It’s a great festival.

2.     Your aim is to blend dynamic circus skills and character-driven theatre. What was it that attracted you to this formula? And what in particular brought you to Roald Dahl’s The Twits, which provides some of the inspiration for The Hogwallops?

Our team comes from a mixture of theatre and circus backgrounds. I would say that we are particularly interested in both what the human body is capable of (i.e.: the super human/circus aspect) and how the humanity of it can be communicated (the vulnerable, emotional/theatre aspect). They are challenging to combine but we believe they can be a powerful combination. We are interested in the use of the human body as a form of expression, both in the extraordinary and the universal.

When we first started thinking about using a family as the basis for a show – and particularly looking at dysfunctional one, with elements of the humourous and grotesque – The Twits immediately came to my mind. They are not exactly a family but they are an odd collection living together and just the images that are used – the furniture on the ceiling for example – seemed to lend themselves particularly well to the circus format. We haven’t used the narrative as such but it was more a sense of this combination of humour, imagination and incredible things happening, along with this element of darkness that is in that book particularly. 3.     In this fractious year, there is quite a lot of dark, fractured theatre on the Fringe. How does The Hogwallops fit into the 2016 Fringe?

I think as a company humour is important to us, and for people to be able to enjoy their time with us and go away with a smile, I think in time of disquiet or fracturing that is even more important. However we also think its important not to discount or ignore the more difficult aspects of life and emotion either. A family environment is both loving and frustrating and difficult, and it’s a very universal way to explore this mixture of experiences.

4.     One of the aims of Lost in Translation Circus is to work across language and cultural barriers. Have you noticed any differences in the ways your different audiences have reacted to The Hogwallops?

Humour is always slightly different (sometimes very different) with different cultures, different audiences respond slightly more strongly to different aspects of the show, but there are fairly universal things about the way human beings interact with each other especially on a family level, and this is more universally expressed with the body.

5.     Dahl’s stories for young people and children are anarchic, and sometimes quite dark. Less well known, his stories for grown ups are tremendously well crafted. What sort of an audience are you hoping for at The Hogwallops?

The Hogwallops was always created for a family audience, but we hope to reach as diverse a group of people as possible and as wide an age range as possible. We always tried to create it with universal themes that most people could relate to, and scenes that both children and adults could enjoy. And actually the show always works best when we have a really wide range of ages and backgrounds in the audience.