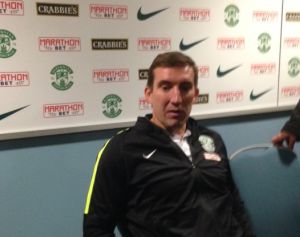 Alan Stubbs is expected to be unveiled today by English Championship club Rotherham United who finished the season one place above the relegation zone.

Hibs  reluctantly granted the Millers  permission to speak to him and it is understood that  a three-year deal was agreed.

United Chairman Tony Stewart said that compensation is the only thing left to sort out and Stubbs is expected to take  first-team coach John Doolan with him.

Betting has started on Stubbs’ replacement with John ‘Yogi’ Hughes, who last month quit Inverness, is the bookies’ favourite at 4/1.

Other names being touted include Alex McLeish, Tony Mowbray and Malky Mackay.