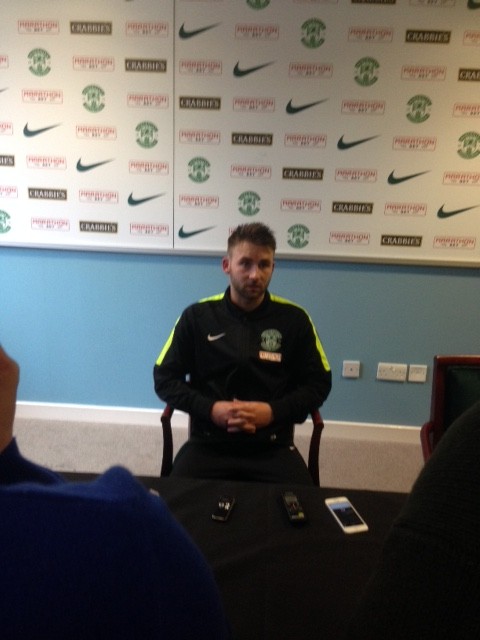 Hibs striker James Keatings accepts that Falkirk are in the driving seat in the battle for second place however he has not given up hope that the Easter Road side will finish runners up to Rangers after the final whistles blow on Sunday.

Two early goals from the striker appeared to open the floodgates against Dumbarton however an inspired goalkeeping performance from Jamie Ewings kept the final score at 4-0.

There was some debate as to the scorer of Hibs’ third with most describing it as an own goal from Kevin Cawley however it is understood that referee Don Robertson claimed the last touch was from Keatings.

Hibs now go into Sunday’s game against Queen of the South  level on points with Falkirk but with a three goal deficit. If Falkirk beat Morton, Hibs will need to score at least four times.

After the game Keatings said: “Before the game the manager did not mention to go and get goals, he just told us to play our natural  game then at half time he told us to be patient and not try to force it too much, just get the ball from side to side and find open spaces but it was quite difficult near the end to get through them.

“If we had went ‘gung ho’ they would have camped in and made it a lot more difficult to get goals.

“Obviously it’s in Falkirk’s hands but getting four goals tonight gets the goal difference down.

“Going into the end of the season we know that we are playing for something and that’s what we wanted, so it’s down to us to try and score as many goals as we can this weekend. We will have a game plan and try and stick to it.

“There will be fans there sitting with radios listening to both games so we will have to see what happens but now its up to us to show the character we have in that dressing room.

“The last two years have been amazing for me. Everyone wants to play in successful teams and it’s the same for me. My personal target is to score more than last year so I have one more game to go.”