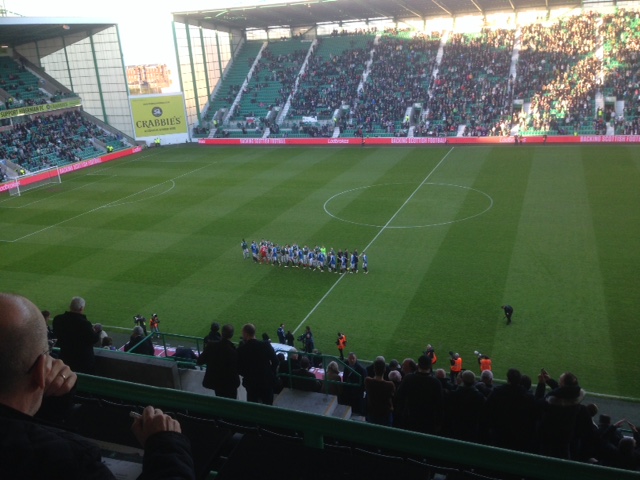 As anticipated, Hibs did not provide a guard of honour for the champions and Head Coach Alan Stubbs made two changes to the starting XI that qualified for the William Hill Scottish Cup Final on Saturday by beating Dundee United on penalties.

As expected Mark Oxley returned in place of Hampden hero Conrad Logan who took his place on the bench, and Niklas Gunnarsson replaced Liam Henderson as Stubbs elected to play a 5-3-2 formation.

Rangers manager Mark Warburton made one change with cup-tied Michael O’Halloran taking over from former Hibs’ midfielder Dean Shiels. 18-year old Robbie McCrorie won a seat on the bench ahead of Cammy Bell.

Rangers started brightly playing some nice possession football but it was the home side who took an early lead when Jason Cummings pounced on a slack Rangers throw in and ran between two defenders before firing an unstoppable shot past Mark Foderingham.

Rangers had a penalty appeal denied moments later when the ball appeared to strike Paul Hanlon’s hand then Kenny Miller lifted the ball over the back four into the path of James Tavernier but Mark Oxley produced a fine save to deny the full back.

Hibs added a second in the 18th minute when David Gray sent Anthony Stokes clear down the right wing. The on-loan striker sent a cross into the danger area and Foderingham misjudged the flight of the ball and palmed it into his own net to the delight of the Hibs’ fans in the stadium.

Miller was booked for bringing down John McGinn who was breaking clear then moments later he committed an identical infringement on Marvin Bartley and should have been sent off however referee Kevin Clancy decided a talking to was sufficient.

In the 37th minute Cummings won possession of the ball in midfield and slid the ball into the path of Stokes. The ball was returned to Cummings who went down under the challenge of a Ranger’s defender and was immediately booked for diving.

In the next passage of play Cummings was lucky to avoid a second yellow card after a flare up with Dominic Ball but again the referee decided a telling off was enough.

Rangers pulled one back just before the break when Tavernier broke down the right and sent a speculative floated cross which was misjudged by Oxley. The ball rebounded off the bar into the path of Jason Holt who prodded the ball into the net from close range.

The second half started as the first had finished with play raging from end to end at 100 miles per hour.

McGinn then Cummings both had long range efforts which went over the bar as Hibs looked to regain their two goal advantage but at that stage Rangers looked the more likely to score.

In the 57th minute however Hibs added a third. Fraser Fyvie found Cummings who in turn sent a diagonal ball to Stokes but his shot as deflected past the post. McGinn sent the resultant corner high to the back post and Hanlon rose above the Rangers defenders to head the ball back across the face of the goal. Stokes and Tavernier both challenged for the ball and it fell into the path of Gunnarsson who fired a powerful drive high into the roof of the net.

Hibs then sat back although the fans had something to cheer when Logan warmed up to a rapturous reception from the supporters.

With 20 minutes remaining Cummings was brought down just outside the area and Foderingham produced a good save to prevent Stokes adding to Hibs’ lead.

James Keatings replaced Cummings and Dean Shiels replaced Miller who left the field to a chorus of boos from the home supporters.

With six minutes remaining Rangers made it 3-2 with a superb 30 yard strike from Barrie McKay and from then on it was all Rangers as Hibs struggled to get possession of the ball.

The fourth official indicated four minutes of additional time and Oxley produced a great save to deny Holt then in the last minute Rangers were awarded a controversial corner. The Hibs fans held their breath, remembering that their side threw away a two goal lead against Falkirk last week but Oxley came off his line to catch the ball under pressure and the referee blew his whistle sparking wild celebrations from the Hibs’ fans.

After the game Stokes was asked whether he was claiming the goal and said: “I’m not bothered who scored, the most important thing was to in the game. I’ll take any sort of goal in a game like this. we are fully focussed on finishing second and we have given ourselves a chance now”