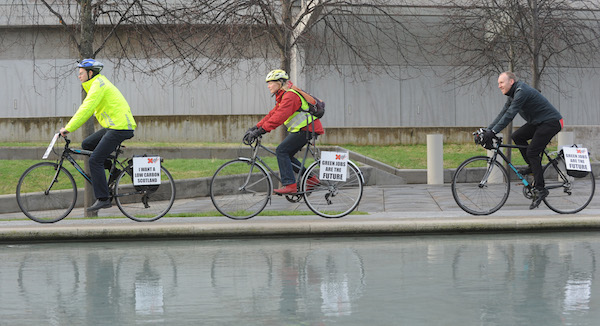 As we mentioned earlier there was a team of cyclists riding around Holyrood this morning to deliver their election manifesto to those standing for election later this year. The team from Stop Climate Chaos Scotland rode around the capital earlier delivering the campaign’s Scottish Parliament manifesto to all of the political parties. The group had to postpone a planned journey last week because of Storm Gertrude. Gail Wilson, Campaigns Manager at Stop Climate Chaos Scotland said: “We weren’t immune to the exceptionally bad weather many Scots have been experiencing recently and last week it wasn’t safe for us to be out in the strong winds. Climate scientists have linked the changing weather patterns to climate change, and these links are becoming clearer.

“People are also making the connections and with more flooding and increasing storms predicted for Scotland and the UK we want to see urgent action from political parties of all stripes.”

Stop Climate Chaos Scotland has also launched an online campaign at stopclimatechaos.org/election-2016, asking members of the public to write to the political parties, urging them to support policies that will secure a low carbon Scotland by 2020.