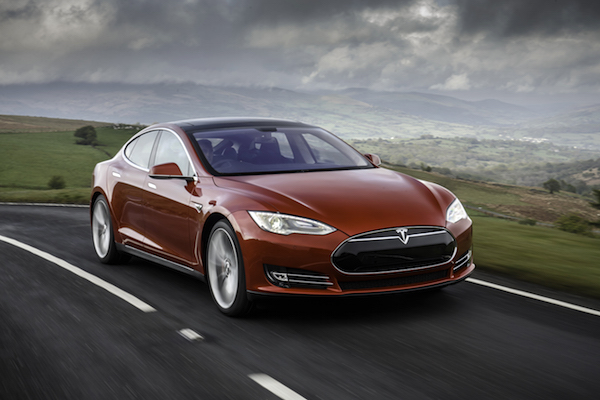 by Oliver Stephen our motoring correspondent

“A technology company that makes cars” – that is certainly the image that strikes you when you step into Tesla’s new retail store on Multrees Walk, the high end fashion area just off St Andrew Square in Edinburgh. No need for a garage forecourt crammed full of cars: the grey industrial shop floor frames the single example of Tesla’s range – a new Model S – as well as a bare chassis showing just the engines and battery pack used to drive it; the ultra-minimalist white walls support the interactive mounted screens which allow customers to customise their selection of optional extras before ordering their car for delivery from California; and the striking stairway in the centre of the store leads to an upper floor where hot desks are populated by Tesla team members.

Tesla sells all of its own cars: there is no need for a large retail chain to sell such a unique product.

To the product and where to begin? The new 7.0 operating system accessed by a 17” tablet screen which is the dashboard, supports a groundbreaking autopilot function: it will keep your car in lane on the motorway including round all the corners.

It will move lanes for you when you use the indicator; it will keep you at a constant speed unless someone pulls out in front of you, then it will keep you a safe distance from the car in front. For all those folk that dread the parallel park in front of an audience of pedestrians, it will also park the car for you perfectly every time. You can’t quite do this while sitting in the backseat but it’s not far away. The Tesla team explain the operating system updates as a feature which will mean your car actually improves with time. The operating system offers seemingly unlimited customisation to your driving experience, whether you want the steering to feel sporty or comfortable, or you want to car to inch forward like an automatic in drive or stay stationary until you press the accelerator.

On the subject of acceleration, this is where the Tesla changes from a cool piece of technology, (housed in an understated family saloon body) into a fire-breathing dragon. In the model that I drove for The Edinburgh Reporter (Tesla Model S P90D ‘Ludicrous Speed’ Upgrade), the two electric motors, driving all four wheels, propelled us from 0-60 mph in 2.8 seconds.

Just think about that for a moment.

To put that in context an F1 car will only do it in 2.2 seconds, and only a handful of road cars won’t be in your rearview mirror should you challenge them to a face-off at the traffic lights.

This is incredible for a fully electric car. The instant response of the electric motors presses the driver and passengers against the backs of their sporty bucket seats and you only just manage to keep those nice pastries offered in the Tesla store in your stomach. The G-force is outrageous.

Other features include 7 seats, 2 boots, panoramic glass roof, 21” alloys and great lines. To purchase a fully loaded version will set you back well over £110k although Model S prices start from £56,200 before incentives. But if that sounds like a lot don’t despair.  There is a £5k incentive provided by the Government and if purchased by a business the car qualifies as a capital allowance fully tax deductible in the first year (so assuming you have the required profits takes another £20k off the cash cost).  There is also only 5% Benefit in Kind (BIK) charges when the car is owned by a company. Running costs are much lower with zero road tax, an 8 year warranty and unlimited free charges at Tesla Superchargers. In practice you will most likely have a government-subsidised charger fitted at home and a full 300 mile battery charge is likely to cost you about £10.

Perhaps us conservative Edinburgh folk will point to the limited range and network of rechargers, that it is a relatively new product and its components are therefore susceptible to failure, but if we set these non-specific, non-critical fears to one side and embrace the future possibilities already arriving in the form of the Model S, we will realise we have to have one.