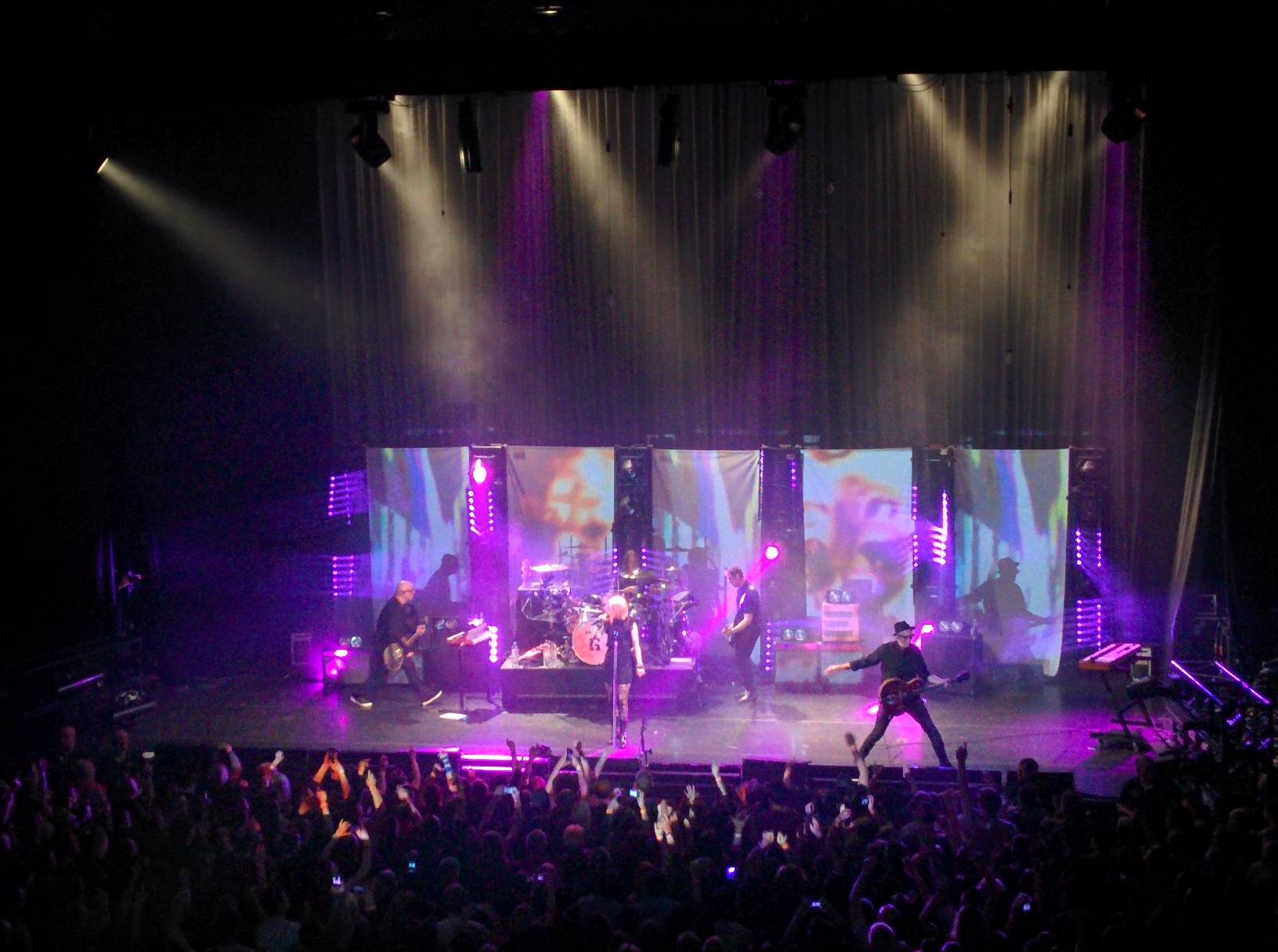 Garbage have spent the last few months setting aside the recording of their upcoming album to celebrate the 20th anniversary of their eponymous debut album, Garbage. The tour to commemorate the album, called ’20 Years Queer’, visits selected countries where they have played and where the band exploded onto the alternative rock scene.

The self-titled album remoulded the way alternative rock was initially perceived, as Garbage combined every genre, sound, clip or whatever they could invent, in order to produce an innovative piece of sonic mastery.

A white sheet dropped down in front of the crowd 15 minutes before Garbage arrive on stage. It showed a video of various public happenings in 1995 and some band camaraderie on tour – while headlining or when they gave Smashing Pumpkins a run for their money while they briefly took over as one of the biggest bands in the world.

The band played ‘Subhuman’ in silhouette, and then it dropped to the floor as soon as ‘Supervixen’ began. The crowd elation was already at a peak, and that dominant guitar riff brought back a memory for many people in the audience of when they first popped the album into their boom boxes

Lead singer Shirley Manson said half way through the show that the band would only play songs from the debut album era, containing every song from the deluxe edition that has lately been released – b-sides, covers, the lot – some of which Manson claimed “may never be played again”.

The remaster is perhaps unnecessary, as the original album still sounds as vital as it did when it was released in 1995, but we got a mound of b-sides, outtakes, covers and live songs to fuel a Garbage obsession. While the band look like they haven’t aged since the release of said album, they sounded unblemished after spending years in the turbulent music industry that has led them along very doubtful paths.

With Shirley Manson being native to Edinburgh and spending half her life living in the capital, she was evidently emotional, highly energised, and almost speechless at the crowd response. Yet beyond that, she was on usual chatty form. She spoke of walking past The Usher Hall every day and only dreaming of playing at the prestigious venue. All the stops were pulled out for Garbage’s first ‘home town’ gig in 13 years with Manson’s father unexpectedly appearing on stage to raise a toast to twenty more years of the band.

But overall, the concert reflected an underlying sadness which Manson had to address only four songs in. It was only 24 hours after the Paris attacks, and the lead singer was quick to say that the Eagles of Death Metal incident could happen at any concert. Manson pleaded for solidarity, and dedicated two minutes of the set to emphasise her point – which was greeted with a welcoming applause by the audience, who stood by her sentiments all the way.

Celebrating Garbage meant that the set had to include iconic power-pop songs such as ‘Only When It Rains’, ‘Stupid Girl’ and ‘Vow’, which still sound as vibrant as they did twenty years back when Manson was singing the first track on Saturday Night Live.

It’s almost risky playing an entire debut album along with all the extra trimmings that happen to be some of Garbage’s highlights, and could have made it on the album or subsequent albums. Garbage pulled it off – it’s as if every one of the 1800 people there is a hardcore fan, or maybe everyone has turned into one now.