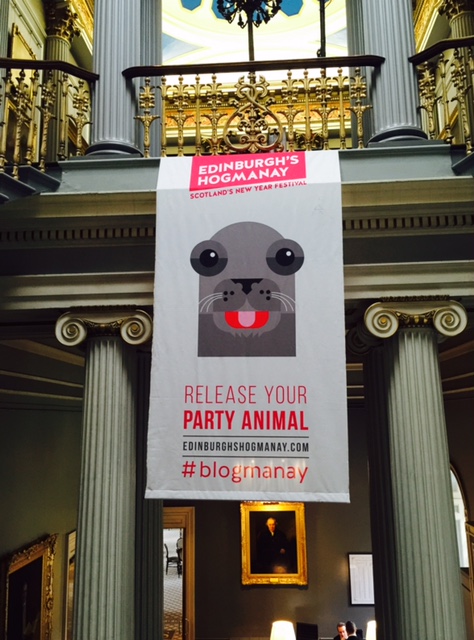 This year’s Edinburgh’s Hogmanay extravaganza was launched at the Signet Library this morning amid much music, bacon rolls and the speeches ensued.

This year the organisers are expecting the event to be a sell-out as in past years, so get your tickets quickly for those events that are ticketed. Some are free like the Scot:lands events on New Year’s Day.

The Home of Hogmanay will welcome visitors from abroad as well as including locals in the Torchlight Procession, the Street Party with headliners Biffy Clyro and local band Idlewild.

The Culture Secretary Fiona Hyslop was at the launch this morning along with Pete Irvine of Unique Events and Councillor Richard Lewis who is the Festivals Champion and Culture Convener. We spoke to them all afterwards and will have a video report and more photos later.

The Street Party will have more stages and screens than ever before and some Food and Drink Villages. The Castle Stage is new this year and will have Scottish bands Rura, Peatbog Faeries and Shooglenifty.

The celebrations begin on Wednesday 30 December with the family-friendly Torchlight Procession as 10,000 torchbearers wind their way through the city streets lined with tens of thousands of spectators.  The Procession, which is supported by EventScotland, will move from George IV Bridge towards the finale of the Son et Lumière display on Calton Hill which can be viewed from across the city and from the streets surrounding the hill.  Access to Calton Hill will be exclusively available for torchbearers and their accompanying friends and family.

On Thursday 31 December, the musical line-up across the seven stages in the centre of the city promises to deliver an exhilarating party soundtrack for the anticipated 75,000 revellers.  The flagship Concert in the Gardens (which sold out in a record 10 days) features headliners Biffy Clyro making their only UK appearance this year who are joined by very special guests Idlewild and Honeyblood for a very strong all-Scottish line-up.

Maxïmo Park said, “Where better to spend New Year’s Eve than the Home of Hogmanay?!  Edinburgh is a spectacular city at the best of times, but it undoubtedly outdoes itself at the turn of the year. The Street Party will be a double celebration for our band as it’s ten years since our debut album came out, which guarantees a party mood.”

The Frederick Stage (Party) provides the soundtrack to the whole Street Party with DJ sets from BBC 6 Music’s Craig Charles, who presents his ‘Funk n’ Soul Show’, alongside Edinburgh’s own Simon Hodge. VJ’s Buttercup and Pixels mix cutting-edge visuals to accompany the dance tunes which are relayed on seven screens along the length of Princes Street and throughout the Street Party arena.  The Mound Stage (Cabaret), which alters position this year, features the Guilty Pleasures cabaret performers, fresh from their sell-out shows at the Edinburgh Festival Fringe in August.  Guilty Pleasures offers a heart-thumping, show-stopping, disco-dancing, rollercoaster of a night’s entertainment featuring DJ’s, dancers, performers and audience participation.

The perfect ending to the event calendar for the Year of Food and Drink Scotland 2015, Edinburgh’s Hogmanay has signed up to Scotland’s Food Charter for Events. Organisers have created new refreshment and break-out areas around the Street Party arena including Market Street and the West End of Princes Street. The Mound Precinct, leading into East Princes Street Gardens, offers a food and drink experience, with retailers from the Edinburgh’s Christmas European Market on hand with a feast of cuisine beneath the exhilarating Star Flyer and Big Wheel attractions, offering revellers a sky-high view of the capital.