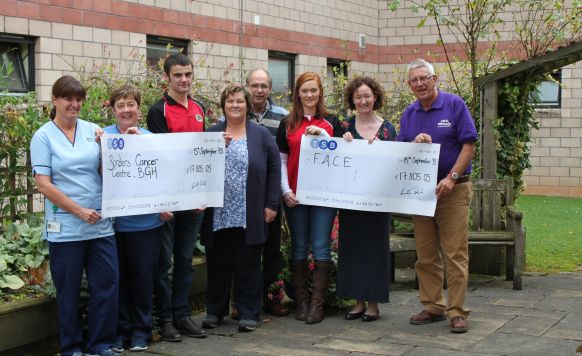 Linda Dick who has recently finished treatment for breast cancer decided to fundraise for local charities to help make this difficult time a little easier for others in the same situation.  She chose to fundraise for the Macmillan Centre at the Borders General Hospital and Fighting Against Cancer Edinburgh (FACE) at the Western General Hospital in Edinburgh.  She wanted to give something back having received treatment at both hospitals.

Linda and her family hosted an open charity stockjudging and auction with Peeblesshire Junior Agricultural Club on 4th August at their farm near Peebles which raised a staggering £35,610.10 which was split giving £17,805.05 to the Cancer Centre at the BGH and £17,805.05 for FACE.

Linda went for a routine mammogram, thinking she had nothing to worry about until she learned that there were suspicious areas in her breast and lymph nodes. She had an examination, ultra sound and biopsies and had to wait six long days until she received her results. When she was told she had breast cancer, she was given chemotherapy, a mastectomy and radiotherapy and she said that “during this stressful time the little extras – plants, newspapers, tea, coffee & biscuits, even tissues, provided by FACE and the Macmillan Centre helped make it all a bit easier.”

Linda said of her treatment, “I was unlucky – as my son Colin commented, I didn’t let many side effects pass me by! The hair loss was the least of it: it affected my nails, I couldn’t eat anything other than ice cream during the worst periods – the drugs had stripped the lining off my throat, so that even eating a piece of soft bread was like swallowing a bunch of nails, I got pins and needles in my hands and feet which drove me mad but I was lucky enough to receive charity funded aromatherapy during each chemotherapy session which was amazing. Throughout it all the little extra comforts provided by charity and volunteers make a huge difference when you are sitting in your own private hell having noxious chemicals pumped into your veins.”

Judith Smith, Nurse Consultant for cancer and palliative care, said “donations enable us to do the things we cannot do with our core budget. Linda and Peeblesshire JAC have raised a huge amount of money and we will be able to do something huge for the centre and our patients with it. Thank you all for your hard work!”hoto L-R: Elaine Bryson(Macmillan Centre BGH), Judith Smith (Macmillan Centre BGH), Michael Aitken (Peeblesshire JAC), Linda Dick, Jim Dick, Fiona Black (Peeblesshire JAC), Fiona Taylor (Edinburgh Cancer Centre) John McAuley (FACE