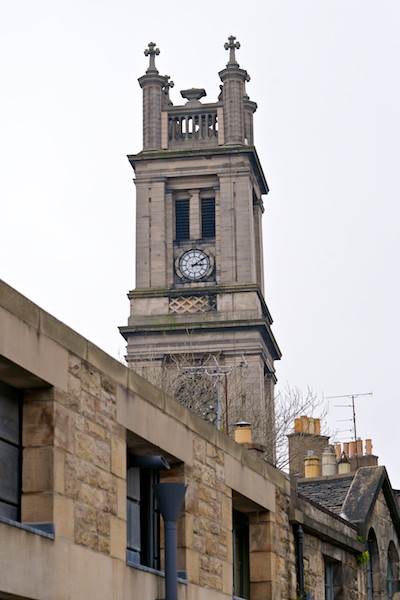 Momentum Venues presents such a varied array of shows that one would be hard pressed to find a reason not to venture down Howe Street to their hub at St Stephen’s Centre.

Confronting the task with impressive enthusiasm and ambition, this is Momentum’s first Fringe Festival.

They are presenting no fewer than 12 different shows over their three performance spaces within the Centre- even if one performer referred to his performance space as “the Studio- what I prefer to call the corridor between the kitchen and the toilet.”

A mammoth task for this company; what lies in store? At the lighter end of Momentum’s productions, we find Bebe and Luca present… The Cabaret Farce! These lovely ladies invite audiences to share a sequin-filled, decadent evening of laughter, accompanied by their carefully selected band of bright young things in tight shirts. As they put it, this is “cabaret after a few too many G+Ts.”

Edith In the Dark brings us into the not-so-child-friendly world of E. Nesbit, author of the beloved The Railway Children. This play explores the little-known fact that Nesbit was an aficionado of gothic horror. Writer Philip Meeks creates an atmospheric, shocking and sometimes very funny evening of surprises- think The Famous Five meets Dracula. Among the rest of the shows strictly for grown-ups, though for different reasons, are More C*nt Than Can’t: The Scandalous Life and Fast Times of Lord Byron and 12.10.15.

(These shows have already received 4-star and 5-star reviews, respectively, from The Edinburgh Reporter.) For the children, a good selection: the charming TwoRep Theatre present Kipling’s Just So Stories through a mixture of puppetry, ukulele and singing. Watch out for the particularly amusing cautionary tale of The Elephant’s Child. TwoRep are also staging an adaptation of Antoine de Saint-Exupery’s The Little Prince. A slightly stranger turn comes from Poland’s The Biggest Marionette Circus in the World. Whilst impressive, it is worth noting that their 10ft talking animal puppets may frighten smaller children. Musicals are a key part of the Fringe and Momentum hosts two. Ushers: The Front of House Musical is a tongue-in-cheek tale of the small army of staff who keep shows on the road from off-stage. With sharp choreography and clever lyrics poking fun at wage gaps and delayed audience members, this one’s not to be missed. Shout! The Mod Musical is less understated, more of a feel-good colour-explosion.

The all-girl cast take you back to the Swinging Sixties for “a journey through [its] infectious pop anthems and ballads.” Speaking of the Sixties, There’s a Guy Works Down the Chip Shop Swears He’s Elvis is not strictly a musical, but it is a play with the songs of Elvis liberally scattered throughout. It centres on the only time spent in the UK by ‘The King’, when he touched down in Prestwick Airport on 3rd March, 1960- remember that, it might win you a pub quiz one day.

The play follows four young female members of the Elvis Fan Club (Kilmarnock Branch) all the way through from the sixties to the eighties. Funny and soulful, this one’s for the small town rock’n’roll fan in all of us. Momentum will also be hosting singing stars Keith Jack and Peter Straker in on-off afternoon shows. To bastardise a famous phrase and bring us neatly back round to Rudyard Kipling, if there isn’t even one thing on that rather long list of shows that you feel like seeing, you’re a much fussier man than I am, Gunga Din.

Momentum Venues are really pushing the boat out for their first Fringe and I recommend seeing as many of their shows as you can. If that’s not enough, St Stephen’s lies on one of the few downhill walks one can make in Edinburgh. Your legs deserve a treat.

Momentum Venues at St Stephen’s Centre will be hosting shows from 5th-30th August. More info on all of shows listed above, and more, can be found at momentumvenues.com. Momentum also hosts regular open mic nights.