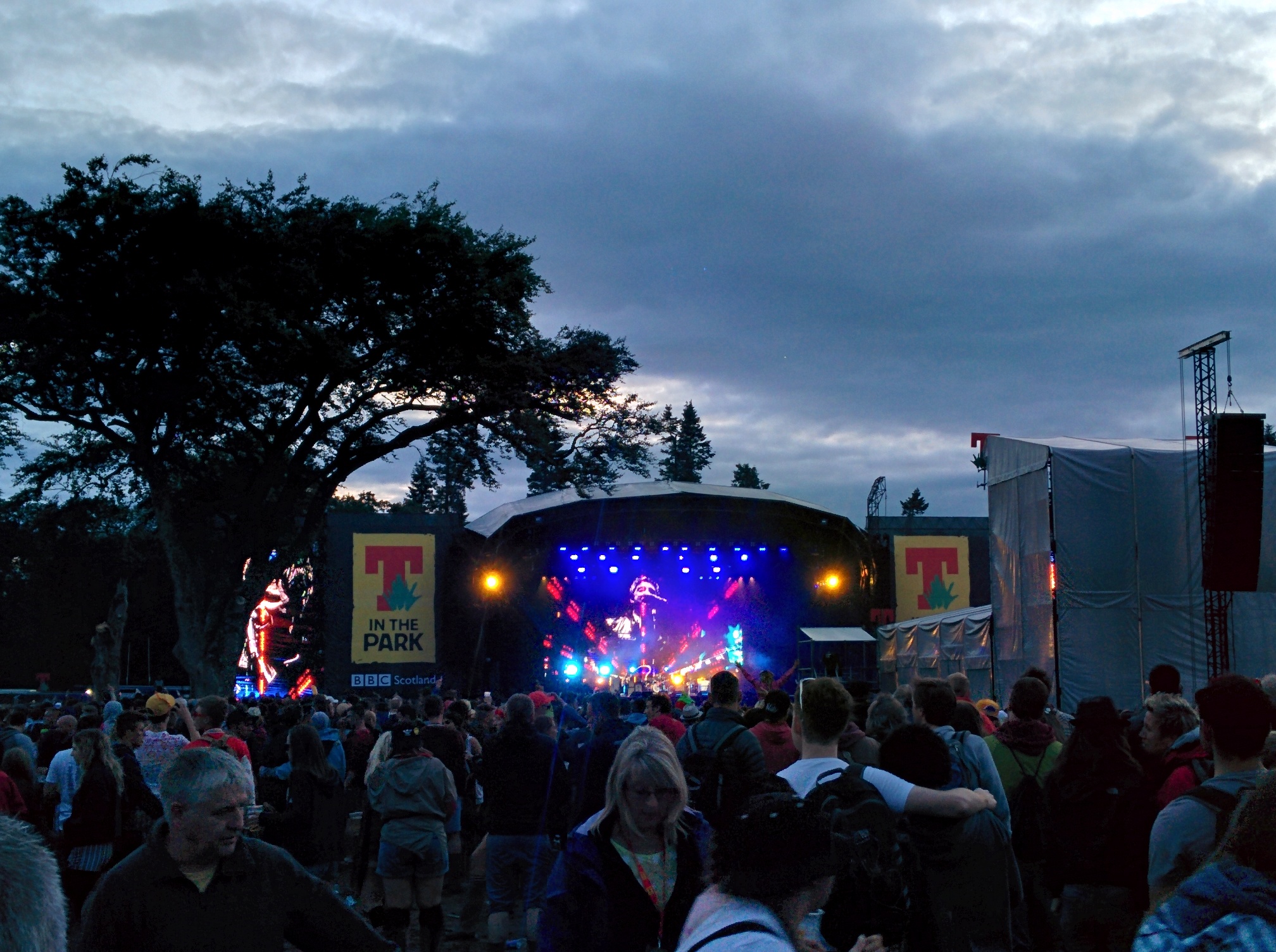 At the beginning of the day, Wolf Alice followed the wonderful Marmozets on the Radio 1 stage. Their grunge-infused melodies mixed with a raw indie sound, alongside the Ellie Rowsell’s Joy Formidable-esque vocals and METZ-style ferocity, exuded intensity from one of rock music’s latest stars. It’s easy to see why they’re this summer’s hearsay, after getting their debut album number two on the UK albums chart. People flocked to the stage to see what the fuss was all about as the band demonstrated why they got number one in the first place, and why they were one of the biggest stars at this year’s Glastonbury Festival.

The frustration of all the rain and the mud was soothed by Admiral Fallow’s delicate set in the King Tut’s Wah Wah Tent where people sat on the soggy ground like they were watching a band in the sun. The miniscule crowd was fascinated by the Scottish band’s elegant performance, whose orchestrated indie was enough to let the laid back individuals at the festival enjoy some peace and quiet while riotous acts The View and Peace tore apart the other two bigger stages.

Everything Everything’s creeping, snail’s pace success was not exemplified in the performance; you could have put them up near the top of the bill on the King Tut’s Tent for them being one of the highlights of the weekend. Even though the tent wasn’t at its maximum capacity, Everything Everything looked composed through a series of synth-charged tracks from their three albums. The zealous crowd went wild for ‘Cough Cough’ and new fan favourite, ‘Regret’.

One of the more thought-provoking aspects of the weekend was wondering why Modest Mouse had an army of musicians on stage. Two drummers, several doing percussion, two bassists at points and two guitarists. Maybe the last part is needed, but everything else? Probably not. Modest Mouse built up the release of their new album, Strangers to Ourselves, massively. Everybody had huge expectations for one of indie rock’s most exciting outfits, but it fell flat – all because of Isaac Brock being trapped in his ego bubble. Yet momentarily, we got some classic Modest Mouse: ‘Dashboard’, ‘Ocean Breathes Salty’ and, of course, ‘Float On’. But dealing with playing as the same time as Catfish and the Bottlemen, who drew one of the biggest crowds of the weekend at the Radio 1 stage, clearly wasn’t an issue for Brock and his legion of backing musicians – as they performed their equable set before Sunday night’s chaos.

The latest poor man’s Coldplay from Ireland have spent the last three years at T in the Park building up a reputation for themselves, but Kodaline didn’t necessarily justify their slot – regardless of the gigantic crowd who bathed in the accompaniment of their near-stagnant melodies and dreary hit singles. For a set where most songs blended into one, the one saving grace was the zest of the congregation that joined Kodaline in singing along to their half-hearted love songs – maybe because, for once, the weather was at its peak for the weekend.

Stereophonics have spent the last eight years trying to find themselves back in the sweet spot of headlining festivals, where they were once at the top of all major festivals in the UK; now they have to settle for second-to-last. The previous years of T in the Park audiences witnessing Stereophonics live at the festival have stated constant disappointment at their performances, but this year showed the Stereophonics that we all fell in love with. The return of a few ‘Word Gets Around’ tracks gave fans hope for the return of a band once at its peak, with the new material certainly promising in terms of recent releases. Kelly Jones and co. ended the show with a wave of crowd-pleasing hits as Jones said, “we’ll see you in December” as they left the T in the Park stage for their eighth time.

After T in the Park in 1994, Oasis headlined every festival they ever played. Noel Gallagher probably expected to be the penultimate band on at every festival he played as a solo artist. It didn’t take long for festival organisers around the UK to decide that Gallagher’s second album, Chasing Yesterday, was the moment to get him at the top of the bill – even if he came under tough competition from The Prodigy for the T in the Park main stage headlining slot and the fans who were apprehensive on who to see.

Nevertheless, Noel Gallagher should know how to headline a festival, right? He’s perhaps one of the most experienced musicians on the festival front. Some stops were put out especially for the headlining slot – a choir, small brass band and some trippy visuals – but it was the music that inevitably does the talking; a performance that fell slightly flat, and probably vastly compared to The Prodigy.

The crowd, stacked with fans in Oasis t-shirts and Pretty Green, reacted ecstatically to Gallagher’s favoured solo material – ‘AKA… What A Life!’, ‘In the Heat of the Moment’ and ‘If I Had A Gun…’ – but raised the bar for the six Oasis songs that he performed. Noel opted not to perform the obvious choices, bringing out tracks such as ‘Digsy’s Dinner’ and ‘Fade Away’. But when he did play the fans’ favourites, the rowdy audience were serenaded with ‘Whatever’, ‘The Masterplan’, set closer ‘Don’t Look Back In Anger’, and an awe-inspiring stripped back version of ‘Champagne Supernova’.