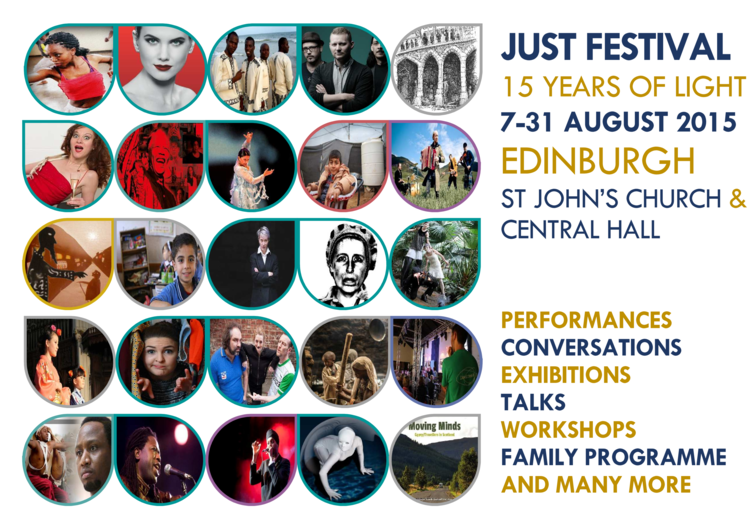 There is, says Fiona Stewart, ‘something provocative about telling the truth’.

Foolproof Creative Arts, of which Fiona is Creative Director, is one of this year’s Just Festival Partners, and although she is talking primarily about Foolproof’s own community-building work, she could as well be alluding to the festival itself. This year it offers its most ambitious programme yet of drama, music, dance, talks, workshops, debates, films, family events and exhibitions – events that not only entertain, but also challenge us to look at the lives of others, from travelling people in Scotland to refugees in Syria; from human trafficking to sectarianism; from African drumming to Spanish flamenco; from ways of life to ways of death.

St John’s Church has been home to the festival for many years, and on Wednesday it hosted an inspiring preview of what we can look forward to in a few weeks’ time.  Compere for the evening Susan Morrison has been described as a ‘comedy volcano’; in August her Stand-Up Sundays will provide ‘a romp through the seedy, silly and salacious side of Edinburgh’s history’ – but Susan can also do serious – ‘this isn’t a festival that ducks issues’. Introducing fabulous music from Dean Owens and Simply Soweto Encha, amazing acrobatic drama from Voice Box Theatre and some highly unusual burlesque from Monica Salvi, Susan also spoke about the festival’s wider aims of creating a multi-national, multi-belief community, and eventually a more united world. The Just Festival, she says, fills a gap, ‘it’s more than all the other festivals’. Wednesday night’s speakers explained what this meant.

Kenny McAskill MSP (‘if you thought you were getting Danny, my apologies…) is no longer Justice Secretary – ‘that means I can say what I like, but I also have to write it..’ – but he’s still passionately committed to making the world a better place. Although government has a role in tackling human trafficking, we need, he says, to realise that ‘we are all our brothers’ and sisters’ keepers’. We need to offer sanctuary; in short, we need to do our bit. The media may sell papers with sensationalist articles about prostitution, but most trafficking is, says Kenny, quiet and insidious – it’s happening all over Scotland, in tiny villages, on remote farms, in fisheries, on boats – and it’s not about sex, ‘it’s modern day slavery’. Most of the people caught up in it are not economic migrants, they are fleeing wars in countries like Syria and Eritrea only to end up as prisoners, kept in dangerous, inhuman conditions, intimidated, unpaid, pressurised to keep quiet. Their silence, ‘is not a sign of complicity, it’s a sign of the nefarious actions of those who exploit them’. Politicians, business leaders and councils must all play their part in stopping trafficking, but every single one of us needs to report what we see, to help and advise, to give support, love and care. ‘Together’, promises Kenny, ‘we will overcome’. The Just Festival will look at this issue through drama (Foolproof’s Help Yourself) and conversation (Modern Day Slavery and Re: Value of Human Life).

One charity that works across the world to strengthen communities from within has its headquarters right here in Edinburgh. Mercy Corps, another Festival Partner, works in over forty countries, offering humanitarian aid in cases of natural disaster, political upheaval and conflict – but as Ali McLeod explains, although Mercy Corps responds immediately to urgent needs for food, water and shelter, its work doesn’t stop there. Instead it believes in ‘a hand up, not a hand-out’ and its field staff – 93% of whom are from the country where they work – stay to partner communities for their long-term recovery and resilience. Light Up Liberia, Mercy Corps’ event on 26th August, will look at one of the poorest countries in the world, where energy costs are the highest in Africa. Only 2% of Liberians have access to a power supply, but Mercy Corps is building a model for solar electrification via village energy hubs.

Conflict is, of course, nothing new.  James Urquhart’s Letters to Aberlour draws on the letters from ‘old boys’ to the Aberlour Orphanage during the First World War; they were writing to the only home they knew. Sixty-two of them died, and for these old boys, every death was the death of a brother. The production will be staged 7th-16th and 18th-31st August at the Just Festival’s new additional venue, Central Hall at Tollcross. Central Hall will also host Denial, in which three people make the pilgrimage to Auschwitz; they come not to mourn the victims of the ‘final solution’ but to celebrate its architects. ‘A powerful and disturbing insight into Holocaust denial’, Descent, in which a woman prepares for the last of many journeys, and Dark Lantern, the stories of three saved survivors of the camps: all three shows are Red Card Theatre productions. On 24th August this theme is also explored in Never Again? a conversation looking at atrocities and genocides over the past 150 years and asking whether humanity will ever learn lessons from the past.

And so back to the ‘light’ entertainment – which may be less harrowing but still has its own message. Monica Salvi’s Mad Women in My Attic (‘one woman and her multiple personalities’) celebrates quirky, mad and unstable women in musical theatre, at a time when concepts of madness are being challenged (the excellent Ragged University exhibition Mad World: On Sane People in Insane Situations – on at St Margaret’s House until 21st June – focuses on just this issue; how do we define madness? and how have our changing ‘definitions’ been used to control people we don’t like?) Monica’s message is one of encouragement: don’t be ashamed of your own little quirks of madness, and stop judging others for theirs. Another aspect of this topic is considered in Moving Minds, an exhibition created by MECOPP and Gypsy/Travellers, reflecting on the impact prejudice can have on mental health and wellbeing.

Press Officer Nicky Hawkins explains that one of the Just Festival’s aims is to get back to the original Fringe spirit – affordable events staged by ordinary people. While Just is proud to draw its performers from around the world (and to assist some who would not otherwise be able to travel to Edinburgh – for most of the performers in the ground-breaking After Freedom musical, this will be their first time out of Soweto), it also nurtures new Scottish acts. Formed in the city in 2009, Voice Box Theatre has similar principles – ticket prices are kept down to £5, and the company strives to produce boundary-breaking, challenging, shows that ‘take the risk’. The company introduces young people to the performance arts in schools and community initiatives, and also works in social education and rehabilitation. Fresh from previewing at the uber-cool Knockengarroch, Voice Box’s Escape from Wonderland is a cabaret of vintage and contemporary circus characters; Alice meets them every night – does she really want to escape or not?

Children are always welcomed to the Just Festival, and this year they can hear – and take part in – stories, make crafts, see puppets, try sculpture and printmaking, and see The Two Mountains, a film that asks exactly why we keep on fighting. Babies and pre-schoolers can also enjoy some musical yoga or the exhilarating Bach to Baby concert (book early – it’s very popular).

All festival-goers need sustenance, and who else to provide it at Just than Social Bite? This amazing social enterprise has gone from strength to strength, with two cafes in Edinburgh, two in Glasgow and others planned for Aberdeen and Dundee – they even persuaded George Clooney to come to dinner (and if you want to be there, enter the competition on Social Bite’s website). In August, under the supervision of their fantastic Sierra Leonean chef Michael Thomas, Social Bite will be offering a mouth-watering menu on the Terrace at St John’s, whilst Central Hall will host its own Pop-Up Cafe. Michael will also conduct a cooking demonstration on 28th August, showing you how to make delicious meals on a budget, whilst entertaining you with lots of anecdotes and stories about his industrious colleagues, many of whom were formerly homeless.

Closing the launch, St John’s Rector Markus Duenzkofer revisited the theme of light, speaking of the fire of the Paschal service, the lights of Diwali, the 2015 United Nations Year of Light and the Burning Bush of Moses; the world, he said, is in desperate need of light, yet in these times of environmental crisis, war, homophobia, disasters and suffering it would be easy to give in and let the night swallow us all. But light is stronger than darkness, it will continue to shine; the Just Festival is such a light. The Just Festival programme is available now throughout the city and may also be viewed on the Festival’s website here. Tickets (and places for free events) may be booked via eventbrite; tickets for performing arts events may also be purchased from The Fringe Box Office, 180 High Street. Tickets will also be available on the door, subject to availability. 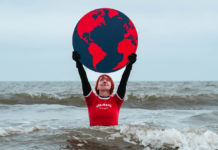