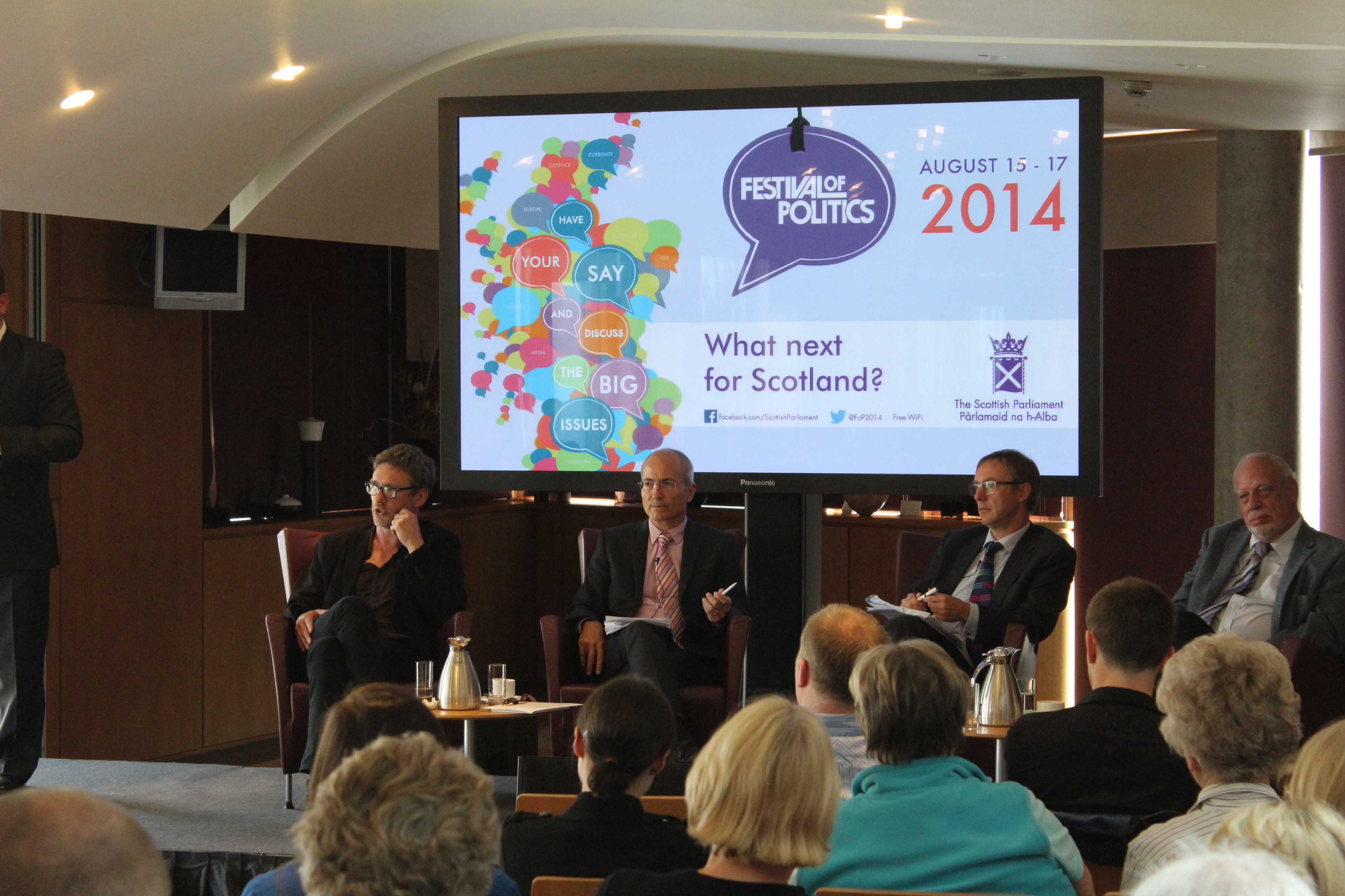 If “Balancing The Books” were a Fringe event, you’d walk in and find face-painted jesters gleefully and precariously posturing paperbacks on their noses, foreheads and any other suitable extremities.

An audience can only dream. No such theatrics were found at the Festival of Politics panel discussion at The Scottish Parliament this afternoon—but the physical fireworks were made up for by dazzling rhetorical performances by the assembled speakers, tackling the fiscal uncertainties surrounding the independence referendum and responding to audience questions and concerns.

The three panellists’ opening remarks immediately set the tenor of the following 90 minutes: a no-frills, participatory panel starring a hard-nosed activist, a diligent academic and a seasoned economic journalist. (Email us if you have a good “So-and-so walk into a bar” joke about such a posse.)

From the social-democratic wing, Common Weal’s Robin McAlpine pointed out that it is a fundamental flaw of many in the current campaign to consider Scotland’s future in terms of its past. A combative – yet extremely well-informed – advocate of Scandinavian-style public spending, McAlpine admitted that raising taxes won’t achieve the social safety net dreamed of by many in his camp. Instead, higher, more equal pay and an industrial economic policy that increases productivity (Britain’s is 16% lower than most developed countries’) will ensure a greater tax base by default. The key? Structural change led by strong public services.

Economist Paul Johnson, director of the London think-tank Institute for Fiscal Studies, purposely approached topics from a UK-wide context. What do the long-run numbers tell us? (We’re talking about the “Books” here, after all.) What can we see from the hinterlands beyond September 18? (Panel chair Charlie Jeffery of the University of Edinburgh later extolled Johnson for his prolific 50-year projections, which I assume is a compliment in the world of fiscal policy.) In a sidelong dig at McAlpine’s dream of a high-wage Scotland, Johnson dutifully pointed out that the UK hasn’t given up on wage increases, it simply doesn’t know how to do it. And that pesky long-run? In a strict numbers game, as the retiree population grows, health spending follows. Currently, one-third of all public spending goes toward health—soon, it will be half.

Journalist and commentator Bill Jamieson was introduced by Jeffery via a “lugubrious” quote from his recent Scotsman article, which essentially foresaw a bleak economic landscape post-September 18, regardless of the outcome. Upon finishing the depressing citation, Jeffery slyly ribbed, “So, Bill, how’s it looking now?”

As chuckles subsided, Jamieson cut through the melodrama: a larger, more involved state actor is nothing without efficiently prioritised public spending. From 2000-2010, Scotland enjoyed a 60% overall increase in public spending (and still has higher per capita spending than the rest of the UK), yet myriad problems persist—the same issues (poverty gap, land ownership, homelessness, etc.) prompting Yes activists to call for higher public spending. The two guides out of this fiscal wilderness—or, as Jamieson called them, “lamp-lighters”— are the Independent Budget Review from 2010, and Jo Armstrong’s work on the efficiency of Scotland’s public services. (Invoking the former, Jamieson got quotational revenge by citing Jeffery’s own comments on questioning Scotland’s uneven allocation of subsidies to various social groups; “Touche!” Jeffery responded.) A thorough journalist accustomed to poring over tomes, Jamieson implored the audience to find the two documents downstairs in Parliament’s library—a homework assignment that I’m unsure was accepted by the majority in attendance.

It didn’t take long for the open question period to lead to the Golden Goose of the referendum campaign: currency and debt. “Well that’s an easy one to answer!” offered Jeffery. “Paul?”
Johnson took a swing at the question of whether or not Scotland should pay its portion of the UK debt upon a Yes vote. Scotland will hold the cards, in such a case, he pointed out—and, legally, an independent Scotland can’t be forced to pay its share of the debt, which is an automatic trump card in post-Yes negotiations (is it fitting or worrisome that the economist used the most gambling metaphors?). The problem, of course, lies not with the legal motivation to pay the debt—an estimated £120 billion, costing £4 billion in interest every year alone—but in the perception of Scotland by the international community. If Scotland chooses to renege on its share, foreign lenders may shy away, or increase interest on the loans that are enacted.
The buck was passed to McAlpine, who claimed that a post-Yes Scotland should pay its share—but it should be dubbed a “British Aid Payment.” The ensuing laughter topped any audience response so far, but a macabre undertone lurked beneath: if you admit that the UK is in such shambles that it needs foreign aid, you might need to come to serious terms with that sentiment upon a No vote next month, which seems more and more likely.
The next jab came not from the panel, but from the audience. Addressing the pay gap between men and women, a participant pointed out that the panel was entirely composed of men—something she had noticed at last year’s Festival of Politics, too. Thankfully, Jeffery was quick to acknowledge that a female panel member was on the books until a few days prior, when she pulled out (mercifully, it wasn’t mentioned who among the current three was a last-minute replacement).
The panel approached the gender gap problem in economic, not social terms. Equal participation by both genders would be more of a boon to the UK and Scotland than nearly any other economic influx, said McAlpine, adding, “The oil will run out. Here’s to hoping that the women don’t.” (It’s worth acknowledging that this and the British Aid comment decisively won McAlpine the Most Humourous Panelist award, if that counts for anything.) Women tend to find more part-time work, according to Johnson, but in the public sector fare far better than in the private sector—a bump for those (ahem, McAlpine) fighting privatisation.
The panel finished with a curt discussion on the weapons at Trident (a moral question for Scots, according to Jamieson), nationalisation (or “collective ownership,” as McAlpine likes to call it) and the NHS. (There is a paradox inherent in Scottish health care: more is spent on health in Scotland than the rest of the UK, but a high level of complaints persists. Would this improve if it were outsourced? Cue a return to the debate over privatisation in three, two, one…
If you missed this joust, don’t fret. The Festival of Politics continues throughout the weekend, culminating on Sunday with discussions on EU Membership and Immigration (surely, those won’t get heated). If the Fringe is more your thing, have no fear as musical acts intersperse the lectures and panels, if you need a break from the heady content here and there.