Christmas is a good time to have fun enjoying all the attractions and traditional markets that the city has to offer, but also a time to sit back and chill out too.

Scotland’s capital offers a wide variety of options to delight cinema lovers, from well-known cinema chains to art-house film venues. Do you need help deciding what to watch? Here are The Reporter’s top five recommendations. Not all of them are typical Christmas-themed films, but here are some of the best films of the year. Peter Jackson’s highly anticipated prequel to the successful ‘Lord of the Rings’ Trilogy is now playing in theatres worldwide and promises to delight the imagination of J.R.R Tolkien’s tales followers. Set in the familiar fantasy world of Middle-Earth, the film follows the adventures of the Hobbit, Bilbo Baggins (Martin Freeman) who is hired by the wizard Gandalf (Ian McKellen) to accompany a group of 13 dwarves on their quest to reclaim the Lonely Mountain from Smaug, the dragon.

It is the first film in Peter Jackson’s trilogy adaptation of the 1937 novel ‘The Hobbit’ and marks the return to the ‘Lord of the Rings’ universe in a hyper-realistic way as never seen before. Jackson is a pioneer in the use of High Frame Rate (HFR) technology that delivers more realistic viewing experiences to the audience. Opposed to the traditional 24 frames per second (fps), the Academy award-winning director shot ‘The Hobbit’ at 48 frames per second, in order to provide the viewers with, according to his own words, “an incredible and immersive experience”.

‘The Hobbit: an Unexpected Journey’ is currently screened at major multiplexes and independent cinemas across Edinburgh. It can be watched both in 2D and 3D formats. ‘The Impossible’ is a mind-blowing drama directed by award-winning Spanish filmmaker Juan Antonio Bayona, best known for directing his acclaimed horror film ‘The Orphanage’. His latest film is based on the true-life story of a Spanish family of five (portrayed as British, in the film) who spent most of their Christmas holiday coping with the devastating consequences of one of the worst natural disasters in modern times: the 2004 great Indian Ocean Tsunami caused by an undersea earthquake in which over 230,000 people died.

‘The Impossible’ tells the real-life tragedy of a Spanish doctor named María Belón (Naomi Watts) who, along with her husband Henry (Ewan McGregor) and their three sons find themselves fighting for their own survival and trying to help tens of thousands of strangers in their same situation. Rather than showing a more panoramic view of the disaster, the film focuses on the family’s efforts to find each other again after they are split apart by the tsunami waves. This emotionally engaging film places the family and the human being at the centre of the story.

Bayona needed four years of preparation, 25 weeks of shooting and a 30 million Euros budget to create this inspiring and heart-breaking story of self-sacrifice, love, survival and compassion where the wild nature stands in as the major antagonist.

The film harvested critical acclaim on its world premiere at the 2012 Toronto International Film Festival in September 2012. In Spain, the film was released on 11 October in over 600 theatres, grossing $11,569,306 on its opening weekend (the highest-grossing opening weekend ever for a film in Spain). In October, Bayona received the Emerging Visionary Award at the 48th Chicago International Film Festival for ” bringing fresh insight, dynamism, and humanity to familiar genres”.

This English-language Spanish film is set to be released in the UK on 1 January 2013.

Further details can be found clicking on this link. Academy award-winning filmmaker Ang Lee has taken on the big screen adaptation of Yann Martel’s best-selling novel to create a groundbreaking film about courage, endurance and faith. This magical adventure story focuses on a young man, named Pi Patel, who survives a disaster at sea and is hurtled into an epic journey of discovery with an unexpected lifeboat mate, an adult Bengal tiger known as Richard Parker. The plot unfolds with the narrator, Pi, the precious son of a zoo keeper. He tells the story as a grown man and goes in and out of flashbacks of his childhood and his journey across the ocean.

To bring the novel to life, Lee needed an estimated $120million budget and a splendorous combination of the most impressive and breathtaking visual effects.

Ang Lee’s ‘Life of Pi’ arrives in Edinburgh’s theatres on the 20th December both in 2D and 3D formats.

Win a trip to India! To celebrate the release of ‘Life of Pi’, the Odeon is raffling a trip for two to India.  The prize includes return flights from London to Cochin, private transfer, 4 nights in a 4-star hotel including breakfast, private boat tour in the waters of Kerala including private cruise aboard a traditional Kettuvallam. For your chance to win this prize, simply book ‘Life of Pi’ online before 20th December. Full details available here. ‘Midnight’s Children’ is an epic film from Oscar-nominated Canadian filmmaker Deepa Mehta, based on Salman Rushdie’s ‘Best of Booker’ prize winning novel of the same name. This Canadian-American production deals with India’s transition from British colonialism to independence and the partition of British India. Considered Mehta’s most ambitious film to date, ‘Midnight’s Children’ is a visually pleasing depiction of significant events in Indian history as they are interlaced with the personal tale of the protagonist: Saleem Sinai (played as an adult by Satya Bhabha), a man with magical capabilities whose destiny was marked from birth.

The film revolves around two boys born at a key historic moment. “At the stroke of midnight on August 15, 1947, as India proclaims independence from Great Britain, two newborn babies are switched by a nurse in a Bombay hospital. Saleem, the illegitimate son of a poor woman, and Shiva, the offspring of a wealthy couple, are fated to live the destiny meant for each other.” (Source: The film’s official website)

As they grow up, the two boys benefit from a mysterious telepathic bond as their lives become intertwined and are inextricably linked to India’s tumultuous journey of achievements and failures.

“Christmas at our House!” Series of films Edinburgh’s foremost independent cinema celebrates Christmas with a season of seven films being screened under the “Christmas at our House!” theme.

From Friday 15 to Monday 24 December, they will be showing the following all-time festive favourites:

For full details about the exact screening times and ticket prices, click here. 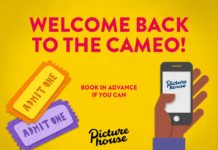 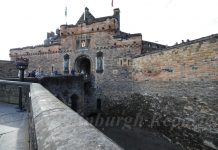 Mary Queen of Scots to be premiered in Edinburgh