The City Art Centre is hosting two exhibitions over the Christmas and New Year period.

The Edinburgh Reporter spoke to tapestry artist, Fiona Hutchison, who has work which will be displayed in both shows.

“I’ve had a passion for the sea since I was 12,”‘ said Fiona. “The sea and everything associated with it, its folklore, its poetry and the voyages made over it, are the inspiration for my work. I was born in Newhaven and the harbour was the place I used to hang around. My father loved messing around with boats and built some dinghies. At home my mother did embroidery so both of them were ‘makers’. All this has fed into my work.”

Fiona has several large tapestries in the ‘That was then : this is NOW’ exhibition. Sixteen tapestry makers of STAR (Scottish Tapestry Artists Regrouped) are involved and the show includes work from the 1960s up to the present day. “We chose this title because we hope to show how our weaving has evolved over a long period,” Fiona explained. “Edinburgh is known as a centre of excellence for tapestry and we are all graduates of the former Tapestry Department of the Edinburgh College of Art which had a very open approach to the medium. A group show is a good idea because of the length of the tapestry making process.”

As well as exhibiting large scale works, the artists selected a common format to show samples of their work. In this part of the exhibition these little jewels are a good way to appreciate the dazzling invention and skill gathered here. Fiona’s pieces deconstruct tapestry. In one of them the wefts leap in and out of the warps lightly, like dancing swirls of froth.

In Fiona’s case the oldest of the larger works is “Fastnet 79”, a tapestry marking the yachting race which was hit by storms. There are references to the geography and meteorology woven into the work, as well as marks representing the yachts, which seem to indicate the tragic outcome of the race. The CAC acquired the piece when the Edinburgh College of Art graduates put on their degree show in the gallery. “This was a tremendous boost for me as a young graduate,” she said. Another tapestry, “The Wave” hails from her postgraduate period. This one is imposingly, extraordinarily wide, its focus a massive wave which hasn’t yet broken. The weaving reflects the breadth of the horizon and captures the power and menace of the sea. Its thick, knobbly yarns, the hairiness and roughness of the wefts and muted, tweedy colours of the piece seem very Scottish. A later work, “Tide Line”, has more intense colours. The reds, blues and greens evoke the shapes and masses of the harbour. Fiona has also contributed to another exhibition on the top floor of the gallery. This show entitled “Reflection”, highlights artists and makers who have been supported by the Visual Arts Awards and Craft Maker Awards run by the City of Edinburgh Council. There are examples of painting, sculpture, printmaking, photography, installation, film and new media as well as ceramics, glassmaking, jewellery and textiles from emerging and established artists of the city’s thriving art and craft sector.

“These awards are a great help for artists and craftworkers,” she commented. “The application process is fairly simple and the grants allow you the space and time to develop aspects of your work.”  The tapestry on show here, “Where Two Tides meet” shows her recent work which is concerned with the play of the light on the surface of the sea. In it lighter blues and whites imitate the shimmer of the sun combined with the movement of the water.

Both exhibitions are free and there’s also a full programme of events and workshops for adults and families, a great way to do something creative on dull winter days. The “That was then : this is NOW” exhibition runs from 12 November 2011 – 8 January 2012 and “Reflection-Contemporary visual Arts and Crafts In Edinburgh” is showing from 19 November 2011 – 12 February 2012. 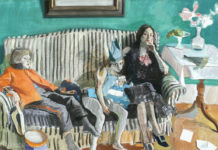 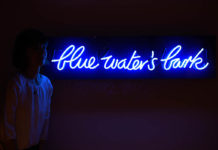