The Law Society of Scotland believes that despite containing useful information for property buyers, Home Reports are not helping sales.

The Law Society gathered the views from its members across Scotland to compile a response to the Scottish Government’s interim review of how Home Reports are performing, following their introduction in December 2008. Introducing such reports at that point in time, and to the Scottish system where offers could easily be made ‘subject to survey’ without discrimination, was perhaps always questionable.

In its response, the Society acknowledged that a number of solicitors said the Home Report was a useful marketing tool which provided helpful information for prospective purchasers at minimal or no cost. However it maintains that there are problems with the system, some of which are undermining the confidence of participants and adversely affecting Scotland’s conveyancing system.

Janette Wilson, convener of the Law Society of Scotland’s conveyancing committee, said: “Solicitors are integral to the whole buying and selling process in Scotland and from the feedback we’ve received from our members it is apparent that some of the objectives of the system have not been met, namely the improvement of the quality of housing stock and the elimination of multiple surveys.

“The multiple survey problem seems to have been transferred from property ‘hot spots’ to areas where it is more difficult to sell and people have required to update their report before making a sale. This has added to the cost of moving home for many. For others, the cost of obtaining a report has presented a barrier to the market, particularly those on lower incomes who want to sell their property quickly. Where a sale has been agreed the mortgage lender often insists on an independent valuation which the purchaser has to pay for. This delays the sales process and causes uncertainty for buyers and sellers as well as adding to the overall cost.

“We think that removing the mandatory requirement for all sellers to include a single survey in the Home Report and instead making it a voluntary feature, would markedly improve the situation in the Scottish property market.”

The Society’s response can be read in full on their own website. 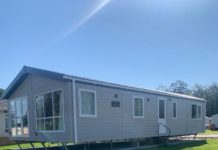 Downsizing? – have a look at the property of the week at Camelot Holiday Park