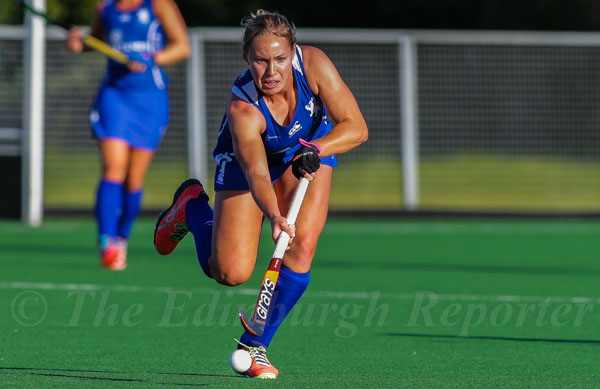 Whatever happens in today’s (Sunday) fifth/sixth place play-off with Canada in the Commonwealth Games in Birmingham Scotland women are on the way up.

That’s the view of Sarah Robertson (pictured), captain of the Tartan Hearts, ahead of the clash with the North American side who are ranked No 15 in the world, two places above the Scots.

Robertson remains up-beat despite a 2-0 defeat by world No 3, Australia, in their last outing in the competition in midweek.

The Olympian, who won bronze in Tokyo with Great Britain, is determined to end the tournament on a high with a win over Canada which would also earn valuable ranking points.

The Borders-born former University of Edinburgh star has recovered from the bruises she received against Australia and said: “Nobody gets much space against them, and we were shut off in the wide areas, so we had limited opportunities when we got the ball, but they spend hours and hours and hours practising pressing.

“We are just not used to that level of opposition and they cover the ground so quickly.”

And the 28-year-old from Melrose added: “A 2-0 defeat to Australia is, realistically, not a bad result for us as they have just won a bronze medal at the World Cup.”

Scotland have enjoyed great support during the tournament at the University of Birmingham and Robertson, who plays for London club, Hampstead & Westminster, said: “The support from the fans has been absolutely amazing here.

“We felt it so much. Four years ago we were in the Gold Coast in Australia and we felt really distant at the other side of the world, but here we have felt that people have followed our journey.

“Credit to us, we have given them a journey they want to follow and be part of so, overall, a huge thanks to everybody who made the trip.

“Now, we have one more game to keep supporting us and we aim to end of a high.”

During the Games tournament, Scotland have beaten South Africa 4-2 (ranked No 20 in the world) and Kenya 11-0 (No 37 in the world) and lost to two top ten teams, 1-0 to New Zealand (ranked No 8), after a goal was controversially chalked off by the video review judge, and 2-0 to Australia.

Canada finished third in Pool B with six points thanks to a 4-0 win over Wales, a 1-0 defeat to a strong England side who meet Australia in the final today (SUN), and 8-1 win over Ghana and a 3-2 defeat to losing semi-finalists India.

Scotland’s captain said: “We have come so close here against top teams New Zealand and Australia, but it is a steep learning curve for us.

“The teams we played in the build-up have been ranked between ten and 20 in the world but here we have played two of the teams ranked in the top ten in the world.

“I would have liked to have played the top ranked teams before we got here, but we, as a team, are heading in the right direction and I feel really positive about the way forward.”