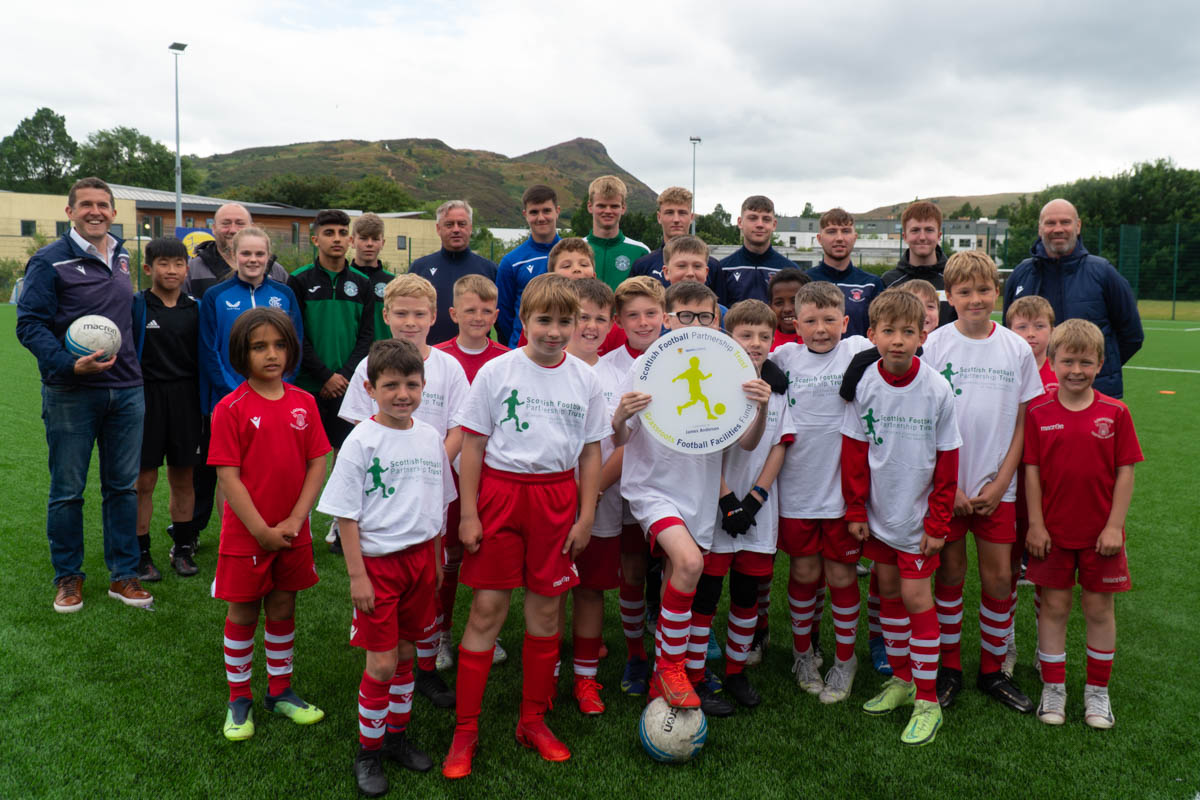 Following the fundraising campaign which began only last year, the players at Lochend Football Academy stepped out onto their newly laid 3G pitch recently as part of an official opening ceremony when sponsors and funders were invited along.

The new pitch installed by Sportex Group has replaced a 12-year-old surface which had become almost unplayable, and offers a new sustainable facility for the next decade.

And in good news only officially confirmed on Friday the OneCity Trust has made a further £5,000 available to the academy from the 2022 OneCity Trust Main Grant funding programme. This will be used towards their project to provide free football camps and coaching sessions for children.

David Pollacchi, a member of the committee and one of the team coaches, has been firmly at the helm of the funding effort which has resulted in the lush new green surface now in place.

Mr Pollacchi said at the opening ceremony: “When we started about 14 months ago to speed up our efforts to replace the pitch, we didn’t realise how much people were willing to help and support, and we’d never have been able to do it without that help. We now have a first class surface in place to support a community of high deprivation for at least the next 10 years.

“As we move forward we continue to do things better and to work with partners who share our common community ethos. I’m absolutely delighted to announce that we are partnering with Farmer Autocare to help the younger children in the Academy and at local schools. Pride of place now at the Academy is the Farmer AutoCare proud sponsors of Lochend Academy board. So we are absolutely thrilled with that, We really have, you know, a gem of an academy here at the heart of a wonderful community and thanks to all the help we’re well placed for the future.”

David used the occasion to thank everyone from the club bookkeeper Gill to Elaine at the OneCity Trust, The Scottish Football Partnership Trust, Graham Croucher of The City of Edinburgh Council, Jen Malone and Karen McConnell of the SFA, Viridor Credits through the Landfill Trust, Microsoft and Benevity. Social Bite, Dr Susan Brown of Edinburgh Napier University for her help in getting undergraduate coaches to Lochend, Sportex for the pitch and Farmer Autocare for their strip sponsorship. He even kindly gave The Edinburgh Reporter a mention for kicking off their media coverage last year.

David told The Edinburgh Reporter the pitch cost £68,000 in total to replace the entire surface working with top class manufactures. He said: “Sportex have been really helpful throughout the entire process. I think this allows us to have a future. The previous pitch was not in a fit state. So for the next ten to 12 years we have a sustainable facility in place. That allows children from the area to be able to enjoy football and hopefully we can bring more players through that will achieve the levels that the likes of Emma Watson has at Rangers, and Adam Khan has at Hibernian FC and others at Falkirk and St Johnstone too. The future looks bright.”

Lochend is one of the most deprived areas in Edinburgh according to the Scottish Index of Multiple Deprivation (SIMD) 2020. The football academy created originally in 2008 is just inside Lochend Park in the heart of the community and attracts children and young people from the local neighbourhood. It is more than a club where football is learned and played as this is a strong community where health both mental and physical is improved by positive activity.

Jimmy Urquhart explained that the club had begun 17 years ago with just six children. He said: “It just grew arms and legs. Some of our players have moved on to get contracts with big clubs but that is not what it is all about. There are more who don’t make it. This facility is more of a community base. I know a lot of the people who live in this area which is very deprived. There is not a lot of money here and the local kids come in to use this pitch too. We don’t keep them out so it is very used. I think this is the best academy in Edinburgh.”

Emma Watson (16) a former young player with Lochend had the honour of cutting the ribbon. Emma now plays with Rangers first team. She explained that Lochend was a great place to learn to play football in her earlier years.

The centre midfielder said: “I played seven or eight years here at Lochend before I moved to a girls team. I am currently training and playing with the first team at Rangers FC. This season I haven’t played so much but looking forward to next season and scoring even more goals.

“I learned loads here at Lochend. The quality of training is excellent and I think training and playing with boys is brilliant. I really enjoyed my time at Lochend. Jimmy is a brilliant coach, you can’t fault him.

Farmer Autocare is now supporting the club by sponsoring the strips for the 5 to 8 year olds who train at Lochend. The club would like all of their older teams to also have strips provided for them, so there are still sponsorship opportunities available for local businesses.

David Pollacchi would be delighted to hear from anyone in the position of supporting the club in this way. Contact him by email on lochendfa@outlook.com

Stuart McCaffrey who began his playing career with Hibs is now with grassroots football grant funders, The Scottish Football Partnership Trust. He said: “We invest into the game on a range of projects, facilities, education, training and community outreach. We have a diverse portfolio of projects. I came out to see David at Lochend and yes the pitch was very well-used and needed to be replaced. We funded just under 50 per cent of the facility and the surface replacement. This is a big improvement to what the kids now have to play on.”