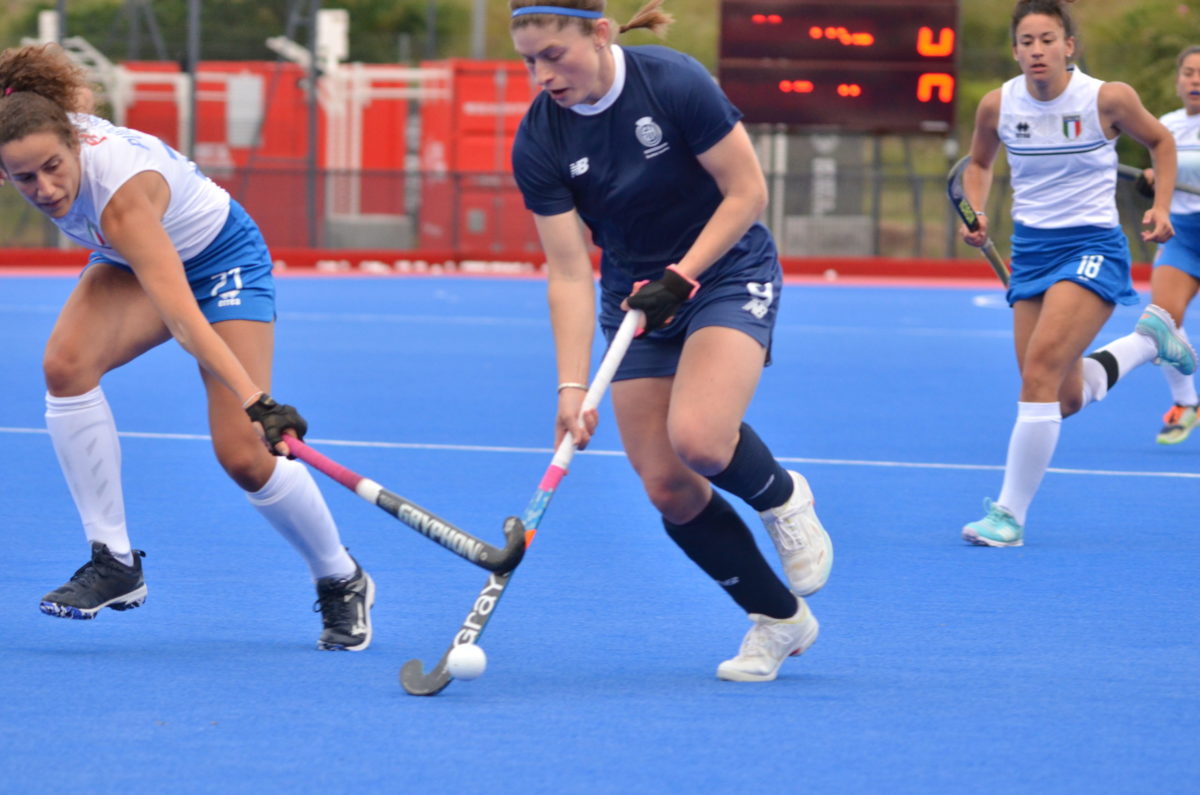 Katie Robertson believes that Scotland’s women’s hockey team took more than team building from a fun day with the Army.

The Freuchie-raised player feels that lessons learned during team building at Edinburgh’s Redford Barracks can be applied to their sport.

And Scotland’s vice-captain, who is a PE teacher at Dollar Academy, revealed that she had her eyes opened during the visit.

The midfield player (pictured in blue top) with The University of Edinburgh said: “It was a brilliant day. Yes, we learned about the physical demands of the Army and the physical training.

“Things were explained that we didn’t expect and we found that the Army is different from what we see from the outside, so it was really interesting.”

Team building exercises formed part of the day as did a meeting with the Queen’s Shetland pony, which was a highlight for Robertson who won the European Showjumping Championship with Team GB aged 13.

In fact, she only took up hockey after a bad fall from a horse while showjumping and didn’t have the confidence to saddle-up again.

The squad finished by being VIP’s at Edinburgh Castle for the firing of the One O’Clock Gun.

That was, said the former sport and psychology student at Abertay University, a lovely ending to a memorable day and the 25-year-old added: “We can definitely use some of the information we gleaned from the Army visit, the work that they do, and introduce that into what we do in training.

“We heard about teamwork and communication during that day and that information is transferrable to what we do.

“We, as a team, also came closer together that day and so it was a most worthwhile exercise.”Now the 18-strong squad prepare for the bus journey to Birmingham on Friday before facing key PCR Tests.

That could, said Robertson, could be a long process, then the team moves into the village.

She added: “There is a lot of juggling to get an international team to a venue and the coaching staff has done a great job.

“Hopefully, it will be a smooth process when we get down there and that all the bags will arrive at our rooms.”

All the hard work has, she said, been completed in training and the squad are now homing in on July 29 when they open their campaign against South Africa, ranked No 16 in the world, two places above Scotland who are No 18.

She said: “We are looking at them in detail now, but there are three other games to be aware of. In training, we are ticking over now and we are really excited to get into that first game.

“Our aim is to go out there and win all of our games, but we have to go from there.”

Playing in Britain has advantages, argued the Fifer who said: “There are lot of factors when you are travelling abroad.

“For us, this is as close to a home Games as many of us are going to get and our understanding is that we will have lots of supporters there as well. That will be lovely. Also, acclimatization should be easier considering we are down in Birmingham.

“Moral in the camp is really good, We’ve been training hard the last four or five months and we have used past experiences to develop our game.

“We’ve played lots of fixtures and I believe we have progressed. Now, we want to get down there and get started.”