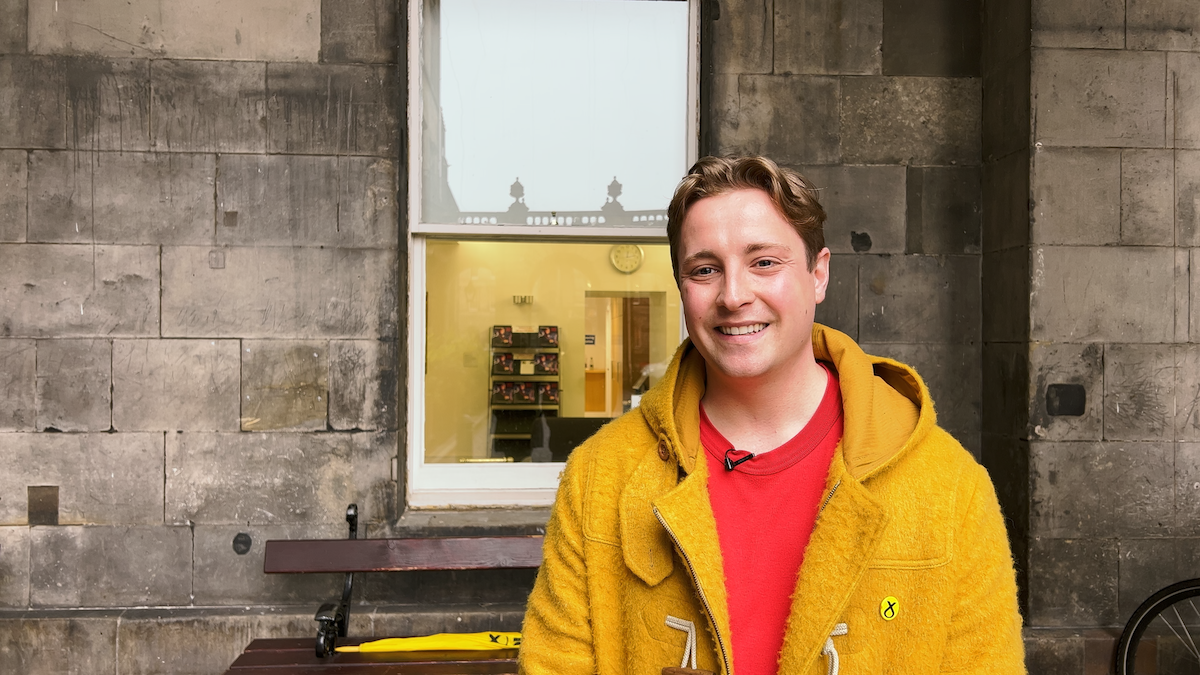 Cllr Finlay McFarlane now works with a bank helping small businesses to recover after the pandemic, but he began his career in pantomime with the pantomime greats – the late, great Andy Gray, Grant Stott and Allan Stewart.

By chance, I interviewed him in the very same spot in the quad at the City Chambers where I had photographed the three panto stars while they were being received by the Rt Hon Lord Provost. I explained to Finlay that the then Lord Provost, Donald Wilson needed little encouragement to don his red robes for the photo, and the trio were as charming and funny as they always were.

McFarlane’s first ever paid professional work was at the King’s Theatre for the Christmas season of the pantomime which he described as “an amazing institution”. Now he has joined another institution, although its greatness or power to amaze is always under scrutiny and critique from the public, and pantomime is a word often used to describe what happens there.

He has been elected as the SNP councillor for the City Centre ward, retaining the seat held until recently by former Finance Convener, Alasdair Rankin who has retired from the council due to ill health. Finlay has high hopes for making a positive change.

He admitted the first week or so was like going back to school, setting up new emails and learning who everyone is, but says that his employer is very supportive recognising that their employees getting involved in the community is a really good thing.

He said: “I want to use my life experience, being in the council chambers as a younger person, and as a foster brother, someone who’s worked in the arts and in small business support. I really want to use that expertise and kind of life experience that I’ve built up through those years, and give a voice for younger people as well who are often missing in action in council consultations and surveys.”

He recognises that the climate crisis comes very high up his list of priorities but regards his role as making Edinburgh a place where everyone shares the wealth that the city produces, something I have heard the SNP group leader, Adam McVey say more than once.

Councillors do not have to live in their wards – which is just as well as Finlay explains it is just too expensive for him as a young person to live in the city centre. He said: “There is a huge challenge for younger people in terms of housing and rent prices for young people. In a climate crisis you don’t want people living far away from their place of work, but in London, for example, what’s happening is that people are having to move further and further and further away from the bars, restaurants, cafés, or wherever the office is that they work in.”

He is keen to be in touch with all the community councils in his ward, and when we met he was just going through the induction phase and learning what the job is all about. He said he promised at several election hustings that he would be at the meetings, and also out chapping doors. He said:”That’s not just for elections. It is important to be accessible to people who maybe don’t have the time to go to their community councils or write to me.”

The City Centre ward includes several community councils and residents associations – including rather unusually the Murrayfield Community Council, but he is mindful that there are four councillors for the ward and they may divide the tasks.

His top priorities will include action on short term lets. He said: “I think there has been an element of hollowing out and some residents are the last in their stair. I think we really need to think very hard about addressing that and making sure that people don’t feel isolated at the top of their tenement block, or have safety concerns about the comings and goings.”

On street safety he said: “I am a gay man, and we’ve seen a rise in hate crimes across the whole of the UK over previous years. I think we have a real moral responsibility to make everybody feel safe. That could be my female friends out running in a park at night, and then turning around halfway through the run, because they don’t quite feel safe. The city belongs to everybody. It’s the community that owns the city spaces.

“How we can plan, how we can street lighting and how can we work with the police and community people to make the streets safe, accessible for everybody to inhabit and kind of shared community ownership of our public realm? So my personal aim is to make Edinburgh suitable and safe for everybody.”

Finlay is quietly eloquent, and his determination to do the best in his new job shines through. It is early days of course but he could be a star in the making at the City Chambers.