George Heriot’s School is an Edinburgh landmark. Its towers and turrets rise above the narrow streets of the Old Town, its alumni have succeeded in every sphere. The school was established in 1628 and now a new novel tells the fascinating life story of the school’s founder, jeweller to the King and one of Edinburgh’s most famous sons.

In The Queen’s Lender Jean Findlay gives us a wonderful insight into life in 17th century Edinburgh and London, and in particular the extravagant, intrigue-ridden, courts of James Stuart and his Danish consort, Anna.

The story begins in 1593, when both the King’s and George Heriot’s wives are pregnant.  Queen Anna, who is just 17 years old, loves jewels, and James – desperate for an heir – is ready to indulge her every whim, so Heriot is a frequent visitor to the palace. He and his own wife, Christian, live above his workshop in Fishmarket Close.

“It is past midnight and the Royal Mile is brisk with life. Shouts and laughter, the hum of warm and ribald talk in the tavern next door. A slice of fiddle music each time the door opens…Fishmarket Close, a smelly wynd but narrow and steep so the bones and guts from the fish shops will sluice downhill in the rain.”

Findlay excels in conveying the nature of a place, be it the Queen’s own private chamber, an Edinburgh close, a fragrant garden, or a claustrophobic cabin in a ship at sea. We are there, we smell the flowers and the fish, we see the vomit.

Heriot’s life will run in parallel with Anna’s; for he is not only an acclaimed jeweller, who loves precious stones for their beauty rather than their acquisition, but also a canny man of business. Through all the ups, and the many downs, of his working life he will keep meticulous accounts, and he is shrewd in his dealings with the court. No sooner has he made a new piece for Anna or James than every courtier wants one; fashion is all. At the palace clothes and jewellery convey not only rank and status; they send messages. Everything is symbolic. Ambitious courtiers compete to assert their importance;  Heriot charges them in advance, and far more than he charges the King. His wealth increases. Anna gives his rings as gifts to visiting ambassadors; his work is seen all over Europe.

Anna, meanwhile, has no idea about money, so Heriot lends it to her. It comes back to him as payment for his work, and he still owns the debt, carefully recorded in his ledgers. He becomes, in fact, her private banker. George may bear physical similarities to Anna’s James:

“But (he is) a much gentler version, and one that listens.“

And there is one more glaring difference: Heriot balances his books, while the King and Queen spend with reckless abandon, which in the end cannot fail to lead to trouble.

These are violent times and the King is permanently suspicious (as well he might be, given the fate of his mother, Mary Queen of Scots) and, especially after visiting his in-laws in Denmark, obsessed with the dangers of witchcraft. He sends ‘witch hunters’ out into East Lothian to track down these wicked females. He orders witch trials and tortures, and interrogates the accused women himself. He even writes a book about it, Daemonologie (which later provides material for Macbeth.) Later, at masques in London, armed guards protect him. He and his courtiers speak in riddles, never quite meaning what they say. When, on James’ accession to the English throne, the Scottish court (and the Heriots) move to London, William Shakespeare becomes Court Playwright, and we are made even more aware of the fashion – and the need – for elliptical,  oblique, dialogue.  This is the way business is done, and life is led, at court.

“All is seen. All is known. They are all being watched.“

Most of the characters in this story are real, from the King himself to Shakespeare, Ben Jonson and Inigo Jones. A few have been invented for the good of the story, but so well imagined are they that they are every bit as convincing as the names with which we are familiar. Chief among them is Lady Marjorie Boswell, top rank manipulator and George’s wife’s sister-in-law. He handles her with extreme caution and keeps Christian away from her:

“A queen bee must not only succeed herself, she must arrange that other women fall.”

But perhaps Lady Marjorie is simply doing what she can with the hand she’s been dealt; she reminds me a little of Becky Sharp. For when Findlay looks at the position of women in the 17th century, very little of it is good. Queen Anna may live a privileged life, but in return she must churn out potential heirs at a rate of knots – for many will not survive. She has no privacy, even in childbirth – instead the room is full of courtiers (to make sure the baby is not a ‘switchling’) who sit around eating, drinking and chatting while she endures her labour. For them it is theatre. For Anna, it is agony. She thinks of the ‘witches’ she saw tortured and burned in her native Elsinore. Many women die in childbirth, many infants are stillborn or die in infancy. Midwives and other women who help women are frequently accused of witchcraft – Anna dreads this happening to her own midwife.

And even if mother and child survive, a queen’s babies are not her own. They are immediately dispatched into the care of others. Anna’s Henry is sent to the Earl of Mar at Stirling Castle, partly for his education, partly for his protection. These are dangerous times.

Politics, and especially political relations between European countries, must be considered, and improved, at all times to avoid war (James is all for peace) and protect trade. But, as is said over four centuries later, it’s complicated. Spain wants an allegiance with Scotland to put James on the English throne, and marry Prince Henry – James’s heir – off to a Spanish princess. But Spain is a Catholic country, and James has renounced his Catholic faith, partly to impress Elizabeth I, though he treads a fine line, and loathes Puritans. (Anna is less keen to give up the faith she was born to; James receives constant complaints about this, with the courtiers even saying that Anna’s favourite gentlewoman must be a Catholic ‘because her brother is a poet’…) Catholics are persecuted; an horrific incident on a journey from Edinburgh to to London illustrates all too well what vicious cruelty such persecution can take. In an effort at appeasement (for he sees himself as a version of Solomon, and takes his Divine Right to rule very seriously) James commissions his own translation of the Bible; needless to say, more arguments ensue.

In the taverns, Ben Jonson hears talk that may ring more than a few modern bells:

‘We English need separation, independence, none of your wet alliances with Spain….England has never liked Europe….We do not need them, we can fight the world alone.’

When the court moves to London, relations between James and the English courtiers are not always smooth. They mistrust him and struggle with his Scots dialect; they automatically assume that England is more important and powerful than Scotland. Anna’s name must be changed to Anne. James, in turn, packs Ben Jonson off to walk to Scotland, and insists on having porridge for breakfast.

As the court’s extravagance reaches new heights, Heriot – who profits greatly from the King and Queen’s excess – begins to question this flagrant waste; there are, he knows, much better uses to which money could be put;

“Heriot hears that…the Masque of Blackness..cost over £100,000 – enough to build a palace, or to educate the whole of Edinburgh.”

The seed of an idea is sown. And as Heriot’s eventful life draws to a close, he makes the plans that will lead to the foundation of a school and also a hospital:

“The main school will be called a hospital to cure the faitherless bairns as well as teach them. They cannot learn if they are sick.”

The Queen’s Lender may be set in the 1600s, but its themes still resonate today. It is about power, suspicion, religious strife, persecution and conspiracy, but it is above all a very human story, one of love, loss, suffering and endurance, and of a thoroughly good man, the benefits of whose philanthropy are still felt in 21st century Edinburgh. In the words of the King’s Fool:

“Curtain rise, and curtain fall, but the story goes on, and nothing finishes.

A most enjoyable book, fast-paced, informative, gripping and beautifully written, The Queen’s Lender by Jean Findlay will be published by Scotland Street Press on 14 February 2022. 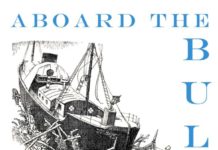