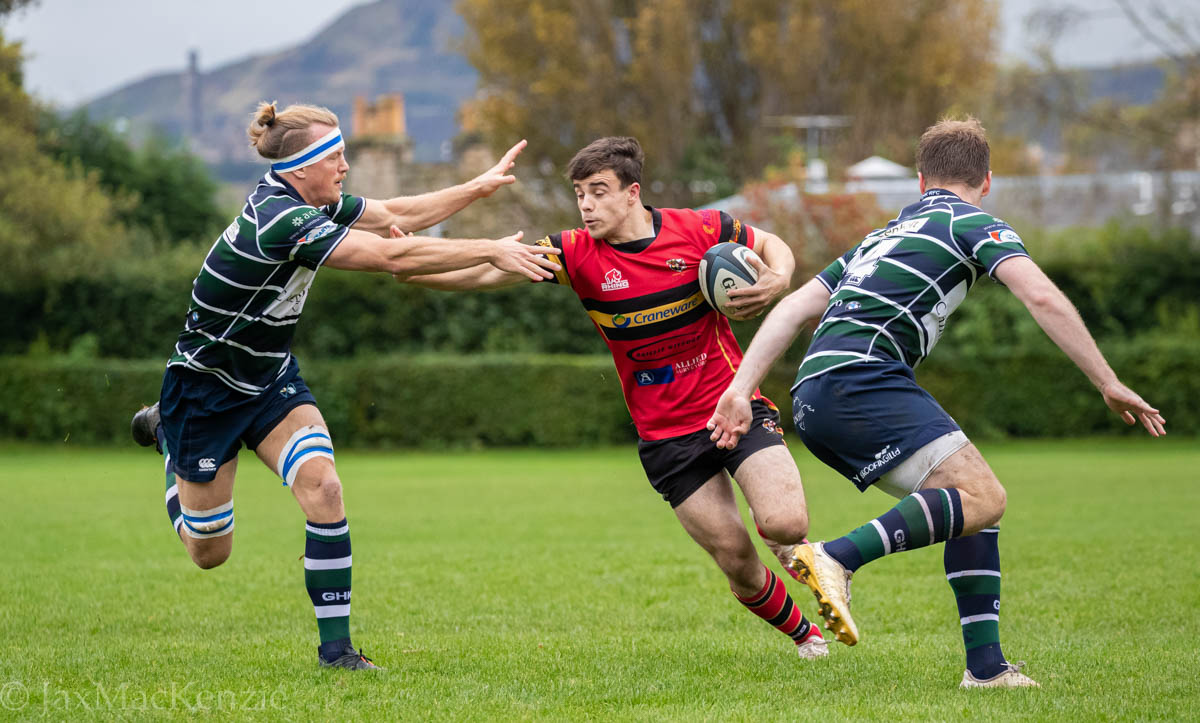 GHK made the trip through from Glasgow to Inverleith last Saturday to face Stewart’s Melville in the latest round of Scottish Rugby’s Tennent’s National League, Div. 2.

Within 10 minutes of the start Stew Mel were up by 7 points courtesy of Niall Hall (former GHK) and Euan Bowen’s boot. But these were early days and with nothing in it GHK took advantage of a penalty and some territory before coughing up possession due to a knock on.

The resulting scrum, on the half way line, set the tone for what was to come as the home side’s pack completely dominated that aspect of the set piece from start to finish. Chris Baikie, Danny Morrison, Darren Miller, Roo Mitchell and James Bradley all took their turns up front and were absolutely outstanding both in the set piece exchanges and also in open play too. Danny Morrison being, easily, the finest forward on the park.

But despite working on rations on the back foot, GHK were soon back in attack mode with their right winger looking particularly dangerous. An injury to Jamie McGurk, with around 20 minutes played, meant Kyle Henderson was introduced once more as GHK continued their attacks using the full width of Inverleith at every opportunity.

A penalty soon came their way and the decision made at this stage of the game, rightly or wrongly, was to take the three points. 25 minutes in the score was SM 7 – GHK 3.

An aerial contest then followed the restart with Stew Mel temporarily winning and retaining possession and although GHK regained, they knocked on. Another scrum, which by this stage SM were beginning to get the upper hand, and with that came the penalty. As good as their scrum was, the line-outs didn’t quite work to their advantage allowing GHK some breathing space and a penalty award this time in their favour.

The visitors’ attacks continued both left and right but only to be penalised. When the referee’s decision was questioned, he marched them back in no uncertain terms! It wasn’t long before the first yellow card appeared and with five minutes left in the first half, the one-man advantage was exploited with SM’s Willie Malcolm burrowing over to leave the half time score at SM 14, GHK 3.

As the second half resumed in earnest, Captain Momo was unfortunately taken off after a head collision leaving him in the stars momentarily and forcing him to retire to be replaced by Ally Scott. As the numbers were soon back even, the contest sprang into action once more with three tries coming within a period of no more than 10 minutes.

First GHK, after a deft chip, touch down for an unconverted try. Then it was the turn of SM, after a break down the blind side by the ever-present Willie Malcolm, who gave Brendan Scott space before off-loading to the rock-solid George Lee, who touched down. Sixty minutes in SM 21 – GHK 8.

It wasn’t long however before GHK were given a similar opportunity with slick hands allowing former SM winger, Jack Sommerville, to run in, unconverted. SM 21 – GHK 13. It was now time for Ruaridh Mitchell to shore up the home scrum for the final fifteen minutes.

As waves of GHK attacks continued Stew Mel’s defence coped well and when the final whistle eventually came it brought the curtain down on a pulsating match.