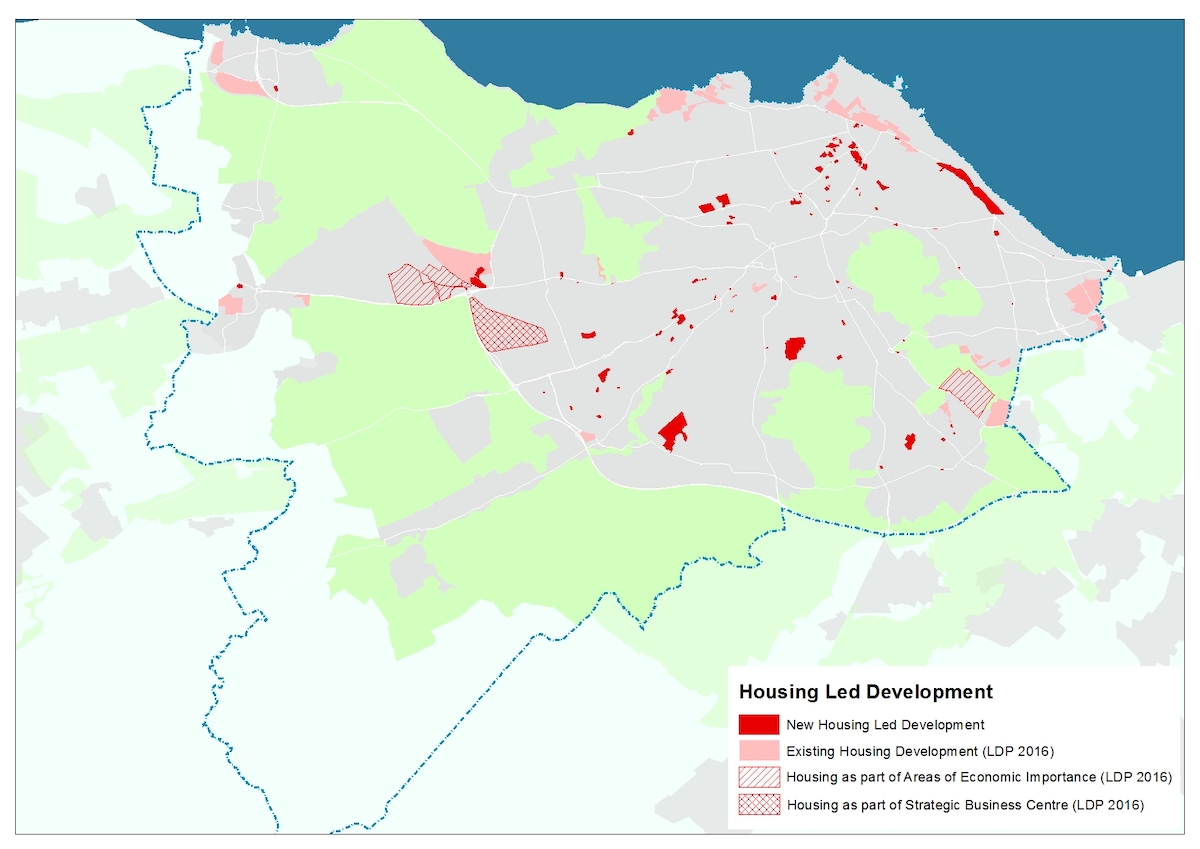 Edinburgh Council is to adopt a brownfield first strategy in its new local development plan which has now been drafted, and is part way through the adoption process.

In addition, Edinburgh will focus firmly on the relatively new concept of the 20 minute neighbourhood according to the Choices for City Plan 2030.

The planning convener, Cllr Neil Gardiner, pointed out when talking to The Edinburgh Reporter that Edinburgh’s roads are already congested and there is a real need to do things differently. Cllr Gardiner also emphasised that developers will also have to think differently when planning housing or other schemes, but transport is critical and it is much easier to implement a 20 minute neighbourhood strategy in the city boundary rather than on greenfield sites. He described this as a recalibration of planning strategy and said that there is sufficient land within the city boundary to allow development of the housing required.

The possibility of development – for example that at Calderwood on the edge of the city near Jupiter Artland has effectively been ruled out with this plan, and the council will focus on the urban area where services and schooling are easier to provide.

Sites such as the former council site at Murrayburn will be easier to develop from an infrastructure point of view, although it is probably true to say that a greenfield site is always more attractive to house builders as there is no need for demolition or fitting their development into the city’s infrastructure jigsaw. The plans for a new Currie High School, the Wester Hailes Healthy Living Centre, the tram and bus routes all mean that this is a preferred site where the council can fill in the gaps and connect communities such as Wester Hailes. The development community is expected to “kick back” against the move and the council’s chosen direction, but the council is firm in its resolve.

The council will also work to protect the green and blue network in the city such as The Water of Leith and the city parks as they recognise the value of such natural assets for everyone’s wellbeing. There has already been a public consultation on the City Plan.

The plan will be discussed at this week’s Planning Committee on Wednesday and, if approved, will then move to the statutory six week period of representation. It is a long process which began in 2018 when the planning committee set out its overall objectives.

The council has to draft a Local Development Plan (LDP) and keep it up to date every five years, and while the greenbelt sites already allocated in the existing LDP will remain in place there will be no new greenbelt allocation, so constraining the footprint and the boundaries of the city. The document in draft form can be read here – but a word of warning it is hundreds of pages – but very useful if you wish to focus on one area of the city only. You can also read the draft city plan which is embedded below.

Cllr Gardiner said: “This proposed development plan can recalibrate how development happens in this city, positively shaping how our Capital grows and changes over the next 10 years and beyond.

“Rather than growing forever outwards, the proposed plan focuses on developing new communities on brownfield land which mix living, working and leisure uses. These locations utilise and add to already existing infrastructure. This plan is about us as a city collectively making the right decisions now so that our residents can make reasonable and informed choices about how and where they live and how they get around in the future.

“City Plan 2030 has been developed taking on board the views of residents, businesses, and other stakeholders from across the city to help us meet our core priorities for Edinburgh: making Edinburgh a sustainable city, which supports everyone’s wellbeing and enables our residents to access homes they can afford. The plan also facilitates travel options and networks so that residents won’t have to own a car to move around, while having every opportunity to share in their city’s success.

“Our proposal of mixed-use communities in the plan aligns to Scottish Government’s 20-minute neighbourhood vision, which is especially relevant now as the global pandemic continues to make massive changes to the way people live their lives. This includes how we all use and appreciate green spaces with the health and well-being benefits they bring.

“Community resilience also includes easy access to facilities and neighbourhoods need a mixture of services within easy reach such as shops, health and education, as well as the potential to find a job near where you live.

“We also need to rethink how we accommodate our growing population and I believe that our emphasis on prioritising brownfield land and making the best use of the limited space we have is the right approach.

“In the west a new neighbourhood with a mix of uses within easy walking distance is to be created. This is also well served by existing infrastructure, with the tram running through the community as well as a mainline station. This area was previously designated largely for business development in the 2016 plan.

“Other significant sites across the city will all require masterplans ensuring that in each case the whole is much more than the sum of the parts, better meeting the needs of new and existing communities.

“Going forward we need to work with developers asking them to rise to the challenges of rapid climate change and finite resources. Developers need to think more carefully about location, using the land we have available effectively, with sustainable design. This proposed plan better connects existing communities through development of underused brownfield land. We need to protect Edinburgh’s beautiful green setting from the Pentlands to the Forth, increase biodiversity, physical and mental wellbeing, reduce flooding and other climate impacts, and improve air quality.

“Developers will need to make sure that one third of their houses in residential developments are affordable. We will also continue the city’s own programme to build affordable housing.

“Edinburgh currently has almost a third of all short term lets in Scotland, policies included in the plan help us to take further action and manage these. This quantity of commercial use puts pressure on house prices and rents and takes much needed houses out of supply as well as causing issues such as anti-social behaviour, leaving hollowed out communities.

“Last year, we set out bold preferred options in Choices for City Plan 2030 alongside other viable alternatives which were considered during the public consultation. This had a massive response with around 1,800 contributions. I’d like to thank everyone again who submitted their views. We’ve listened carefully to the feedback provided and through regular meetings working with colleagues across all political parties throughout this process, I’m hopeful through this proposed plan we can agree on a positive way forward for Edinburgh at committee next week.”

Councillor Maureen Child, Planning Vice-Convener, said: “To meet our ambitious climate change target and become a carbon neutral city by 2030, as the city continues to grow, we must develop differently in the future and our proposed plan sets out how all houses and other buildings will need be much more energy efficient.

“We’re already committed to building 20,000 affordable and low-cost homes by 2027 but the city desperately needs more housing. That’s why our proposals put particular emphasis on land for housing and affordable homes. We’ll also make sure that we protect people’s homes by making sure appropriate flood defences are in place for all new developments as we’re fully aware of the risk of flooding and the other impacts of climate change.

“Our rising population and the climate emergency were already posing huge challenges for us as a Council and the current health pandemic has greatly accelerated many changes to our lives – I believe our proposed plan takes account of these major societal transformations we’re currently experiencing.

“Connectivity is of course central to our success and our other aim is to guide development towards areas where facilities such as schools and healthcare centres already exist. Where these need to be developed we’ll listen to the needs of communities, taking them with us, as new neighbourhoods develop. Our Transport and Environment Committee has also already agreed our City Mobility Plan designed to improve sustainable transport over the next decade.”

Councillors on the Planning Committee will consider the proposed City Plan 2030 on Wednesday 29 September before final representations are sought. These will be considered by the Council before it is submitted to The Scottish Government for Examination. The Council can then consider adopting the plan to shape how the city develops over the next 10 years. You can watch the webcast for the Planning Committee this week here.