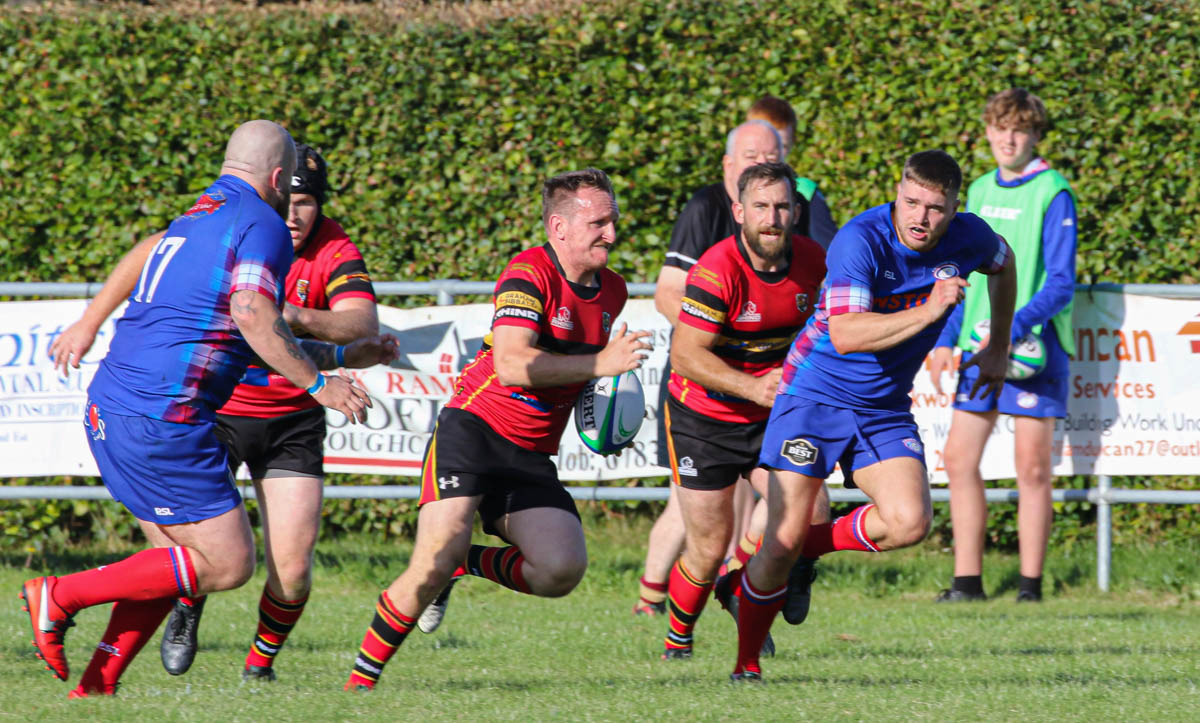 Back on the road again and, after the disappointment of the previous week, it was smiles on the faces of all our players, coaches and supporters alike come 4.45 pm at Beveridge Park. Let’s be honest any of us would have taken a bonus point win against a gritty Kirkcaldy side before kick-off.

It was though a solid team effort in a side that remained largely unchanged from the previous week with the only exceptions being James Ferguson back on ‘ home turf ‘ and Euan Bowen starting at fly half.

Beveridge Park was simply buzzing in the sunshine with strong local support mixed in with a sprinkling of the SM faithful on the touch lines.

It was Kirkcaldy though who got things going early on territory wise but SM collected and cleared. The home side’s line-out ultimately resulted in a knock on and a scrum. From that Scott Alldritt made familiar progress picking up and driving to the half way line, coupled with a testing kick by Fraser Strachan, followed by another line-out on Kirkcaldy’s 22.

A familiar passage of play then ensued and although SM lost possession, a penalty was awarded for a high tackle. SM were soon back to where they had been and a successful forward drive saw Danny Morrison getting over the first try of the afternoon. Euan ‘Happy’ Morrison slotted the extras as he did all afternoon. Eight minutes played Kirkcaldy 0 – SM 7.

The pendulum then immediately swung back the way of the home side as they applied pressure resulting in a penalty and kickable 3 points. Kirkcaldy 3 – SM 7. It was early days for both teams as Geoff Angco retrieved a Kirkcaldy kick making inroads with Euan Bowen and Willie Malcolm in support together with the ever-present Danny Morrison. Unfortunately, the end result was a penalty to Kirkcaldy.

Angco then had to retire due to a shoulder injury received in the process. His replacement Brodie Miller brought youth and exuberance for what turned out to be an enthusiastic and impressive debut. SM were soon back in the driving seat though using width and were awarded a penalty culminating in a line-out and a drive by the forwards culminating with Scott Alldritt touching down for his first try of the afternoon. 20 minutes played Kirkcaldy 3 – SM 14.

It wasn’t long however before Kirkcaldy returned the favour with a converted try at around the 25 minute mark Kirkcaldy 10 – SM 14. Kirkcaldy’s heads were certainly up at this time and their formidable pack exerting considerable pressure. A penalty was ultimately awarded but they opted to take the three points on offer. 35 minutes played Kirkcaldy 13 – SM 14. A bit close for comfort.

This prompted an immediate response from Stew Mel as James Ferguson powered through giving Scott Alldritt another opportunity this time under the posts. Kirkcaldy 13 – SM 21. An attritional period of play then took proceedings to half time with no change in the score line as Kirkcaldy again opting to kick for three points but this time failed. Half time Kirkcaldy 13 – SM 21.

Stew Mel started the second half well with Morrison’s boot once again finding territory and a short line-out around the halfway line. His probing kick followed however did not quite find touch giving Kirkcaldy the opportunity to attack once more and with a penalty being awarded, they also attempted to find touch but failed giving SM the opportunity to apply further pressure. The line-out and scrum resulted in Kirkcaldy being awarded another penalty and again they took the three points but were still playing catch up with about 55 minutes played Kirkcaldy 16 – SM 21.

Our fitness was beginning to show at this stage however Kirkcaldy were still well in the fight but perhaps the next score around the 60 minute mark, knocked them back as Fraser Morrison drove over the line with the reliable boot of his cousin, Euan, keeping the points ticking over. This score was preceded by an exceptionally good passage of play by both forwards and backs keeping the ball alive and forcing the hosts back into defensive mode. Kirkcaldy 16 – SM 28.

It was only at this stage that the SM support could be fairly confident that the win was coming as Willie Malcolm was off at the toot together with Fraser Strachan, who involved at every opportunity, provided the try that sealed the win and the bonus point came courtesy of Darren Miller.

It was certainly a forwards’ day with regards to the try scorers although Strachan was instrumental with his sniping runs and tactical box kicks. He was a real thorn in Kirkcaldy’s side, combining well with, Man of the Match, his number 8 Scott Alldritt. What a player and what an afternoon for both.

Whilst the back row and front row justifiably take a lot of the plaudits, let us not forget Fraser Morrison and Jamie Sword in the boiler house . A fine combination of leadership and hard graft! 65 minutes played Kirkcaldy 16 – SM 35.

Stew Mel were now in control and the final 15 minutes were played out with maturity despite Kirkcaldy’s desperate attempts to bridge the gap, which they could have done, it wasn’t to be.

This league is as predictable as a penalty shoot-out. Saturday was a good result and a hard fought one at that.

As an old Chinese proverb says, “That man does not trip over a mountain, he trips over a stone”. Hopefully our only stone we encounter was Peebles on this lengthy journey. Home advantage next Saturday, on the hallowed turf of Inverleith, against our visitors Preston Lodge will be another tough one.