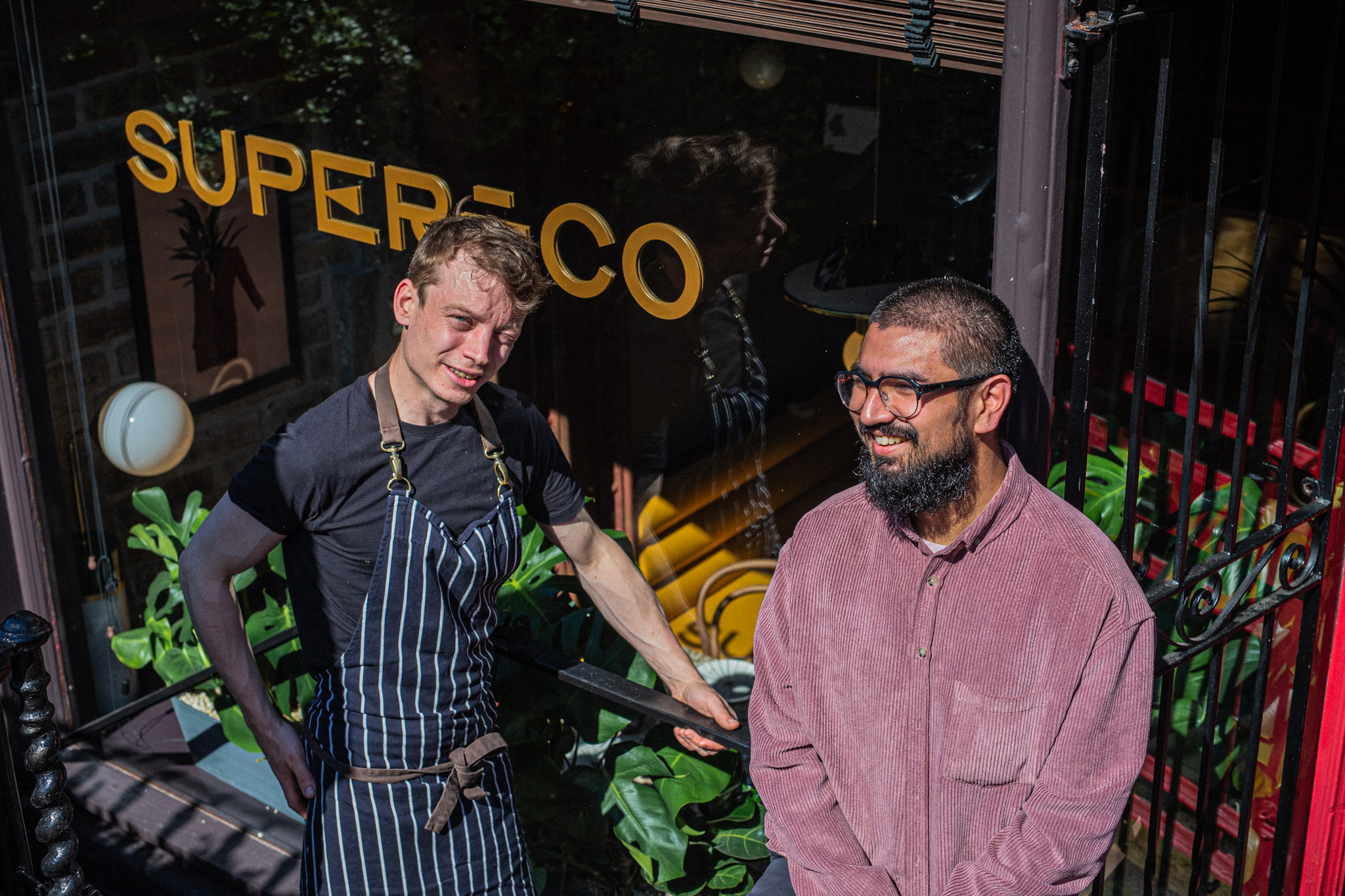 Arriving at Superico, the old 99 Hanover St bar, I feel immediately out of place.

They’re playing cool music I don’t understand. If it’s not on Smooth Radio I’ve never heard it before.

However, it’s not long before our friendly barman and I discover I’m in the wrong place and he gallantly walks me to the other Superico, the restaurant version a few doors up. They’re playing Alexander O’Neil: normality restored.

Previously a trad family Italian restaurant, La Laterna, it’s been transformed into a rather lovely contemporary space featuring South American delights. Stone walls, comfortable seating and soft lighting, what’s not to like? I also prefer my dining companions to be interesting, so I’ve recruited my Edinburgh Reporter colleague Stephen Rafferty as my plus one for the evening. An ex crime reporter, I’m hoping he might give me the juice on the naughty side of Edinburgh.

We begin with a cocktail, of which the menu is fresh and imaginative. I opt for a Negroni under the “Frozen” section and am assured its not a boozy slush puppy but simply super chilled. Stephen chooses the peach version, how very metrosexual. He probably buys his clothes in Zara.

The drinkypoos pack a reassuring punch and we’re onto the menu which is as creative as it is brief. I’m always more trustful of a menu that knows when to reign in the amount on offer. Here you can have small sharing plates or a proper meal.

We order a random selection of small plates and one modest Oyster for me. If the food’s going to be adventurous the chat has to be too. I ask Stephen what his favourite crime story of his career was. “Probably Saunas.” Now were talking.

Delving into the seedy underbelly of Edinburgh is quite refreshing during the most cultural month of the year. I have some dodgy info of my own to contribute, namely the supposedly abandoned Edinburgh fruit and veg shop that’s actually a fetish dungeon. Before you go booking your hen nights there, you have to have some sort of diploma to hire it, or at least a first aid certificate.

The food in Superico comes out “as its ready”. Whoever the chef was who invented that concept should get an MBE for services to making lives in kitchens easier. Some super tasty Patates Bravas arrive first followed by Palm Hearts with Cauliflower Puree and Raisins, then Asparagus and Heritage Beetroot with Candied Hazelnut and Soft Boiled Egg. All fresh, perfectly cooked and well dressed.

We’ve paid little attention to what we ordered and were intrigued by something that looked as if it came off a coral reef but turned out to be Tempura Enoki Mushroom with Tarragon Verde, Roasted Garlic and Truffled Pecorino. The Crudo was also good, basically a chunkier Steak Tartare with citrus, soy, chilli, shallot, caper and chircharron.

I couldn’t fault any dishes but the star of the show was the Tiradito: sashimi cut sea bream, avocado, mango and blood orange, tiger’s milk and coriander oil. I can only presume you milk a tiger with its express permission. If you worry these dishes sound too complex, I can assure you they are delivered with a delicate touch. The lily is not over gilded here.

My oyster dressed in jalapeño, lime and coriander was delicious and I’ll keep it to myself whether or not it worked. Dinner was washed down with a lovely bottle of Fiano and polished off with a shared Banana Tarte Tatin, which was a tad on the soft side for me but delightful none the less.

The pair behind Superico are chef Scott Wyse and Mike Lynch, who were part of the team which launched the Devil’s Advocate in the Old Town. Scott has worked in a number of respected kitchens and during a four year spell in charge of catering at the MTV Music Awards, he plated up across Europe for leading rock and music stars, including Mark Knopler and Taylor Swift. Award winning mixologist Mike, formerly of Bramble, is the man putting the fizz into Superico’s cocktail, aperitivo and spritz offering.

Superico offer two small plates with a cocktail or glass of wine for £18 all day Wednesday and Thursday and until 6pm Friday to Sunday. With cooking this confident, friendly service and top-notch ingredients, that’s a real bargain. As for the low life chat, you’ll have to bring your own.
Superico, 83 Hanover Street, telephone 0131 225 4862.